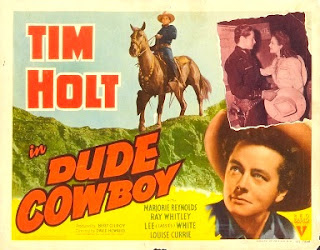 This B-western with Tim Holt is an entertaining mix of the genre’s usual elements, with some excellent western swing songs by Ray Whitley. Holt is a likable presence on screen and bears a resemblance at times, in both looks and temperament, to the young Roy Rogers.

Plot. Holt is hired by the G-men to find a kidnapped engraver (Byron Foulger), whose disappearance is linked to the passing of counterfeit money at a dude ranch casino near Silver City, Nevada. The missing man’s daughter (Marjorie Reynolds) turns up at the ranch in search of her father, about the same time as Holt.

The two find him slaving away in a cave, where the casino owner (Eddie Kane) has set up the counterfeiting operation. Holt’s true identity is discovered by Kane, whose henchmen take Holt prisoner. He escapes, and a chase follows an exchange of gunfire. Holt and Reynolds rescue the exhausted Foulger, and the sheriff apprehends the crooks.

In a comic subplot, a hawker of patent medicine (Lee “Lasses” White) attracts the attention of a dude ranch guest (Helen Holmes) who gamely pursues him. Discovering that he and Holt are being held captive, she inadvertently helps them get away. Attempting to follow them as they leave the ranch, she saddles and rides an uncooperative mule. In the end, she has become owner of the ranch and brings in a parson to tie the knot with White, who quickly heads for the hills.

Tim Holt. Still in his early twenties, Holt doesn’t quite have the stature of other cowboy stars. There’s a boyish quality about him, and he laughs often, in a way that suggests wholesomeness and decency, but also inexperience. A sidearm on his hip is more of an accessory than a weapon. You hope he doesn’t have to use it. Costuming him in a bulky coat and a flat crowned hat tends to diminish his already diminutive size. But he looks comfortable on a horse. You have to give him that.

Holt’s obvious youth may be what allows him to duck a romantic involvement with either of his female co-stars. A brassy blonde at the dude ranch (Louise Currey) sets her eye on him and comes on strong. But he politely evades her come-ons. As he and Marjorie Reynolds rescue her father, it’s all business between them. He rides off at the end saying he’ll call, but there’s no reason to think he will.

Tim Holt had been a juvenile actor, growing up the son of Jack Holt who was a film actor and whose extensive career began with the early Silents. By the time he’d become established in B-westerns, Tim Holt had already appeared as the cavalry officer in John Ford’s Stagecoach (1939).

The peak of his career would come later in the 1940s, with roles playing Virgil Earp in My Darling Clementine (1946) and in The Magnificent Ambersons (1942) and The Treasure of the Sierra Madre (1948). It should also be noted that he was a decorated member of the Armed Forces during WWII, receiving the Purple Heart among several other honors.

Wrapping up. As an example of the genre, the script by Morton Grant and direction by David Howard are both competent and confident. Grant wrote a dozen westerns during the war years of the 1940s, sharing credits for the 1943 adaptation of Clarence Mulford’s Bar 20 (1943), which starred William Boyd as Hopalong Cassidy. Howard had directed numerous B-movies in the 1930s, and his career stopped in mid-stride with this his final film before his death in 1941.

Playing opposite Holt was Marjorie Reynolds, whose long career in both film and TV included the role of Peg Riley in the 1950s TV series, The Life of Riley. A familiar and distinctive face in the cast is character actor Byron Foulger as the kidnapped father. Foulger is credited with over 450 screen roles over a film and TV career of more than four decades.

The film was shot on ranches in Thousand Oaks and Simi Valley and in the Bronson Caves of Griffith Park. The period in which the story takes place is that ambivalent Hollywood mix of Old and New West. The train in the opening scene looks modern, but there are no automobiles, and transportation is provided by horse-drawn wagons. Meanwhile, the dude ranch is served by a telephone, and the women characters are duded out in 40s-style western outfits with 40s hairstyles.

For real added value, the film features tunes sung by Ray Whitley, manager of the western singing group The Sons of the Pioneers. Whitley wrote music for numerous films and is remembered for Gene Autry's signature song, "Back in the Saddle Again." Here's a clip of Dude Cowboy with Holt and Whitley.

For more of Tuesday’s Overlooked Movies, click over to Todd Mason’sblog.