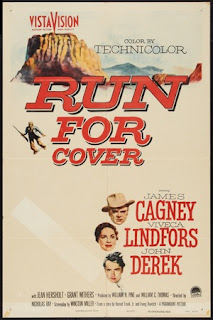 Cast often as a tough guy, James Cagney is full of surprises. In this western from director Nicholas Ray, he plays a thoughtfully patient mentor of a young stranger (John Derek) he meets on the trail. Shot in the mountains of New Mexico and Colorado, the film achieves a kind of visual majesty, while the story it tells is a simple one of love and friendship.

Plot. In a plot contrivance that’s more than a little far-fetched, Cagney and Derek are taken to be train robbers and come into the possession of a company payroll. A posse with a trigger-happy sheriff opens fire on them as they ride to the next town, disabling Derek, whose shattered leg keeps him off his feet for several weeks.

Taken in by a Swedish farmer (Jean Hersholt) and his daughter (Viveca Lindfors), Derek is nursed back to health, while Cagney looks after him and helps out on the farm. Tender affection develops between Cagney and Lindfors, but Derek reacts badly when he discovers he’ll never walk without a limp again.

Cagney is offered a job as sheriff of the town, and he enlists Derek as his deputy. But the young man is not up to the responsibilities given him by the well-meaning Cagney. First he allows the town folk to lynch a prisoner while Cagney is out capturing another wanted man (Ernest Borgnine). Later, he lets Borgnine escape.

A big bank robbery in town finds everybody in church, where one of the thieves recognizes Cagney as an ex-con who was once a prison cellmate. Persuading the citizens who hired him that he’d done time for a crime he didn’t commit, he keeps his job and takes a posse out after the robbers.

The tracks lead to forbidding badlands, and everyone turns back except Cagney and Derek, who turns out to have been enlisted by Borgnine as an accomplice for the gang. In the ruins of an Indian pueblo, Cagney confronts Derek as a miserable excuse of a man and a disgrace to his gender. Then, thinking Derek is drawing on him, Cagney shoots him down.


Themes. In another director’s hands, this would have been a different film. Ray, remembered today for Rebel Without a Cause (1955), finds the tenderness in many scenes. Cagney brings a gentle note of caring for the young man he’s taken under his wing. The love that grows between him and Lindfors is warm and quiet without being sentimental.

The script was by veteran screenwriter Winston Miller and based on a story by two more veteran writers, Harriet Frank, Jr., and Irving Ravitch. It uses elements of the traditional western to portray how a man achieves (or fails to achieve) manhood. While Derek’s character shows the eroding effect of a weak will, Cagney’s is revealed as the man with what it takes to overcome a checkered past.

He is good humored, patient, and trusting. He rarely raises his voice or gets angry. While Cagney could be all steely toughness, as in Tribute to a Bad Man (1956), here he brings a fatherly quality to his portrayal of a strong man. Losing his temper in one scene with Derek, who lies whining on the floor because he can’t walk, Cagney returns afterward to apologize. And he is left with regret at the end when he realizes he’d lost faith in the young man, when there was still something in him of courage and the will to do the right thing.

The story is also played out within a social context, as the script and camera often highlight the citizens of the little mountain town. They offer the sheriff’s job to Cagney after finding the incumbent less than professional. And they can act unthinkingly, as when Cagney returns to town to learn they have hanged an outlaw without benefit of trial. 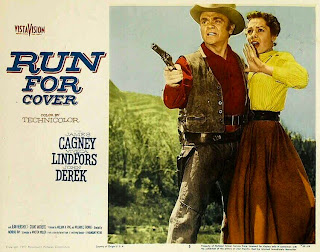 Wrapping up. The title of the film, Run For Cover, has a double meaning. Placid as the world may ideally seem, one must take cover when life depends on it. But real life requires courage at times to bravely face misfortune and unwelcome risks. Cagney won't let Derek give up because of his disability. And while others get cold feet when the going gets tough, he shows his mettle. He will not run. We find a similar idea in another film from the same period in Hollywood, High Noon (1952).

Nicholas Ray made a few other westerns, The Lusty Men (1952) about rodeo cowboys, Johnny Guitar (1954), and The True Story of Jesse James (1957). This film shows him willing to downplay the violence and gunplay of the traditional western to focus on regular people simply attempting to live decent lives. It’s a film enjoyable for its small pleasures and the way it plays expectations against realities.

Run For Cover is currently available at netflix and amazon. For more of Tuesday’s Overlooked Movies, click on over to Todd Mason’s blog.