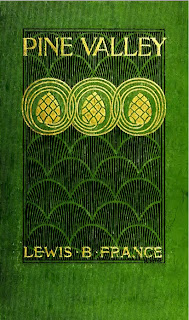 Here’s another collection of mining camp stories, set this time in the gold fields of the Colorado Rockies, in the 1860s. The heyday of the gold rush in Pine Valley has already passed, and the slopes of the surrounding mountains show a history of abandoned prospect holes and mines. There is already new growth among the stumps of trees once cut for timber.

Only die-hard prospectors continue to hang on here. A hotel and a saloon are still in operation. Mail and the occasional passenger come in by buckboard once a week, and inhabitants are snowbound during the winter months.

Structure. The stories are loosely connected, with a couple characters, Hank Ballard and Baltimore Hatch, appearing in most of them. We meet Ballard in the first one, “One Winter at the Gray Eagle Mine,” which tells of how he came to be the foster parent of a small boy, Clay Dickey.

Ballard carries within him the memory of having been the last person to see his partner and his partner’s wife alive. Both die in an avalanche, set off by an explosion in the partners’ mine. Snow thunders down the mountainside, crushing the young couple’s cabin. Only their infant son is found alive when the community digs down through 20 feet of snow to find them.

Character. Ballard and Hatch make an interesting contrast. In “A Prayer for Baltimore Hatch,” Ballard loans $10 to Hatch, who wins big at faro and is affronted when Ballard declines to split the winnings. He only wants back his $10. Baltimore is insulted by this violation of his code of ethics.

Feeling guilty for holding onto what he regards as Ballard’s share, he works out a way to relieve his conscience. At Christmas, he provides a turkey stuffed with gold nuggets and a diamond pin, plus a watch on a gold chain inscribed to the boy, Clay. Thus, all is square again between the two very different men, but the principles of neither have been compromised.

Tone. The stories are a mix of harsh realism and sentiment. In “On His Honor,” a young man called “the Kid,” appears in the Valley in poor health. He’s been sent by his family to be superintendent of their mine, the Mississippi Belle.

Uninterested in the mine, he falls under the influence of Baltimore Hatch’s faro layout, gambling away all his funds, while his health worsens. Hatch takes to looking after him, seeing to his comforts, even offering to winter with him in Cuba. The Kid, however, expires.


Women. Miners’ wives are referred to with kindness as “women with whom vicissitudes had held close communion and upon whom Time had bestowed no favors.” Julie, in “His Harvest,” is an exception at the camp in Blind Horse Gulch. Her social standing is reflected in her appearance:

The fair hair, half uncoiled and hanging loosely; a light-colored silk dress soiled with many spots of grease and in disorder; the little slippers down at the heel; the cheeks inflamed, and the skin flabby under the eyes; the dry lips parted, disclosing two rows of pearls, the only beauty in harmony with the sweet laugh.

A drinker, her beauty faded, she has a curious hold on a neighbor and prospector, Rocky Henderson.

Rocky is met in the street by a woman who has just arrived in camp on the mail wagon, who calls him “Charlie,” but he declines to acknowledge her. Word quickly gets around that she is his wife. The force of public opinion in the camps is strong in the defense of a woman who, like Rocky’s wife, has preserved her respectability.

The men at Blind Horse Gulch form a “committee” to set matters right. Even Rocky’s partner, York Maxwell, walks out on him, calling him a liar. Shame, confusion, or fear of something worse drives Rocky out into the night. There he stumbles into a mine shaft and is found dead and decomposing some days later by his partner.

Narrative style. France’s fly-on-the-wall narration expects his readers to pay close attention, with a willingness to connect any loose threads on their own. A prime example is the final story, “And a Little Child Shall Lead Them,” in which some bags of ore belonging to Hank Ballard go missing during the night in the dead of winter. Julie lets him know with a note that she has knowledge of where the ore has been hidden and who took it, but she won’t reveal the name of the thief.

Baltimore Hatch offers to help find the culprit, but in what seems like an unconnected development, he comes down with pneumonia and dies. And we’re given to wonder whether Hatch contracted pneumonia while stealing Ballard’s ore himself.

Wrapping up. Lewis B. France (1833-1907) left a handful of his writings, chiefly dealing with hiking and fishing in the mountains of Colorado. A Dictionary of American Authors identifies him as a Denver lawyer and “littérateur.” A novel, Over the Old Trail, was published in 1895. A short collection of sketches, Scraps, appeared in 1899.

Pine Valley is currently available at google books and Internet Archive, and for the nook. For more of Friday’s Forgotten Books, click over to Patti Abbott’s blog.

Photo credits: From the first edition