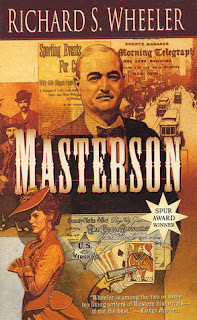 The West sucked up men and women from the East for the few decades that it was the frontier, and of those we remember today, most never returned. Some settled somewhere, often California; some kept drifting; a lot simply died there before they got old. Few went back East to productively live on into the Twentieth Century. William Barclay “Bat” Masterson was one of those.

Richard Wheeler finds him in this novel in the year 1919, in what would turn out to be one of Bat’s few remaining years. Plagued with diabetes, he’s hard at work as a newspaperman in New York, where his chief concern is the imminent arrival of Prohibition.

The Old West has long been folded into the pages of history, and of all the men Bat knew back then, only Wyatt Earp seems still to survive. If the Old West exists anywhere at all, it’s on the miles of celluloid pouring forth from Hollywood.

Plot. Wheeler’s novel is structured as a personal journey as the aging Bat packs up with his common-law wife Emma to revisit the West he once knew. It’s not exactly a sentimental journey. Bat is a New Yorker. He hangs out at the Metropole drinking with the likes of Damon Runyon.

The journey west starts as a quest for the truth about his life, since legends seem to have taken over the facts. Legend would cast him as a gunslinger and heroic lawman, with how many men killed? Twenty? Thirty?

In fact, he knows of only one, for sure. And that was defending the life and honor of one of his countless sweethearts. Another man died resisting arrest, but Bat’s may not have been the bullet that killed him. There was some Indian fighting, too, which may have produced some casualties, but the rest is legend, and Bat seems to be the only one willing to accept the fact.

Traveling by Pullman to Dodge, then westward to Colorado, and eventually to California, Bat finds that any embarrassing memory of the bad old days has been obliterated. The brothels, of course, are gone, but even the saloons and variety halls have been torn down. A highlight for him and Emma is meeting William S. Hart, who gives them walk-on parts in a western he is shooting. A visit with Wyatt Earp proves to be unrewarding, as the grumbling old man seems stuck under the thumb of his wife, Josie.


Legend vs. history. Wheeler isn’t just interested in the ironies of memory. Bat comes to understand that history itself is unable to capture the truth of a past one remembers from his own experience. No matter how faithfully he describes it to someone who wasn’t there, they get it wrong.

He puzzles over three things (which puzzle us still today): a) how Americans bury and reject their past; b) how they instead create official legends that glorify it; and c) how they like to foster legends of a lawless frontier full of outlaws and bad men.

When he meets Hart, the cowboy actor turns out to be a western enthusiast, delighted to meet this mythic figure from the lawless frontier. He says to Bat,

Don’t underestimate the virtue of a legend. I like to think that my films are helping this nation find truths about itself, especially the value of a virtuous and brave man and what he can do in desperate circumstances, against all odds.

Bat, however, isn’t the kind of person to believe in anything so high-minded. Yes, he admits, life among the men and women who caroused night and day on the wild side of Dodge was dangerous. A man could get shot. It was especially precarious for a lawman.

But bravery and virtue were far from what was on his mind back then, patrolling the streets, the saloons, the gambling dens, and the theaters, with a current girlfriend waiting for him somewhere. Mostly, he remembers, it was just damn fun. Nobody in 1919, least of all Louella Parsons, who wants his story, could begin to understand that.

Finally in his journey, Bat comes to a kind of epiphany at the grave of Doc Holliday. There he realizes that the truth of men like himself and Holliday will never be known. “They can stuff us into dime novels forever,” Bat says, “but they’ll never know who we were. And I’m not going to tell them.”

Wrapping up. Wheeler’s Masterson is a wonderful creation. He tells his story in the first person and sounds much like you’d expect a New York newspaperman to talk. Equally engaging is his wife Emma, a former song-and-dance performer who hangs out now with the Ziegfeld girls after each night’s show.

Her relationship with Bat provides a subplot in the novel and a warmly satisfying development near the end that Wheeler admits is his own invention. Emma has a wry presence in her scenes with Bat that kept reminding me of Myrna Loy in The Thin Man. The post-Prohibition alcohol consumption in that film has its counterpart in this novel, as the clock ticks away the days and hours before saloons across the nation must shut down.

In the western states of Kansas and Colorado, where prohibition is already the law, the two of them have to sneak a supply of alcohol along with them. These occasions give Bat opportunity to inveigh against the idiocy of social reformers who would ban alcohol consumption for everyone.

This is an entertaining and thought-provoking novel about the very ideas that underlie the fascination with the American West. It never really answers the questions it poses except to say that prohibiting the consumption of legends has no more chance of success than prohibiting consumption of alcohol. And maybe the two aren’t all that different.

Masterson and a wide selection of Richard Wheeler’s other fiction are currently available at amazon.