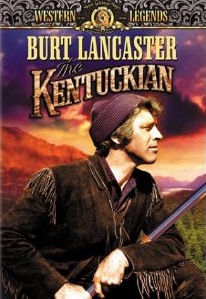 Not quite a western—the characters never leave Kentucky—this film made a splash in 1955. A Technicolor CinemaScope production, it was Burt Lancaster’s first movie as both director and star. The film introduced TV actor Walter Matthau, as a whip-wielding heavy, and the cast included John McIntire and John Carradine in supporting roles

Montana writer A.B. Guthrie, Jr., adapted the script from a novel, The Gabriel Horn by Felix Holt. Bernard Herrmann wrote the score, and Irving Gordon’s “The Kentuckian Song” was covered by several recording artists. It was a big hit for The Hilltoppers.

Plot. Lancaster and his young son (Donald MacDonald) are traveling on foot through the Kentucky woods with their dog, headed for Texas. They make it as far as the home of Lancaster's brother (John McIntire), where they meet a young woman (Dianne Foster), who is an indentured servant to Matthau, an innkeeper.

Lancaster pays off what Foster still owes to Matthau so she can join them. But he has to go to work in his brother’s tobacco business to raise the money for the fare on the riverboat that will take them west.

A schoolteacher (Diana Lynn) takes a shine to Lancaster, and with pressure from her and McIntire, it looks like Lancaster is going to stick around and forget about Texas. During a brutal fight between Lancaster and the trouble-making Matthau, Lynn realizes that Foster is also sweet on Lancaster. Realizing also that the boy has his heart set on Texas, Foster gamely steps aside.

Lancaster raises the money he needs at a roulette table, but travel plans are interrupted by a couple of enemies, intent on settling an old blood feud. In a suspenseful finish, there are gunfire and casualties before Foster and Lancaster are able to put a stop to them. Man, boy, and pretty young woman are then free to leave Kentucky.

Themes. The storyline is tried and true Hollywood Americana. It offers a sunny, family-friendly 1950s mythology about westward expansion and frontiersmen in buckskin. No big surprise that Holt’s novel had appeared as a Reader’s Digest condensed book in 1952.

The early 1950s also saw Walt Disney’s revival of the folk hero Davy Crockett. That TV series made Fess Parker and Buddy Ebsen famous, and coonskin caps were everywhere. In 1955, three versions of  “The Ballad of Davy Crockett” were in Billboard’s Top-10 charts.

It was a time when the HUAC had cleared the communists out of Hollywood, and an Army general was in the White House. The Cold War had nervous folks building bomb shelters. Another movie about a simple, pure-hearted, and self-reliant frontier hero surely helped many sleep better at night.

The story is not without its dark side. Matthau with his whip plays a mean-spirited man, though he’s not nearly so menacing as the two thugs who show up to kill Lancaster. As a portrayal of outright evil, they are thoroughly creepy. They seem capable of the most heartless and mindless cruelty. Real bogeymen.

Yet all ends happily. Even Matthau has to pay his dues. And Lancaster’s boy learns to blow the cow’s horn they’ve been carrying since scene one. After confronting his dad with giving up the dream of going to Texas, his resounding belt from the horn shows that he has become a man in his own right. It's another national myth, which connects the leaving of boyhood with departure westward.

Wrapping up. This is an enjoyable film with a lot of talent both in front of and behind the camera. Shot mostly on location, the wooded vales of Kentucky are warmly captured by Ernest Laszlo’s widescreen cinematography. For screenwriter A.B. Guthrie, Jr., the script was a notable follow-up to his adaptation for the film Shane (1953).

Lancaster directed only one other film, twenty years later, The Midnight Man (1974). MacDonald, who very ably plays his young son, worked onscreen briefly afterward, mostly on TV. Dianne Foster followed The Kentuckian with a busy TV career into the 1960s. Diana Lynn had previously appeared in numerous films and had frequent screen roles on TV in the 15 years following this one.

American painter Thomas Hart Benton painted a portrait of the characters of the film, which can be found online at the LA County Museum of Art website. The slightly daffy but sweet “Song” from The Kentuckian can be heard at youtube. Bernard Herrmann’s majestic score for the film is available at amazon on CD.

The film is currently available at amazon and netflix. For more of Tuesday’s Overlooked Movies, click on over to Todd Mason’s blog.