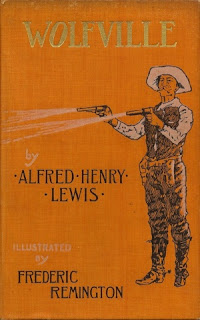 Alfred Henry Lewis (1855-1914), published a trio of books, Wolfville (1897), Wolfville Days (1902), and Wolfville Nights (1902). Each is a collection of sketches set in a fictional frontier settlement in the Arizona desert. Ominously called Wolfville, it was no doubt meant to emulate the very real town of Tombstone.

Cast of characters. The narrator of the sketches is a longtime resident of Wolfville, a man from Tennessee known as the Old Cattleman. The old man spends his time in the saloon or on the hotel verandah—usually drinking and smoking a corncob pipe—where the unnamed writer prods him into telling his yarns.

The yarns concern the dozen or so characters who live in or pass through Wolfville. Some of them cowboy for a living; one drives the stage; and one offers his services as the resident faro dealer at the Red Light saloon. One is the town’s doctor, and another is the town marshal. Mostly they seem to have a lot of time on their hands—time to sit around drinking and talking.

One of the women in town runs the OK Restauraw [sic], and another assists as lookout for the faro dealer, keeping an eye on the bets. The stories are similar to what you’d find in a TV sitcom. There’s this stable of characters, and each chapter finds them with some unexpected situation that throws them into a comical upset.

Style. What makes these stories genuinely entertaining is the way they are told. The Old Cattleman speaks in a mix of Southern and Westernisms, drawing heavily from the language of cowboys, card playing, and gambling. Multi-syllable words straight from the dictionary are mixed freely with slang, malapropisms, skewed syntax, and chopped logic.

Pronouns include you-alls, we-alls, and they-alls. “Which” functions as an all purpose relative pronoun and can be found at the beginnings of sentences even as the first word of a story. Language is often figurative and mixed with unexpected analogies. A man is described as so obstinate that he “wouldn’t move camp for a prairie fire.” An action with no useful effect is said to be like “throwin’ water on a drowned rat.”

Character. The test of character in Wolfville comes down to whether a man has grit. Of all the men in town, Cherokee Hall earns the most admiration, and partly for being beyond fathoming. As a gambler, he has a reputation for being always honest, and he calmly deals with even the most obstreperous players at the gaming tables.

He shows true heroism when he gallantly risks his life to save a coach full of passengers from an Indian attack. Surprised by a band of Apaches, Cherokee shows thoughtful concern for a woman passenger and her children. Asking the driver to stop for a moment, he leaps out with his guns and makes a stand.

When the coach arrives in Wolfville, its passengers unscathed, rescuers quickly come to his aid. They find him shot once but still alive, the bodies of Indians he’s killed lying around him. His actions demonstrate what is summed up as Doc Peets’ words to live by: “Life ain’t in holding a good hand but in playing a pore hand well.”

Women. Wolfville is a man’s world, and the men generally keep women at a safe distance. Using faro terminology, Cherokee advises the other men to always “copper a female,” betting on them to lose. The one exception is Faro Nell, who frequents the Red Light saloon and is regarded as one of the boys. She gets her name by being the lookout at the faro table for Cherokee, who calls her a “winner every trip.”


The problem with women, it is often said, is that they are irrational and thus unpredictable. As the presence of a single woman stirs up the eligible men in town, there is an immediate effort to marry her off.

When the tenderfoot bookkeeper for the stage company starts keeping company with a female newcomer in town, there’s concern that his attentions compromise her purity. A wedding is quickly arranged to make an honest woman of her, and as a form of encouragement, the men collect $700 as a dowry for the groom.

Cowboys. The men in the stories have among them about 2,000 cattle out on the open range. The cattle do not much occupy them, except at spring roundup, when the men leave town to spend a week or more branding calves. Only one of the stories involves cattle, and that is chiefly to give an account of a practical joker by the name of Jaybird Bob.

Out in the cow camp, Bob takes to playing pranks on a young tenderfoot from the East named Todd, who has a deadly fear of rattlesnakes. Wakened from sleep one night by Bob, who has dropped the end of a lariat on the boy’s face, Todd jumps up running and scatters the herd. It takes two days to round them up again.

To prevent the enraged Todd from killing Bob on the spot, another of the men confirms Bob’s snake story. Bob is not long among the living, however. Disguised as an Apache, he surprises Todd on his return to camp one evening. Startled, the boy rides off, turning in his saddle to put a bullet through Bob’s head before disappearing, never to be seen again.

East vs. West. There being no appropriate trees in town, the windmill in front of the OK Restauraw is used for hanging malefactors. All judicial proceedings are handled by the vigilance committee, known familiarly as the “Stranglers.”

There is fear in Wolfville that with the introduction of a newspaper and an opry house, the community is getting perilously close to having to elect a town judge. The coming of civilization, it is firmly believed, will disrupt the smooth execution of justice by the vigilance committee, which is swifter than the law and more responsive to public opinion.

Wrapping up. Lewis grew up in Ohio, practiced law in Cleveland and then fled to the West for a time in the 1880s. He worked as a cowboy on ranches in New Mexico and Colorado and as a freighter on an overland line from Las Vegas, New Mexico, to the Texas Panhandle and between there and Dodge City.

Returning to the Midwest, he took up residence in Kansas City. There he began writing his Wolfville stories for the newspapers. They were so popular he was soon earning $15 a week writing for the Kansas City Star, and he quit practicing law to devote the rest of his life to writing.

Wolfville is currently available at google books, Project Gutenberg, and Internet Archive, and for kindle and the nook. For more of Friday’s Forgotten Books, click on over to Patti Abbott’s blog.