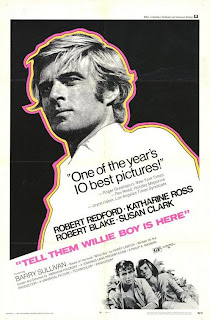 Revisionist, socially conscious westerns from the 1960s tend to show their age, and I was expecting to be disappointed by this one. But this film holds up pretty well, even though it starts out with a couple strikes against it.

While two of its central characters are Native Americans, the leads in the cast are all white actors, including Katharine Ross who plays a young Indian woman. You also expect the unfortunate events in Robert Blake’s later life to affect his presence on screen. Actually, neither poses much of a problem.

Plot. It is 1909; the setting is Riverside County in the deserts east of Los Angeles. Blake plays a Paiute Indian who kills the father of Ross’s character, when the man interrupts a lovers’ tryst and is intent on shooting Blake. Robert Redford is the local sheriff drawn unwillingly into the manhunt that follows. It is Indian business so far as he’s concerned, and he eventually leaves the posse of white men who are on Blake and Ross’s trail.

Though traveling on foot, the two fugitives manage to outpace and outwit their pursuers. When Blake shoots all of the posse’s horses and one of the men is gravely wounded, Redford rejoins the effort to find Blake.

He discovers the body of Ross, who lies shot to death with a pistol beside her, and it’s unclear whether her death was at the hand of Blake or a suicide. Working alone, Redford finally finds Blake and kills him in what appears to be self-defense. Soon he learns that Blake’s rifle was not loaded.

Themes. So the movie is something of a downer. Its message is about Indians caught between two worlds, their traditional one and that of the white man. Blake dresses like a cowhand, and could pass for one, but he’s an object of contempt because of his race. A product of an Indian school, Ross is torn between her love for Blake and her willingness to adapt to a white world.

Redford’s character is a man of uncertain identity himself. He’s coolly intelligent and is able to second-guess the man the posse is following, but he’s more involved in a stormy love affair he’s got going with Susan Clark. She’s a well-educated doctor who works on the reservation. Problem is, the only interest they have in common is sex. The rest of the time they fight. We don’t much like either of them.

The point of the film seems to be that the Indians are doomed, though the whites who dominate them are far from being more intelligent, humane, or deserving. They are simply better armed and outnumber them. One white character (Robert Lipton) has befriended Blake and pleads with the others not to treat him like a criminal. But his is only one small voice.

In a side-plot, President Taft makes a visit to Riverside, where a special chair is prepared for him to sit on at the Mission Inn. There’s a loony discussion among the men and Taft’s security detail about keeping him from being shot like President McKinley eight years before.

The film followed the Kennedy assassination by only six years. A contemporary audience would probably have understood the scene a little differently, but even 40-some years later, the men seem simply self-serving and callous. In fact, it’s a whirlwind visit, and we never get to meet Taft.

Performances. Robert Redford is his handsome self, with that intelligent, sly smile that occasionally reveals a few teeth, and he looks good on a horse. It’s pleasant to see his youthful face (he was only 33 at the time). Hard to tell how he was directed, but there is an opaqueness sometimes in his performance that makes him seem perplexed about the character he’s playing.

Blake had been in front of movie cameras since his boyhood, as one of the Little Rascals. He fully inhabits his character as Willie Boy and has a smoldering physicality in the early scenes that anticipates the rest of the film, where he is often on the run. Ross, to her credit, plays her role straight, and we forget her very different Etta Place in Butch Cassidy and the Sundance Kid, which was released in the same year as this one. 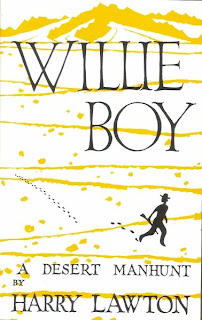 Wrapping up. The film was based on Harry Lawton’s book Willie Boy: A Desert Manhunt (1960). Lawton came across the story while working as a reporter for the Riverside, California Press-Enterprise, and spent three years doing research. He helped found the Malki Press, a publisher of books about Native Americans in California. His book was adapted to the screen by the film’s director, Abraham Polonsky.

The film benefits from being shot in the locale where the events the story is based on actually took place. The references are to actual locations: Whitewater, Banning, Twenty-Nine Palms, and the Morongo Reservation (site of a big, flashy casino now). Film was shot in some of these places, as well as Joshua Tree National Park.

Much of the strength of the film is its color, wide-screen cinematography, provided by Conrad Hall. His extensive Hollywood career included In Cold Blood (1967), Cool Hand Luke (1967), Butch Cassidy and the Sundance Kid (1969), and American Beauty (1999). Prolific composer for film and TV, Dave Grusin provides a contemporary soundtrack that is not “western” but underscores the action subtly and without intrusion.

Tell Them Willie Boy is Here is currently available at netflix and amazon. For more of Tuesday’s Overlooked Movies, click over to Todd Mason’s blog.