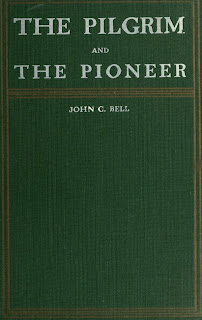 Written by a former U.S. Congressman, this autobiographical book is less a novel as it is a miscellany of anecdotes, travel writing, boosterism, musings, and political rhetoric. In the character of John Campbell, the storyline parallels the career of the author during the years 1874-1878, when Bell was a young lawyer in Colorado.

Plot. Campbell is the “pilgrim” of the story, a tenderfoot from Tennessee, fresh out of law school. Traveling to the gold fields of the Rocky Mountains, he meets and befriends an older man, Joshua Wickham, who was an early Colorado settler and is the “pioneer” of the title. He encourages Campbell to establish a law practice in a succession of mining camps that are growing into towns—Del Norte, Saguache, Lake City.

After a while, they take a long excursion together, first to arid southwestern Colorado, then northward to Salt Lake City, Butte, and Idaho’s Couer d’Alene. At that point, they part company. Wickham travels on to British Columbia, and Campbell returns to Colorado.

In the final three chapters, the narrative jumps ahead to the year 1900. Campbell, now middle aged, retraces the route of his journey to Idaho, and Wickham, an elderly man, returns to Colorado to find it greatly changed. The old frontier spirit he once cherished is now hard to find. The book ends with a family reunion for Wickham and his grown children.

Structure. At 531 pages, this is a long book to be summed up in just three paragraphs. The action doesn’t come together as a plot so much as a loosely connected series of incidents that illustrate larger philosophical and legal themes. A central thread running through the book is the pioneer Wickham’s philosophy of optimism. He believes that Nature moves at all times toward peace, harmony, and justice.

The unjust and dishonest, he says, are merely temporary impediments in the path of progress toward a more perfect world. For him the glass is always half full. Right will prevail. A skilled arbitrator, he keeps apparently irreconcilable disputes from escalating to litigation. He boasts that his efforts have made courts unnecessary.

Character. In a rough and ready way, the book is a bildungsroman. It tells the story of a young man, Campbell, who gains the courage to be a true public servant by becoming socially conscious and confronting injustice wherever it rears its hoary head.

He starts out as a timid fellow, a tenderfoot in the wild and woolly West. From humble beginnings, he has trusting expectations of a world that is in fact full of predators. The loose behavior of dancehall girls unnerves him, and he’s often the butt of practical jokes.

Nonetheless, he acquires a reputation among the more reputable among his fellow frontiersmen. Known to be unstinting in his efforts to serve his clients, he is soon elevated to the position of county attorney.

Whites and nonwhites. The subject of interracial marriage is a prominent theme in the book. Wickham, we learn, married an Indian chief’s daughter when he was a young man on the frontier. She bore him six daughters, all of whom shame him because they show no mixture of white blood. When his wife dies, he sees that they are married to white men, and he divides up his extensive property among them before leaving.

Over the years, Wickham laments that he ever fathered his daughters because he disadvantaged them by giving them mixed blood. Another man faults him for giving his children a “greasy, dumb, thoughtless, unsympathetic Indian squaw” for a mother. He hardly disagrees and comes to believe that it would take generations of infusions of white blood to lift his progeny out of their unfortunate genetic heritage.

Women. Respectability comes at a high price for the women. A young bride is forced by winter weather to overnight in a one-room inn with several men clustered in blankets around the fire. The next morning, they must promise that no one, not even her husband, will ever learn of their unconventional sleeping arrangements.

There’s one stellar appearance by Susan B. Anthony, who comes to town briefly in 1876. She appeals to the assembled miners to support the personal, property, and political rights of women. The men are won over by her well-reasoned argument that women should be granted equal rights in the Colorado Constitution.


Cowboys. The men who herd cattle in the mountain valleys are presented in the book as thoroughly honorable and decent men. As someone observes, they are “sons of nature,” not subject to the corrupting influences of city life, where alcohol ruins men.

The occasional bad-mannered cowboy is often a fugitive from justice, or he may tend to behave recklessly, but even then he is always a defender of women. As a class, cowboys are deemed “worthy and law-abiding citizens.”

East vs. West. Wickham often praises the West as superior to the East for its democratic spirit. Westerners are not class conscious as are Easterners. At a dance you will find the servant girl and the waitress treated with the same regard as the most respectable women.

Still, Wickham finds occasion to lament that western towns are often governed by the “dregs of society.” He rails against the ignorance of ordinary people, who allow themselves to be governed by inept and corrupt leaders. With his reliable optimism, however, he believes an informed electorate would select representatives who would actually serve the public interest.

Wrapping up. While fascinating for its content, the book is obviously written by an amateur novelist. The narration often shifts into long, soapbox-style declamatory passages, like a lawyer presenting a case to a jury. Though probably unintentional, the story bears a resemblance to Voltaire’s Candide, with Wickham as the optimistic Dr. Pangloss and Campbell as the impressionable Candide.

John Calhoun Bell (1851-1933) grew up on a farm in Tennessee and went to Colorado after finishing law school in 1874. He practiced law in mining camp settlements and occupied various public offices before serving five terms in the U.S. Congress, 1893-1903. He was the first representative from his district and ran on the Populist ticket. The Pilgrim and the Pioneer seems to be his only publication as a writer of fiction.

The Pilgrim and the Pioneer is currently available at google books, Internet Archive and for the nook. For more of Friday's Forgotten Books, click on over to Patti Abbott's blog.