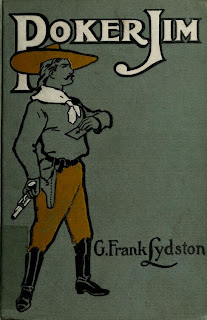 George Frank Lydston (1858-1923) studied medicine in New York and had a lucrative practice in Chicago, where he was on the faculty of the College of Physicians and Surgeons. He published numerous books and articles on sexual hygiene and sexually transmitted diseases and was a recognized criminal anthropologist. He was also the occasional author of travel writing and some fiction.

“Poker Jim.” Only four of the dozen stories collected in this volume are related to the West. The long title story, “Poker Jim, Gentleman” is set in 1860s California. The narrator, William Weymouth, is a young doctor with a medical degree from back East.

He settles at Jacksonville, a mining camp, on the Tuolomne River. Called to remove a bullet from a man shot in a duel, he meets the “Jim” of the title.  New in Jacksonville, Jim plies his trade as a gambler and brings his Spanish wife and child to live with him.

A reform movement seizes public opinion in the mining camps, and soon gamblers and prostitutes are forced to leave town. Instead of disappearing like the rest, Jim shows up at a saloon to have one last drink with the regulars before his departure. One man objects to his presence, starts a fight, and ends up knifed and quite dead, while Jim disappears into the night.

Terrible spring floods descend upon the town, and the residents who aren’t swept away take shelter in the one remaining structure, the hotel. Watching the river, they witness a house floating downstream. Inside it is a terror-stricken Chinese man. To everyone’s surprise, Jim appears on the opposite bank with a boat and attempts unsuccessfully to row out and rescue him.

The Chinese man survives, but Jim is drowned. Stunned by his bravery, men of the town gather to bury him. In Jim’s cabin, they find a letter addressed to the doctor, which reveals that Jim was his long lost brother.

Character. Jim is an interesting study for an author who, as a criminal anthropologist, believed that criminal behavior was hereditary and that criminals should be sterilized. Jim has come from a “good” family, but he’s been a “rascal” since boyhood. Not just a Huck Finn striking out for the territories, he gravitated to the underworld when he left home and keeps company with a criminal element.

On the run from the law and gambling for a living, he still manages to exhibit qualities of character one doesn’t associate with the criminal mind. He is a man of his word, a defender of the underdog, and dies finally attempting to save the life of a Chinese man. Though branded by a social reforming faction as a corrupter of public morals, he has the courage and noble bearing of a gentleman.

For further heroics, there is Johnny, the young soldier hero of “Johnny: A Story of the Philippines.” A teenage street tough from Chicago, he enlists with the Montana Volunteers and ships off to the Philippines, where he exhibits his true calling as a soldier. Fighting in the jungle, he survives in conditions that send many a lesser man back home. There is typhoid, malaria, and dysentery, not to mention the rapacious fiends, the Filipinos themselves.

Untouched by anything like patriotism, he is simply a fighting machine and consummate soldier. On a single-man mission to kill or capture a rebel leader, he takes along a lariat and a bowie knife, which he has learned how to use from his fellow troopers from Montana. He is a fine and fearless example of the “strenuous” hero advocated by TR himself.

Romance. Several of the stories concern unrequited love. In “Chiquita,” the English lover of a don’s daughter deserts her when her father contracts small pox. She remains at her father’s side until he dies and is infected as well. When the lover returns, he is repelled by her face now covered with scars. He lets her see herself in a mirror and then abandons her for good. She is devastated with grief and madness.

In “Leaves From a Suicide’s Diary,” a young man poisons himself with arsenic when he gets a dear-john letter from his sweetheart. In “A Dead Ideal: A Romance of the Dissecting Room,” an artist paints a beautiful nude woman he has seen in a dream. Then, changing his profession to medicine, he discovers to his dismay a cadaver that looks exactly like her.

Style. Lovers of Edgar Allen Poe will relish several of the stories that take a grim interest in death and decay. The action of “A Grim Memento” digresses into a description of death by strangulation when the narrator, a coroner’s office employee, observed a death-row prisoner being inexpertly hanged. In “Leaves From a Suicide’s Diary,” the narrator describes every kind of suicide victim he’s ever seen and seems determined to drain the blood from the reader’s horrified face.

There is some thrilling adventure writing in “Johnny: A Story of the Philippines,” as Johnny forges his way through the jungle to find the rebel leader. The final chapter of the book is a gruesome first-hand account of the Iroquois Theater fire in Chicago on December 30, 1903, in which over 600 died.

Wrapping up. Lydston was born and spent several years of his boyhood in California. As he explains in the preface to his travel book, Panama and the Sierras (1900), his father had come to California prospecting for gold. His mother had traveled there by wagon across country from Kentucky with her parents.

The story “Poker Jim, Gentleman” appeared earlier in somewhat different form in a collection of character sketches and short stories told by an older doctor to a student friend. Titled Over the Hookah: The Tales of a Talkative Doctor, the book was published in 1896.

Poker Jim, Gentleman is currently available at google books and Internet Archive and for the nook. For more of Friday's Forgotten Books, click over to Patti Abbott's blog.

Image credits: Illustrations from the novel by August Abelmann