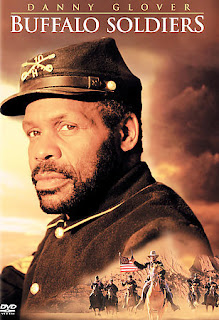 It’s one thing to over-simplify historical events for the sake of a “fact-based” movie, but this one crosses the line into total bunk. The portrayal of racial prejudice in the film is no doubt accurate. That’s not the problem. But the screenwriters have used the 10th Cavalry engagement with Apache chief Victorio at Rattlesnake Springs in 1880 to badly misrepresent the brave black men known as Buffalo Soldiers.

Plot. Danny Glover is First Sgt. Washington Wyatt of Company H, first seen patrolling the Mescalero Reservation in search of Victorio and his band of warriors. The Apache leader has been wreaking havoc in New Mexico, West Texas, and Mexico. Glover intercepts three Texas Rangers who have rounded up some Indians and are trying to coerce information from them about Victorio’s whereabouts. One by one, the Rangers have been hanging the children.

Glover puts a stop to this and orders half his men to continue the search while he and the rest return to the fort. There they find that a general (Tom Bower) has taken up residence as the commanding officer, with several companies of white troops. Col. Grierson (Bob Gunton), Glover’s CO, is scorned by Bower for his faith in the black troops and the responsibility he has given them.
Bower takes charge of the hunt for Victorio, replacing Grierson with another officer, Captain Calhoun. He heads H troop as they march from the fort, providing backup for the all-white C company. This effort ends in defeat. Calhoun and several of Glover’s men are killed in an ambush, but they manage to capture another Indian leader, Nana.

Back at the fort, Bower faults Glover for not following orders by failing to send reinforcements when requested by Company C. A mixed-blood African American-Seminole scout, John Horse (Carl Lumbly), defends Glover, pointing out that the black troops would never have arrived in time to make a difference.

In another effort, H Company strikes off into the deserts, now under the command of Grierson. The Buffalo Soldiers find Victorio at a place called Rattlesnake Springs, and when that encounter is over, the Apache chief retreats to Mexico, where a short time later, he was taken and killed by federales.


History vs. movie. That’s history. Here’s what happens in the movie. On the way to Rattlesnake Springs, Grierson is mortally wounded and turns command of the company over to Glover.

Surrounded by Glover’s men at the springs, Victorio (Harrison Lowe) turns out to be a reasonable man and wants to negotiate. He questions Glover’s allegiance to a race of people who once enslaved him. Glover remains firm. Either Victorio surrenders or he and his band—women and children among them—will be killed.

Guns drawn, Glover’s troops wait for the command to start shooting. But they soften, one of them saying, “We can’t do this.” And they let Victorio go, having decided that they will return to the fort and report, falsely, that the Apaches escaped capture once again. There they are greeted by July Fourth celebrations in progress (Rattlesnake Springs actually occurred on August 6). As they come riding in, they get scattered salutes from the whites who watch them arrive.

Racism. This made-for-TV film wants to show the racism that flourished among the armed forces on the American frontier. It surely does that—and no doubt fairly so. The black soldiers have to give up their barracks when the whites arrive, and there is ample disgust expressed by whites who are revolted by having to assume quarters recently occupied by blacks.

The black troops are required by regulation to follow mounted white troops no closer than 15 yards to the rear. Passing through a settlement, the black soldiers also have to dismount and walk their horses. This, we gather, is not a regulation but simply an arbitrary rule of the whites.

General Pike makes no secret of his contempt for blacks in the military. When Col. Grierson argues that 17 years have shown them to be as competent in uniform as whites, Pike insists that it’s been a “waste of time.”

My beef. A complaint I have about the film is simply that it compromises the integrity of the Buffalo Soldiers. The writers do no service for the record of blacks in the frontier military by having Glover and his men disobey orders and return from Rattlesnake Springs with a false report.

The filmmakers also undermine their own argument against racial inequality by falsifying history itself. Never mind that Victorio was not a Mescalero Indian as the film asserts or that Col. Grierson was some kind of bleeding-heart liberal. (He conducts a little highbrow musicale in the film with a black tenor singing Schubert.) And so what if he was.

Of greater importance is that Col. Grierson was not killed on the way to Rattlesnake Springs. He lived to effectively command his forces there. And an African-American was never handed command of the company for that confrontation.

Character. Danny Glover is fine as Wyatt. Twisted and pushed every which way by both well-meaning and intolerant men, he clings to what he knows, that as an Army man, he has his orders. Nothing else matters.

Even the mixed-race scout questions his loyalty to an Army that has no love for him or his men. “You have no pride,” he says. “What kind of nigger are you?” But the uniform Glover’s character wears, the stripes on his sleeve, and the duties entrusted to him are the only pride he knows, and at least until the end, they are enough.

The screenwriters, however, prevent him from preserving his stature as a soldier. Bumping off Grierson, they put Glover into a false dilemma at the end of the film. At Rattlesnake Springs, they contrive to make him choose between following the orders of black-hating whites and annihilating these nice, friendly Apaches. Thanks to this revisionist baloney, Glover's character loses a good deal of our respect.

Wrapping up. Shot in Benson and Mescal, Arizona, Buffalo Soldiers was a TNT production. It has excellent performances from a supporting cast of black actors. The film is currently available at netflix and amazon. For more of Tuesday’s Overlooked Movies, click on over to Todd Mason’s blog.