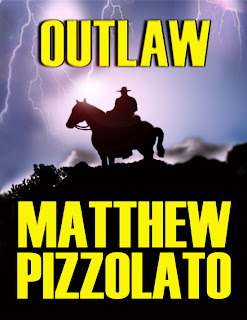 You read a Matt Pizzolato story for the enthusiasm in the storytelling. You know you are in the hands of a writer who loves the western. He immerses himself in the mythology so thoroughly, you follow along just to see where it’s taking him this time.

Outlaw has many elements of the traditional western, which you can trace back to Louis L’Amour and Zane Grey. But there’s the spirit of Max Brand, as well, whose imaginative world often had him veering way off-road into a magical terrain inspired by who knows what.

Plot. That happens in this short novel, for sure, as Pizzolato’s story starts with the comfortably predictable, its western conventions firmly in place. Though his central character is wanted for bank robbery in Texas, his arrival in a small Kansas town is sunny enough, with prospects of staying that way.

He is offered a job as deputy sheriff and meets a pretty young widow who stirs his better feelings. The villains quickly show themselves in the form of a nasty local rancher, who has a son spoiling for a fight with Quaid, just to prove he’s quicker on the draw.

But clouds begin to gather, and the story grows steadily darker. At first, it’s an idealized world, like a TV western, family-friendly. It starts out PG and then shifts into PG-13 country. Before long, we’re in R-rated territory as the sex gets more heated and the violence gets progressively more graphic. There are casualties, left, right and center, and Quaid takes quite a beating himself.

The women in the story deserve mention as true creations of western fantasy. There’s a good deal of romancing for Quaid, and he has his pick of the sweetly flirtatious widow, the steam-heated proprietress of the saloon, and a siren-like contract killer who appears at opportune moments. All find him desirable, and he doesn’t neglect their attentions.

Wrapping up. Pizzolato’s first-person narrative moves along at a good clip. He gets you interested from the start in Quaid’s intention to rob the town bank. However, up-to-date bank safe technology and an old fashioned armed guard provide enough obstacles to make you wonder how he’ll pull it off. Then as the plot twists accumulate, you begin to lose track of that thread until the surprise ending.

Outlaw is currently available in paperback at amazon and Barnes&Noble and for kindle.
Interview
Matt has consented to spend some time today at BITS to talk about writing and the writing of Outlaw, so I’m turning the rest of this page over to him.

Matt, talk about how this story first suggested itself and took shape.
The opening scene of Outlaw is the first thing I wrote with Wesley Quaid as the protagonist and I only had a vague idea of who he was, just a man who is discontent with his life and who wants to change it for the better. Yet as I got further into the story, I found that I needed to delve into his past to discover who he was. So I decided to put it aside temporarily and write a series of short stories that detailed his life before the events in Outlaw.

How different is the final version of the story from how you first conceived of it?
At the beginning, I intended to write a positive story of a bad man overcoming his past and bettering himself, but as Wesley Quaid grew into his dark, conflicted anti-hero role over the course of the short stories, so too did Outlaw evolve into a much darker story, but it is, I think, one that holds true to the anti-hero mythos.

Was there anything about this story that surprised you in the writing of it?
By the time I had established who Wesley was in my mind, I knew the story would take a dark turn when I went back to it, but I didn’t foresee the lengths that he would have to go to in order to fight against the villain of Outlaw, Dale Johnston.

How did you settle on the title?
Outlaw was a working title at first. However, as the story and the characters progressed, the more that title seemed to fit, not only because Quaid is a bank robber, but because he is an outlaw in that he doesn’t adhere to convention. He has his own code.

How did you settle on the cover?
Originally, I wanted to use a stock image for the cover but could never find exactly what I wanted. I had a couple of different images that were combined and put through various Photoshop effects, but I was never quite satisfied with the results.

The final cover I settled on was original artwork by my uncle, Michael T. Pizzolato, who also designed the covers for my story collection, The Wanted Man. I suggested that he design some art for it and the cover we used is what he came up with. When I saw it, I knew immediately that was the one.

How has the character of Wesley Quaid evolved since he first appeared in your stories?
In the first story he appeared in, Wesley Quaid was the leader of a gang who found himself disillusioned with the course his life had taken. When one of his own men tries to harm an innocent girl, Wesley kills him and rides away from his former life.

In several of the subsequent stories, he becomes a Robin Hood of sorts in that he defends people who are unable to stand up for themselves, sometimes with brutal results. At the beginning of Outlaw, Wesley is looking to start his life over, but the events from his past come back to haunt him.

You have said you were inspired by the anti-hero played by Clint Eastwood in Unforgiven. Are there any anti-heroes in fiction you’ve found interesting?
For me, the classic example of the anti-hero in fiction is Robin Hood, but I think the first anti-hero I was exposed to in my own reading was Wolf Larsen in Jack London’s The Sea Wolf. It’s still one of my favorite novels that I reread on occasion. I also found Roland Deschain in Stephen King’s The Dark Tower series to be fascinating, and I think the character of Batman is a great anti-hero.

How would you define the term “anti-hero” now that you’ve successfully created one?
I think an anti-hero is a character that is morally flawed but who, unlike the classic hero, doesn’t overcome his flaws. He doesn’t necessarily revel in them, but instead embraces and accepts them. He doesn’t live by a conventional moral code, he has his own code.


Of the several women in the story, which one was the most interesting for you as the writer?
The assassin, Sabrina, is the most interesting for me. Quite a few women during the time period were known killers such as Sally Skull, and there were even serial killers like Kate Bender and Ma Steffleback. It’s interesting writing that kind of character because it’s not one that I’ve come across very often in reading other stories of the Old West.

When a Wesley Quaid story is made into a film, who would you like to see play the role?
Christian Bale. I enjoyed his work in the remake of 3:10 to Yuma and his performance in The Dark Knight trilogy was excellent.

Do you have plans for more Wesley Quaid stories?
I’ve already started the next story that takes place after the events in Outlaw and have several ideas for more bouncing around in my head. He has become my favorite character to write.

Does Quaid himself give you any ideas for further adventures?
He does because of the unique perspective that writing an anti-hero offers. I think it allows a writer to explore the gray area of morality instead of the moral absolutes of black and white, which opens new areas of storytelling.

What has been the most interesting reaction from the readers of your stories?
I’ve been pleasantly surprised that people seem to like my assassin character, Sabrina. I’ve been told several times about how fascinating they have found her and that they want to know more of her back story, so I’ve got a few solo stories planned featuring her. 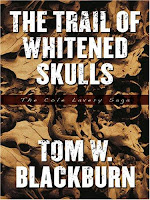 Are there any past writers of the American West that you feel are undeservedly forgotten today?
I recently discovered The Trail of Whitened Skulls by Tom W. Blackburn, which is a collection of some of his short stories, and downloaded it on my Kindle. When I finished reading it, I looked him up on Google and was blown away by what he’d contributed to the Western genre, both in fiction and in film. I don’t know if he’s been forgotten, but I’d never heard of him before. I’m definitely searching for more of his work.

What can readers expect from you next?
I’m working on another collection of short stories that will feature Wesley Quaid and Sabrina, as well as my classic hero, Jud Nelson. The working title for it right now is Two of a Kind and I’m planning on releasing it after the first of the year. I’m also expanding one of my short stories into a novel length work that I hope to have finished late next year.

Anything we didn’t cover you’d like to comment on?
I’m proud to be writing in the Western genre. There’s so much history there and so many stories that have yet to be told. The potential of the Western is endless.

Thanks, Matt. Every success.