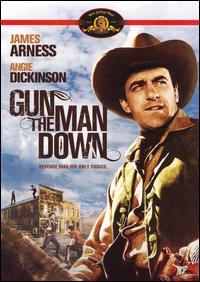 Like Good Day for a Hanging, the title of this western promises a good deal more hard-boiled roughness than it delivers. As interested in character as it is in action, this film brings together the talents of a screenwriter, two actors, and a director at the beginning of long successful careers.

In 1956, James Arness was about to begin his 20-year tenure as marshal Matt Dillon in TV’s Gunsmoke. Angie Dickinson had her first feature role in the film. And the director was Andrew McLaglen, who would go on to direct John Wayne westerns, TV’s Have Gun, Will Travel, and 96 episodes of Gunsmoke.

The script was from the talented hand of Burt Kennedy, who would become a director himself after a series of classic westerns working with Randolph Scott and Budd Boetticher. A Hollywood veteran, William Clothier, also deserves a nod for the film’s handsome black and white cinematography.

Plot. A gang of bank robbers makes off with $40,000 in a holdup. When an exchange of gunfire leaves Arness wounded, he is left behind as the posse closes in on them. Dickinson has been Arness’ girlfriend, but she is persuaded to ride off with the remaining gang members (Robert Wilke and Don Macgowan).

Captured, Arness refuses to name his accomplices. He has his own plans for settling scores and doesn’t want the long arm of the law to find them first. A year passes and he is free again, having served his sentence. With the help of a lone gunman (Michael Emmet), he traces the gang to a sleepy town where Wilke, Dickinson, and Macgowan are running a saloon.

Observed by the local sheriff (Emile Meyer) and his deputy (Harry Carey, Jr.), Arness sends Wilke into a panic. He hires Emmet to kill Arness, but the gunman isn’t fast enough to outdraw Arness. The gang decides to get out of town, with Arness in pursuit.

The sheriff and his deputy follow along behind, letting revenge take its course and planning to arrest whoever comes out alive. Events arrange themselves in such a way that two gang members are gunned down by one of their own. Arness then turns over the remaining one to the sheriff.

“You did right,” the sheriff says.

“Finally,” Arness answers and rides away, a free man.

Character. After all those years of Marshal Dillon, you expect Arness to look awkward playing an outlaw. He doesn’t. And not for any great acting skill on his part. The character he plays in this film could very well have been the same man who took the job in Dodge. There was always a shadowy side of Dillon anyway. You sensed it was there without seeing any real evidence of it.

The moral center of the film is the sheriff. He does his job with an understanding of human nature and a regard for keeping the peace that Dillon later brought to his job. His deputy has a similar innocence about the world that Dennis Weaver found in his portrayal of Chester. The goings-on at the saloon, Harry Carey, Jr. says, would make a man blush all over.


Storytelling. Reportedly shot in nine days, the film is a marvel of storytelling economy. Parts of it are told without dialogue. At one point, seven minutes pass without a word as the camera follows and crosscuts among several of the characters at the center of the story. Emmet is stalking Arness, searching the streets and buildings for him, while Dickinson and the two other members of the gang wait in the saloon for the sound of gunshots.

Tension builds, as we are shown nothing of Arness. We don’t know where he is or whether he even knows he’s being stalked. Finally, in one of many nicely shot scenes, Emmet enters a barn and stands just inside the large doorway. Our view of him is from a high angle, looking down at him and the sunlit ground behind him.

Then a shadow appears behind Emmet, growing longer as someone walks into the frame made by the door. It’s Arness, who speaks. “Hello, Billy,” he says, and dialogue continues again.


Cinematography. The black and white cinematography often heightens the drama and the mood of scenes. The sheriff, when we first meet him, complains about the heat, and the camera makes us aware of the bright sunlight, throwing any shade into deep shadow. Many scenes are thus rendered in sharp contrasts between light and dark. Interiors are often shadowy as well, the sheriff’s office darkened even at mid-day. Meanwhile, tight close-ups are used to amplify the tension.

Many scenes are shot to capture setting and movement in deep focus. Arness first appears in two scenes in the far distance, while other characters are in the foreground. Meeting up with Emmet in his search for the gang, he is silhouetted against the sky in an arch formed by trees. Then he rides toward the camera, where Emmet is sitting at a campfire.

When Arness arrives at the town, the view is from the street, where the sheriff and the deputy have been talking in the heat of the day. Beyond them and above, Arness brings his horse to a stop on a ridgeline, to look down on them. A reverse angle then puts us on the ridge looking past Arness into the main street of town, bright in the sunlight.

Playing with conventions. The villains of the film are not all that villainous. Their fault is that they have a weakness for money. They are not mean, just unable to resist the appeal of it. So Emmet, who declares himself a friend of Arness, accepts $5,000 to kill him. It’s an offer he can’t refuse.

Dickinson claims to have led a life of wrongdoing, though you want to ask, “Compared to what?” She looks wholesome as the girl next door, a life of sin having left not a mark on her. As she asks to be forgiven for abandoning the wounded Arness and riding off with Wilke, you expect him to relent. But he doesn’t forget a betrayal so easily.

Instead of ending with a big kiss, as westerns often did, this film begins with one. Lovers with plans to forsake a life of crime and settle down on a ranch after the robbery, Arness and Dickinson are in each other’s arms and breathing heavy in the opening scene. It’s a surprising twist that he rides off alone at the end.

Wrapping up. This is a gem of a western, thanks to Burt Kennedy and the creative talents of its cast and director. At 76 minutes, it is hardly longer than the standard B-movie. The lean pieces of its storyline are nicely crafted together. The action is limited to a chase scene, a fierce fistfight, a single under-played gun duel, and a manhunt that puts one man in pursuit of another over a jumble of sun-drenched boulders.

The lush orchestral soundtrack features music often associated with more dramatic films. Outdoor scenes have the nice touch of birdsong to give them ambient depth. Gun the Man Down is currently available at netflix and at amazon and Barnes&Noble. For more of Tuesday’s Overlooked Movies, click over to Todd Mason’s blog.

Coming up: Pauline Wilson Worth, Death Valley Slim and Other Stories (1909)