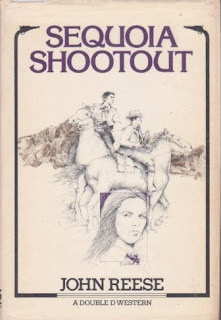 This novel from western writer John Reese is a mix of unexpected elements. You know you are in the Old West from the first paragraph, and you know what’s at stake by the end of the first chapter. The central character, Jefferson Hewitt, is on the trail of a vicious scoundrel known as Durango Slim.

What transpires between their first encounter, a near fatal ambush, and the final shootout between them in the Sequoias of California is as unpredictable as the deal of a poker hand. Maybe it’s the revisionist 1970s, when the novel was written, but Reese seems to enjoy playing with the conventions of the genre so that you’re always being set up for a surprise.

Plot. Hewitt is after Durango Slim because the man is a white slaver. He has lured at least three very young women—girls—into prostitution. Two of them wind up dead. Hewitt rescues a third one in time to put her on an eastbound train out of harm’s way.

The man is especially dangerous because he is such a crack shot with a rifle. He’s an associate of a California lumberman, Creed (sounds like “greed”), who is building a commercial empire on the proceeds of human trafficking. He’s been selling women into the lucrative Asian market as sex workers.

Playing with expectations. As one example of Reese’s sleight-of-hand style of storytelling, there’s the identity of Hewitt himself. For several chapters, he seems a conventional hero of western fiction, a lone man driven by his own code of honor to bring justice where it’s needed.

He is down to his last few dollars, poorly dressed and outfitted. He seems at a decided disadvantage in his pursuit of a cunning and heartless gunman. He hires on a man, O’Hara, who will help him track Durango Slim—if he can just keep sober. Following a trail into the Sierras, the two are an unlikely team who promise to eventually get their man after 150 pages of overcoming the odds.

Then it turns out the odds aren’t what you think they are. Hewitt reveals himself to O’Hara as a partner in an indemnity and bonding company. His partner, in Cheyenne, does all the office work and Hewitt does the fieldwork.

Money is not a problem. If he dresses like an out of work cowpuncher, it’s because he likes it that way. It’s one of many personas he likes to play. Not only that, we learn that Hewitt is just one of many aliases he uses.

Wrapping up. This Double D western is one of dozens from Reese (1910-1981), who wrote most of his novels in the 1970s when he was in his sixties. Sequoia Shootout is the sixth of ten novels featuring his character, Jefferson Hewitt. Earlier, starting in the 1930s, he published scores of stories in both pulp and slick magazines. He grew up in a rural community in the Nebraska Sandhills.

His novel Halter-Broke (1977) was reviewed here recently. His Saturday Evening Post story, “Frontier Frenzy” (1958), was the basis for a Fred MacMurray western, Good Day for a Hanging (1959), also reviewed here.

Sequoia Shootout is currently available at amazon, Barnes&Noble, and AbeBooks.