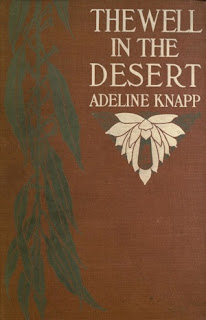 The well and the desert in the title of this novel may be more symbolic than literal. An early environmentalist, Knapp argues for the salutary and redemptive properties of a Thoreau-like retreat into the wilderness. There’s also something of Robinson Crusoe in the main character’s use of survival skills to create a sustainable life out of what nature provides.

Plot. A terminally ill man, Gabriel Gard, appears at a mining camp in Arizona. He’s a fugitive from the law, having escaped from prison where he’s served three years of a life sentence for killing another man. A lousy lawyer, Westcott, whose self-interest got him wrongly convicted in the first place, turns him over to the law again.

When a flashflood takes the life of the deputy returning Gard to prison, he strikes off into the desert, eventually fetching up at an elevation in the mountains, where he builds a shelter near a spring and lives undiscovered for two years. During that time, his health improves, he acquires a more spiritual outlook, and he happens upon chunks of ore rich with gold.

His seclusion comes to an end when he rescues a man who has stumbled into quicksand. Thad Broome, a cowpuncher and hopeful prospector, turns out to be irksome company and discovers that Gard has found gold. Taking Broome back to civilization, he blindfolds the man to keep him from returning to lay claim to the mine himself.

Events then move swiftly as Gard takes it upon himself to see that matters are set right for a widow, Kate Hallard. Among documents taken from the drowned deputy, Gard has found the deed to the widow’s ranch, now claimed by the crooked lawyer Westcott.

At a nearby ranch, Helen Anderson, the young woman destined to be the love interest in the novel, returns from four years of higher education back East. She and Gard meet when she finds him injured in a fall from his horse. Recovering from his injury at her father’s ranch, Gard befriends the girl, but learns he has a rival in the self-same lawyer, Westcott.

There follow many neatly crafted plot complications as Gard and Westcott attempt to outwit and outmaneuver each other to gain control of (a) the widow’s ranch, (b) the gold mine, and (c) the affections of the lovely and charming Helen Anderson. By story’s end, Gard has been pardoned, Westcott and Broome have been out-foxed, the widow has her ranch, and Gard has married Helen.

Character. Knapp gives us a man who is good as dead in the opening chapter, but whose survival instincts are sharpened by the physical trials he must endure. At first he is kept alive by the desire to avenge the lawyer Westcott’s betrayal of his trust. But as he takes lessons from the desert, his desire for vengeance wanes.

His spirit lifted by transcendent experiences in the mountains, he cleans up his act. The desert retreat and his return to health have shown him to be a survivor. His strength restored, he realizes that the wilderness has been the making of him.

Back in civilization, still believing himself to be a fugitive, he risks arrest and loss of his freedom by working to restore rightful ownership of her ranch to Kate Hallard. When Helen says his gold mine will make him a rich man, he tells her that advantages like wealth don’t make a better man unless he tries to make a better man of himself.

In a desert-inspired, philosophical mood, he tells Kate Hallard that the scheme of the world can’t be known. Only some Other has the whole picture and manages everything. “There ain’t anything in it for us to be afraid of but just ourselves,” he says.

Romance. Gard is attracted to Helen but believes himself unworthy of her love. Once she knows his whole story, he thinks, she’ll be repelled by him. Knapp doesn’t dwell on Helen’s own view of him, until very late in the novel when we’re told that, with her “woman’s cognizance,” she appreciates “the strength and poise of his spare, supple frame; the clean wholesomeness of his rugged good looks.”

Finally, his good name restored, he holds her in his arms, and in a sweetly romantic moment, she cannot look him in the face without blushing. After their marriage, they honeymoon at Gard’s retreat in the mountains, bringing to mind the Edenic glade where The Virginian takes his new bride at the end of that novel.

Actually, among the characters, friendship plays a stronger role than romance. Kate and Helen become acquainted, and after a day spent together, Kate says, “If the friendship of a woman like me is ever any use to you, it’s yours while there’s a drop o’ blood in my heart.” Meanwhile, there’s some uncomplicated male bonding between Gard and the ranch foreman, Sandy Larch.

Whites and nonwhites. Knapp gives larger roles to Chinese characters in her novel than is typical of early westerns. They fill the usual functions of ranch cook and eating-house staff, talk in pidgin English (“Me velly good boy”), and get called “yaller heathen” and “Chinks.”

But despite all that, Knapp makes them important to the plot. The ranch cook, Wing Chang, gets numerous mentions in the book and overhears an important conversation between two villains that he then reports to the ranch foreman. Gard also entrusts Kate Hallard’s Chinese cook with documents securing title to her ranch.

Wrapping up. Born in Buffalo, New York, Adeline Knapp (1860-1909) was a journalist, writer, social activist, and environmentalist. From 1877, she lived and worked in San Francisco. In later years, she took an active interest in the fate of Hawaii’s royal family and ending both child labor and the use of birds’ plumes in women’s hats.

After the Spanish-American War, she traveled to the Philippines to serve there as a schoolteacher. Not altogether progressive in her political views, she opposed Chinese immigration and was a vocal opponent of women’s suffrage.

Like Gabriel Gard in her novel, she retreated for a time to the foothills above San Francisco Bay, building a shelter there, to live in seclusion. At the end of her life, she turned to writing fiction. A handful of short stories saw publication, chiefly in McClure’s, plus this single novel.

The Well in the Desert is currently available at google books, Internet Archive, and Open Library, and for the nook. For more of Friday’s Forgotten books, click over to Todd Mason’s blog.