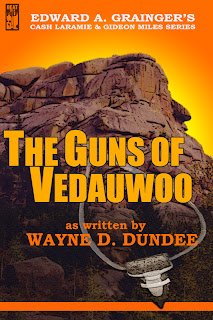 Here’s another Cash Laramie adventure from the pen of Wayne D. Dundee. I think of Dundee as the Max Brand of current western writers. He writes faster than I can read. He also has Brand’s sure grasp of how to make the western novel pop with excitement and sharply drawn characters. His villains are chillingly psychopathic.

For readers who like their western stories set in an Old West that is both mythic and historical, this novel fills the bill in that regard, too. It concerns an attempt to deliver rifles to Ghost Dance inspired Sioux, ready to wipe the North American continent clean of every alien intruder who has arrived since the Mayflower.

Plot. Cash is sent out from U.S. Marshal headquarters in Cheyenne to intercept a prison escapee by the name of Vilo Creed (an appropriate corruption of “vile” and “greed”). Creed is headed for Vedauwoo, an outcropping of rocky terrain on the Wyoming plateau. This area, familiar to Cash from his upbringing among Indians, is the apparent hiding place of a large shipment of Winchester rifles gone missing in the 1870s.

Vedauwoo, despite its isolated location, turns out to be a little crowded when Cash gets there. A gang of train robbers is hiding out nearby, and a small group of dudes from Denver have traveled out here so one of them can show off his rock-climbing skills.

Cash, when he arrives, sets up camp, unaware of the presence of the others. Then he gets a visit from an aging medicine man, who’s had visions of disturbing events about to transpire at Vedauwoo. The villain Creed, meanwhile, is on his way, wreaking his own brand of havoc among peaceful citizens as he goes.

When all is said and done, the ranks of characters have been thinned considerably by fatalities, none from natural causes. One character, in fact, is never more than comatose from the start, following mortal injuries sustained during a train robbery. Cash himself takes a beating, surviving gunshot wounds by sheer will power.

Wrapping up. Fans will not be disappointed by this new addition to the Cash Laramie-Gideon Miles series. Dundee makes the novel a breathless page-turner. He deftly manages a large cast of characters, keeping them all sharply defined, and shifting point of view among them at a pace that never flags. His particular brand of graphic violence has its grim role to play as well.

Read the fine print, and you’ll discover that the handsome cover photo has been provided by western and crime fiction writer Richard Prosch. Dundee himself provides helpful historical notes at the end of the story. The Guns of Vedauwoo is currently available as an ebook for the kindle.

Interview
David Cranmer, who as Edward Grainger created and edits the Cash Laramie and Gideon Miles series, has agreed to stop by BITS today for a chin wag. We’ve caught him in a wry mood, and thus I’m doubly happy to turn over the rest of this page to him.

As editor of the Cash and Miles series, talk about how this story suggested itself and took shape.
Wayne had told me he was “gathering the wool” for a story, and, when he’d finished, he presented to me the general direction he was heading. I’d let him know if something wasn’t working and might offer a few minor suggestions, but, honestly, Wayne gets this character of the outlaw marshal to a T and can just run with it on his own.

How different is the final version of the story from how it was first proposed?
A character that survives the ending, Wayne felt, was presented a bit harshly. He re-wrote it to present the character in a more sympathetic light. I appreciate Wayne’s detailed approach.

Was there anything about this story that surprised you in the writing of it?
Rock climbing in a Western! Good lord, that was a stroke of genius. He admits in the author’s note that he took a bit of dramatic license, but it was well worth it.

Do we see a side of Cash that we’ve never seen before?
Yes, in Cash’s dealing with Twisted Root, the medicine man of the tribe when Cash was a child, in the final scene high up in the Vedauwoo rocks. I like the fact that Wayne shows us Cash’s respect for his Native American roots.

How did you settle on the title for the novel?
That was all Wayne. Kinda like The Guns of Navarone only a little harder to say as a Twitter pal of mine informed me.

How did you settle on the cover?
I asked Richard Prosch if he had a photo of the Vedauwoo rocks because it’s hard to find stock images of the area. Then my wife Denise did the rest. We felt our BEAT to a PULP covers were starting to blend with all the darkness, so this was an attempt to lighten them up a bit. Does it work? Too much orange? You tell me.

How has the character of Cash Laramie evolved since he first appeared in your fiction?
We went from noir to more hardboiled. I originally saw Cash Laramie as being a Raymond Chandler type in the Old West. Now he has more in common with Mike Hammer.

When a Cash Laramie story is made into a film, who would you like to see play the role?
If they’re not too old by then, I see Daniel Craig or Gerard Butler. The ladies have to like him but you gotta believe he will kill at a moment’s notice.

Do you have any plans for where you’d like to see the series go?
I’m working on Adventures III, which will see the character age considerably. Is anyone ready for a 70-year-old Cash Laramie? And Wayne has already said he is interested in writing a third novel. Heath Lowrance has the next Gideon Miles novella nearly completed.

Does Cash himself have any ideas for further adventures?
He never shuts up with stories. He’s afraid I won’t get them all out. But I see myself scaling back after 2013. Maybe a novel a year at the most. I’m slowly outlining something I’ve been calling The Memoirs of Gideon Miles.

What has been the most interesting reaction from your readers of these stories?
A few readers have been surprised by Cash’s partner, Gideon Miles. A black U.S. Marshal. “Are you kidding me,” they say. “He wouldn’t talk that way” or “There weren’t black lawmen.” I usually point to Bass Reeves or Nat Love and that usually shuts them up. Overall most readers have accepted this series to heart and want me to keep ’em coming.

What are you reading now?
As far from a Western as you can get: Ham on Rye by Charles Bukowski.

Are there any writers of the American West, living or dead, that you feel are undeservedly forgotten today?
Luke Short, Ernest Haycox, and Matthew P. Mayo. I think one of those guys is still alive. I forget which.

What can readers expect from you next?
I’m working (editing) BEAT to a PULP: Hardboiled 2 that will feature thirteen crime winners, a third Hawthorne novella by Heath Lowrance called “The Spider Tribe,” and a science fiction tale featuring Simon Rip that Chad Eagleton penned.
Anything we didn’t cover you’d like to comment on?
Register to vote and remember to never insult seven men with a six-shooter.