Pauline Wilson Worth, Death Valley Slim and Other Stories (1909)

Pauline Wilson Worth (b. 1887) is one of those walk-ons in the early days of western fiction, who appears briefly and then disappears without a trace. This book is an artfully illustrated collection of six stories, first published in magazines. Most are mining camp stories, and each has a sentimental twist. Here are four samples:

He was six foot two in his stockin’ feet, he had one game eye thet stared at ye while t’other one looked around, and he had a long, droopin’ mustache. Awful awkward, Death Valley Slim was; seemed like his big hands and feet was allus in his way.

Over a period of time, he walked across the continent to get to the West Coast and got his name working in the mica mines of Death Valley in California. With “big, honest eyes” and a heart “true as steel,” he makes a modest living by playing guitar and singing songs in saloons.

He’s also a wealthy man. With $20,000 from striking it rich in the Colorado gold fields, he is able to smooth the way for a wedding between a girl he loves and a silver mine bookkeeper. On her wedding night, he entertains at the saloon and his songs are so sweet there’s not a dry eye in the place. As this idealized portrayal of camp life draws to a close, the narrator observes that “underneath all this roughness” one can find true hearts and friendship.

“The Race for the Sun Beam.” The get-rich-quick mania during the gold rush years gets a curious maternal interpretation in the opening pages of this story. Gold, the narrator says, is a “wonderful gift of Mother Earth.” For hard-working prospectors, it is the “reward of years of privation and hardships and the realization of long deferred hopes.”

The story itself is a lesson in how sudden wealth can pave the way for friendship. Two prospectors, Price Howard and Hank Bashford, start out as partners but have come to distrust each other. Howard is an upright fellow, but the short and shifty-eyed Bashford has once even pulled a gun on Howard. 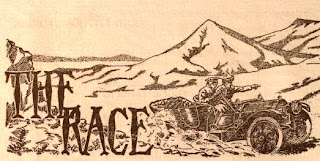 When they finally hit pay dirt, each agrees to sell his share of the claim to whichever of them is able to put up $10,000. Howard walks 30 miles to town and easily borrows the money, but then loses it all gambling. Borrowing another $10,000, he races back to the claim with a friend who has an automobile. There he finds Bashord waiting, but empty-handed, unable to raise the money.

Howard then takes pity on him, and before long they have made up their differences, agreeing to joint ownership of the mine. All ends happily, proving that in the West, “it ain’t what a man once was—it’s what he is now.”


“Fourth of July Consolidated.” This one is a sweet love story, involving the love of a man for a woman, and of two men’s affection for each other. One of the men, Shorty Rogers, has told his partner, Barr Clander, that he won’t court the local schoolteacher until there’s snow on the Fourth of July.

Such a day comes, and Barr reminds Shorty of his declared intention. So Shorty cleans himself up and heads for town to make good on his word. When the day passes and Shorty does not return, Barr begins to worry.

Then as dusk falls, he hears a commotion as the whole town arrives at their cabin. The schoolteacher has agreed to a wedding, and since it was too late to fetch Barr for the nuptials, they have brought the wedding to him. And so the bonds of true friendship are celebrated again. 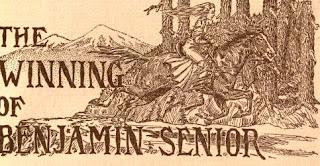 “The Winning of Benjamin Senior.” This story merges the themes of reconciliation and overcoming parental objection to a proposed marriage. A rancher’s son, Ben Forbes, has fallen in love with a city girl while away at college. His father wants him to marry a country girl, who can ride a horse and milk a cow.

Invited to spend the summer at the ranch, she proves she has grit when a range fire breaks out. With all hands out fighting it, the flames come within a half-mile of the ranch. The girl bravely takes a bucket of drinking water to them and then rides to town for more help. In the end, a prize haystack is saved, and the old man accepts her as a prospective daughter-in-law.

Wrapping up. Over and again, Worth’s stories portray a kinder, gentler West, where differences exist to be resolved by a generosity of western spirit. Friendship is valued above all else, and sweethearts overcome the obstacles in the way of romance. Villainy is nowhere to be found, and all people need is a little encouragement to get along.

“The Race for the Sun Beam” was first published in Charles Lummis’ Los Angeles-based Out West Magazine, and three of the others first saw print in Western World. Death Valley Slim and Other Stories is currently available online at google books and Open Library and for kindle and the nook. For more of Friday’s Forgotten Books, head on over to Patti Abbott’s blog.

Image credits: Illustrations from the book by C. A. Friedmann