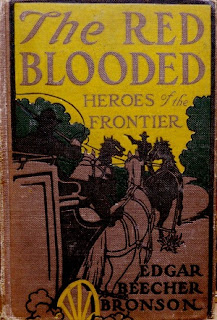 Bronson’s memoir Reminiscences of a Ranchman (1908) was reviewed here a while ago. The Red-Blooded is a collection of further memoirs and some fiction published two years later, half of it set in the frontier West. Here are a few samples.

“Loving’s Bend.” Bronson begins the book with an account of Texas cattleman Joe Loving. Telling a story that was told again by Larry McMurtry in Lonesome Dove, Bronson describes Loving’s fatal encounter with a band of Comanches on the Pecos in 1868. Riding some 60 miles ahead of his herd, in the company of a cowboy, Jim Scott, Loving was felled by a rifle shot that shattered his leg.

As Bronson tells it, the two men defended themselves by taking cover under a steep bank along the river, while the Comanches laid siege. Under cover of darkness, Scott escaped by floating down river a quarter of a mile, then walked without boots for a day and another night before being found barely alive by one of Loving’s cowboys.

Fellow trail boss Charles Goodnight sent a rescue and found Loving about to lose his leg from gangrene. A surgeon was brought from Las Vegas, and Loving’s leg was amputated, but like Gus McCrae in Lonesome Dove, he did not survive.

“Triggerfingeritis.” This chapter is a tribute to the lawmen who fearlessly hunted down, eliminated, or drove away the most bloodthirsty of the bad elements on the frontier of the 1870s-1880s. Praising not just U.S. marshals, and sheriffs and their deputies, he includes stage and railway express guards, vigilance committees, and range detectives.

Among those he singles out for recognition are men with names like Boone May, Captain Jim Smith, Billy Lykins, Bill Stoudenmayer, Hal Gosling, Johnny Manning, Col. Albert J. Fountain, and Pat Garrett. With their services, Bronson argues, there was little need for judges and juries, and for each lawman mentioned he provides a lengthy character sketch.

Bronson counts Pat Garrett among his personal friends and says that with the exception of Col. Fountain, Garrett had “stronger intellectuality and broader sympathies than any of his kind I ever met.” Easy going in his private life, Garrett was also “exacting and painstaking” as a peace officer. Bronson notes that he was also an avowed atheist and suspects foul play in his death, which had occurred only recently, in 1908.

“The Evolution of a Train Robber.” In this chapter, Bronson gives an account of a typical cowboy, Kit Joy, who supplies himself with the needed funds for a trip to San Francisco by turning to crime. Enlisting three accomplices, he holds up a train west of Deming. The engineer is shot during the robbery, and the four men soon have Sheriff Harvey Whitehill on their trail.

Tracing a piece of newspaper found near the scene to a merchant in Silver City, he is able to identify one of the robbers, whom he tricks into revealing the identities of the others. Jailed, the four men break out, with two other prisoners, and in the manhunt that follows, all but Joy are either shot or arrested.

When one of the posse pursuing them is found dead, the two living captives are hanged on the spot. Joy remains at large for weeks, until hungry and desperate he is shot in the leg by a rancher. After serving 14 years in a Santa Fe prison, Joy was released on good behavior and continued his life as a law-abiding citizen. At heart, Bronson says, he was a better good man than a bad one.

“Circus Day at Mancos.” As an example of the exaggerated regard of cowboys for women, Bronson tells the story (and this is fiction) of cowboy Mat Barlow. The tenderfoot cowboy has a sweetheart, Netty Nevins. Over the course of eight years, the two of them have an active correspondence as he works for the Cross Cañon outfit accumulating a little nest egg for the two of them.

When he finally has the money, the cowboys travel with him 170 miles to Mancos, in southwest Colorado, where he plans to wed Netty. When they get there, they find that a circus has also arrived. But there’s trouble when Mat is cheated out of $20 while buying tickets for his companions. When the ticket seller refuses to correct his “error,” the cowboys pull down the tent and set the circus animals free.

This triggers a melee, and a pretty girl from the circus fires a pistol at Mat before realizing who he is and revealing herself as his sweetheart, Netty. In a sentimental ending, Mat dies in her arms, never learning that she has been married to the ticket seller, now dead, too. The heart-felt letters that the two lovers exchanged have kept her from despairing at the unfortunate circumstances of her life with the circus.

The cowboys, glad to know that their Mat never learned the truth about her, chip in to set her up with a little ranch, where she remains true to Mat’s memory. Twenty-two years later, two of the cowboys find her still tending his grave.

Wrapping up. The rest of Bronson’s stories in this collection range over topics that include the life and death of the legendary Clay Allison, a perilous trip into Mexico, aeronautics (ballooning), hunting in Quebec, bullfighting, and his travels to and in Africa.

Bronson’s contributions to the literature of the West are chiefly nonfiction, in the form of memoir and travel writing. With a sprinkling of actual fiction, his work represents a well-developed ability for storytelling. His firsthand knowledge of western terrains and frontier character types, especially cowboys, gives his writing an entertaining authenticity.

The Red-Blooded is currently available online at google books, and Internet Archive and for kindle and the nook. Copies of the original edition can be found at AbeBooks. For more of Friday’s Forgotten Books, click on over to Patti Abbot’s blog.

Coming up: Josh Garrett-Davis, Ghost Dances
Posted by Ron Scheer at 5:30 AM