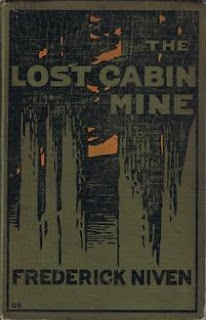 This early western by Scots-Canadian writer Frederick Niven (1878-1944) is a character study of a frontier outlaw with “good” bad man credentials. The Apache Kid is a congenial train robber, bank robber, and road agent, But he’s never been convicted of any crimes and socializes freely with any law-abiding citizens who care to have his acquaintance.

Plot. The novel is set in what we take to be British Columbia; the year is 1900. The narrator, known only as Francis, is a young adventuring Scotsman. Looking for work, he signs on with the Kid and his partner Larry Donoghue to accompany them on a two-month expedition.

The two men, driving a freight wagon, once encountered another man, Mike Canlan, who’d come upon a prospector stumbling out of the mountains. Perishing and deranged, he professed knowledge of a fabulous gold mine. It’s believed that he revealed the location of the mine—the “lost mine” of the title—to at least one of the three men. But so far no one has gone in search of it for fear he’ll be followed.

The journey to the mine with the Kid and Donoghue takes up much of the rest of the novel, as they encounter armed brigands at intervals demanding directions to the mine. These result in several fatalities, including the death of a man come to warn them of trouble, a hotel keeper, Pinkerton.

The Kid and Francis survive to reach the cabin. A search of the place turns up bags of gold nuggets and turquoise stones plus a stash of cash, all belonging to the previous (also expired) inhabitants. With a look at the mine, the Kid concludes that it is essentially worthless, the ore not rich enough to warrant hauling if off the mountain.

At the end, the Kid and Francis convert the gold nuggets to cash, split the money they found, and part company. Francis journeys to New York, where he finds a buyer for the turquoise. Altogether, he nets over $120,000. Not bad for starting out with only a few bucks in his pocket.

Returning to Edinburgh, he looks up the Kid’s family, as he has promised. And true to that promise he doesn’t speak to them, so that they can learn nothing of the Kid’s life or his whereabouts in America.

Character. We never learn the Apache Kid’s real name or anything about him. We are first introduced to him as “a lithe, sun-browned fellow” wearing a loose jacket over a black shirt with pearl buttons. “Round his neck was a great, cream-coloured kerchief that hung half down is back in a V shape, as is the manner with cowboys.”

On his legs were blue dungaree overalls, turned up at the bottom as though to let the world see that he wore, beneath the overalls, a very fine pair of trousers. On his head was a round, soft hat, not broad of brim, but the brim in front was bent down shading his eyes.

For all that, he bears himself modestly, without intending to draw attention, except that “in either ear there glistened a tiny golden ear-ring.”

Lives may be lost as he is called upon to draw his gun, but throughout the novel, the Kid behaves honorably, with an “open, cheery, and devil-may-care face.” His manner, Francis says, bears the stamp of daring, endurance, and self-possession.

Romance. Margaret, a pleasant serving girl at the Pinkerton restaurant is seemingly introduced to become the romantic interest. When she and Francis meet, he defends her from the insults of an over-familiar diner, which earns a smile and wave from her as he leaves later.

During his journey into the mountains, she surfaces in his thoughts. But on their return from the mountains, neither the Apache Kid nor Francis figures in her plans for the future. She already has a husband-to-be in the character of George Brooks, a fiery-tempered redhead who has already threatened the Kid earlier in the novel.

Anyway, the Kid tells Francis that Margaret would not do as a match for him. Many women would be attracted to him for admitting that he is an outlaw, he says, but she would love him only as a good man gone wrong. He wants a woman who neither fears nor doubts him, and while Margaret isn’t afraid of him, she has her doubts, and that’s not good enough for him.

Style and structure. The novel’s account of a long journey across hazardous terrain has echoes of H. Rider Haggard’s King Solomon’s Mines (1885) and Joseph Conrad’s Heart of Darkness (1902). Resemblance to Conrad’s story is especially strong, as the tone of Niven’s novel is often dark and foreboding.

Arriving at a mining camp by night, the men are greeted by a scene in which the stumps of felled trees glimmer with blue flames. Here they are stopped by two armed men demanding a map to the lost mine, and the Kid and Donoghue shoot them both dead. One dies horribly with a last gasp like the “quack of a duck.”

The effect is more unnerving to Francis than a scream, he says, and gives him a “drearier outlook on life.” The imagery of the scene is Poe-like, as the bodies of the two dead men are left to be eaten by wolves and buzzards. One seems to stare at Francis with open eyes, “his face lighting and shadowing, lighting up and shadowing pitifully in that ghastly glow."

Wrapping up. A journalist, writer, and traveler in both North and South America, Niven produced a long series of novels, largely set in Scotland and western Canada where he settled in mid-life. The Lost Cabin Mine first appeared as a novella in The Popular Magazine in 1908 and again as a serial in Western Story Magazine in 1921. Numerous stories appeared in Street & Smith publications from 1906 to 1930. His novel Hands Up! (1913), concerning a final chapter in the life of the Apache Kid, was reviewed here earlier.

A literary award, The Frederick Niven Prize, was inaugurated in 1949 by Niven’s widow to honor writers from Scotland. The award is administered by the Scottish Chapter of the International PEN Association.

The Lost Cabin Mine is currently available at amazon and AbeBooks. For more of Friday’s Forgotten Books, click on over to Patti Abbott’s blog.

Coming up: Wayne D. Dundee, The Guns of Vedauwoo