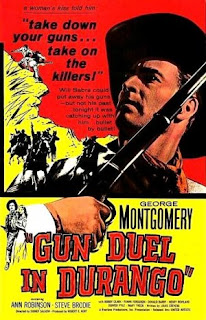 This straight-up western stars George Montgomery as the leader of an outlaw gang who wants to settle down with his sweetheart (Ann Robinson) and become a law-abiding rancher. The gang isn’t happy to see him go and tries to spoil his plans. The only way for Montgomery to put his past life behind him is to eliminate the gang—which he does.

That’s the plot in a nutshell, and there are few surprises along the way. Montgomery shows his true character by rescuing an orphan boy (Bobby Clark), and he comes to the aid of several Texas rangers who’ve been ambushed by the gang. Though he’s been AWOL for two years, we also see there’s still some magic in the old charm as he persuades a reluctant Robinson to take in the boy.

In a nearby town, Durango, the local sheriff (Frank Ferguson) and the banker are also taken in. They consider Montgomery trustworthy enough to give him a job at the bank. This arrangement suits the gang, whose leader (Steve Brodie) engineers not one but two robberies. Montgomery, however, has agreed to a 30-day truce with Brodie and gets himself called a coward for not taking a shot at the gang when he has a chance.

Brodie ups the stakes when he kidnaps the boy. Montgomery cooperates with the gang to get the boy back, but the sheriff is now onto him. He has to dive through a window in Robinson’s ranch house to avoid arrest. There’s a final confrontation at the gang’s hideout, where shots are fired and Montgomery turns what’s left of the gang over to the sheriff.

In the last moments of the film, Montgomery has received a governor’s pardon, the bank’s money has been returned, and the boy has been adopted by Montgomery and Robinson. All is well. A sheriff sees a lot of things in his job, Ferguson says with a smile, but “some are fine, mighty fine.”

Wrapping up. As a western this one is not above average. Montgomery gives a serviceable performance, but his heart doesn’t seem to be in it. To his credit, he looks comfortable on a horse, a skill that first got him into movies in the 1930s as a stunt rider.

Ann Robinson is a pleasant grace note, though given a wardrobe that first puts her in tight dude ranch-style Levis and a work shirt over a 1950s brassiere. Instead of looking like she just stepped from a dusty corral, she’s looks like she just stepped off the cover of a pulp fiction paperback. But once she is installed as a romantic interest for Montgomery, she softens, wearing a long dress that’s more feminine and 1880s.

The supporting cast includes Denver Pyle as a likeable Texas Ranger. Frank Ferguson plays the sheriff with warmth and depth of character. The outlaw gang has its share of screen time, and Steve Brodie shows an irritably nasty streak, but they never quite find the villainy in their roles. Don (“Red Ryder”) Barry may turn in a better performance elsewhere, but in this film he seems flat and lost.

Shot in Simi Valley, this black-and-white film looks like it was made in a hurry. Director Sidney Salkow did a lot of TV work, and the production may well reflect a TV-scale budget and shooting schedule. The honor-among-thieves ethic that the script has Montgomery’s character upholding is an interesting twist that might have been believable in other hands. But time and talent seem not to have been in ample supply for this western.

Gun Duel in Durango is currently available at netflix and at amazon. For more of Tuesday’s Forgotten Movies, head on over to Todd Mason’s blog.