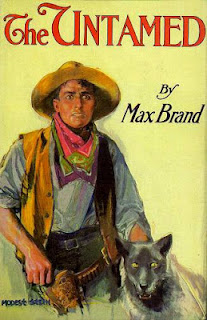 Max Brand burst on the scene with this striking novel less than two decades after Wister’s The Virginian and just as Zane Grey was topping the bestseller lists. In those three writers one can trace the evolution of western storytelling from history into myth. Wister’s Wyoming and his cowboy characters were drawn from life, while Grey romanticized the desert Southwest and the heroes and villains he put there. Brand stripped away realism and romance in The Untamed and left pure myth—with even a touch of the supernatural.

Plot. The “untamed” in the novel is a trio of beings, only one of them human, a young man Dan Barry. The other two are a black horse named Satan and a wolf-dog named Black Bart. All three of them are feral creatures, each in his way a little more than half wild. Dan was found wandering footloose in the desert by a cattleman, Joseph Cumberland, and a special friendship has grown between Dan and Cumberland’s daughter, Kate.

In early chapters, Dan makes an enemy of Jim Silent, the leader of a pack of train robbers. When Silent takes Kate hostage, Dan teams up with Texas Calder, a marshal who has been tracking the outlaw.

Silent and his gang rob a train, killing two of the guards. Hot on their trail, Texas and Dan catch up with them at a hotel, but Silent shoots Calder, and the marshal dies in the young man’s arms.

The rest of the novel is a fierce complexity of pursuit and counter-pursuit, with more hostage taking and a jailbreak, in which Dan is shot and nearly dies from loss of blood and a bout of fever. A daring rescue reunites Dan and Kate, and he leads a posse to the gang’s hideout. Silent meets his doom in a saloon, where he dies not in a gun duel but by being strangled to death by Dan.

Character. Dan is known as “Whistling Dan” because of his habit of whistling mysterious and melancholy tunes. From the start there is a youthful, trusting innocence about him. While he is a blindingly fast draw and an expert marksman, he only shoots to maim and never kills another man with a gun.

At first meeting, he is so easy-going that folks take him for a tenderfoot. But as he appears and disappears at will and his behavior seems uncanny, he develops a fearsome reputation. When angry, there is a yellow gleam in his eyes. By the novel’s end, some believe he is a werewolf.

Romance. Once all obstacles have been surmounted, the novel seems meant to end in marriage between Dan and Kate. She is thoroughly in love with him, but he is deeply wounded when he believes she has betrayed him to the gang. He begins calling her Delilah, after the temptress who double-crossed Samson.

When he is almost fatally shot, she helps him recover, much as western heroines had been doing since Molly, the schoolmarm, played nurse to the Virginian. Fully restored, he takes his leave again to go after Silent, but he refuses to properly kiss her goodbye. He wants to remove the taste of blood from his own lips before he will touch them to hers.

However, once Silent is dead and gone, Brand finds a reason to keep the two unwed. There is still in Dan the call of the wild. Hearing the sound of migrating geese overhead, he gets restless, realizing that he is unready for domestication. He leaves again, taking Satan and Black Bart with him.

In some ways, the novel is an anti-romance, portraying love as foolish and empty of real substance. Silent’s second in command, a man called Haines, falls in a big way for Kate when he first meets her. His affection for her drives some of the plot points, and his continued belief that he can win her heart while she’s the gang’s hostage makes him seem desperate and deluded.

Meanwhile, a rookie member of the gang, Buck Daniels, plots her escape by making a show of his irresistible effect on women. They like to be “manhandled,” he tells Haines. Ordering her about, he gets Kate to pretend to succumb to his charms. Then he allows her to slip away at night, while he is supposed to be guarding her.

Structure and style. This is a densely plotted novel. A complete synopsis would try the patience of even the most devoted reader. And every plot twist has its ripple effects. As one example, Dan is forced to break a man out of jail, thus becoming himself an outlaw. This development sets everyone against him, the real outlaws, the corrupt sheriff and his deputies, and the posse of cowpunchers that wants to hunt him down.

The narrative is full of surprises, especially as Brand starts making classical allusions. He compares Dan’s pursuit of Silent at one point to Hector and Achilles’ race around Troy. Descriptive details can be novel or unusual, as when the setting sun is described as “bulged at the sides” or when a cowboy is described as “a man built in rectangles,” rather like a Cubist painting.

Now and then, the narrator chimes in with an epigrammatic observation of his own, like this one: “The difference between success and failure in this country is just the length of time it takes to pull a trigger.” Or a realistic detail creeps in, with a touch of humor or irony:

The most important citizen was Lee Hardy, the Wells Fargo agent. Office jobs are hard to find in the mountain-desert, and those who hold them win respect. The owner of a swivel-chair is more lordly than the possessor of five thousand “doggies.” Lee Hardy had such a swivel-chair.

A fistfight is given a blow-by-blow account and can go on for pages. The train robbery is sharply detailed, including the robbers’ flooding of the engine firebox to prevent the train’s quick return to service.

Death scenes are protracted and Shakespearean. The Wells Fargo guard who dies after being shot says to Kate, “Tell the world—I died—game!” Then “his body writhed, and in the last agony his hand closed hard over hers. It was like a silent farewell, that strong grasp.”

A mark of Brand’s style is the drama he pumps into so many scenes. Hands are always reaching nervously for gun butts at men’s hips. In the final confrontation between Dan and Silent, a saloon crowd gathers breathlessly as the clock ticks down the minutes before Dan’s arrival and his boots are finally heard approaching on the boardwalk outside.

Wrapping up. Brand’s was a fresh, new voice as he transformed the emerging genre of the western. The book is full of energy sparked by an intelligence that is often found lacking in Grey. The plotting is a bit slapdash and doesn’t take the shape of a nicely conceived arc from beginning to end. But it does the next best thing. It throws one complication after another into the mix and without let up.

Brand’s hero has a mythic dimension that doesn’t so much elevate him above others in grit and courage. Instead, he has almost other-worldly powers, and the animals that travel with him are nearly human in their ability to understand and carry out his wishes. Although there is the occasional touch of realism, the story does not take place in a historical West. The landscape is more like ones found in dreams: stark, mysterious, dangerous.

The novel was made into a Tom Mix film in 1920 and again in 1931, as Fair Warning, with George O'Brien as Whistling Dan Brady. The original novel was followed by two sequels, The Night Horseman (1920) and The Seventh Man (1921). The Untamed is currently available online at google books and Internet Archive and for kindle and the nook.  For more of Friday’s Forgotten Books, click on over to Patti Abbott’s blog.
Tweet