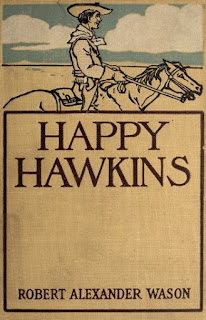 This rambling novel is narrated by a cowboy working on and off at a ranch called the Diamond Dot, somewhere in Wyoming. A foreman for the ranch owner, Jabez “Cast Steel” Judson, he spends most of his time as a companion for Judson’s daughter, Barbie. At the start of the novel, she is six years old, and at novel’s end she is grown up and married.

During those dozen or so years, Happy leaves the ranch for long periods of time, working on other ranches or traveling about. He spends two winters as watchman at a mining camp. In San Francisco, he takes a job handing out free samples of chewing tobacco.

Plot. There are several stories in the novel. One of them is a log of Happy’s picaresque wandering and adventures. Two others are mysteries that Happy eventually solves as he comes across clues during his travels.  One of these has to do with Barbie’s parentage and a dispute over either a woman or a silver mine called the Creole Belle.

The other concerns two brothers who have come from England to America, their whereabouts now unknown. Depending on which of them is still living, one of them is heir to a title and family estate back home. In the end, the two mysteries converge. And we discover that we have known at least three of the characters involved in them, living with their secrets and under assumed names.

Romance. A fourth story weaving through all the others is a love story—really a love triangle, with Barbie at the center. As she grows into a young woman, the friendship between Happy and her evolves from affection to ever deeper affection. In time, he realizes that he loves her.

But she falls head over heels for a younger man, Dick, whom her father hires as manager of the Diamond Dot. Then a game of cards with a visitor to the ranch turns abruptly menacing, and Dick is revealed as a gambler with a bad reputation. After an exchange of gunfire, he flees and Barbie is left with a broken heart.

Eventually, a neighboring rancher woos her, and with the encouragement of her father, she agrees to marry the man. But Happy can see that, in her heart, she still yearns for her absent lover, who by report turns out to be married to a woman he keeps in Laramie.

On the day of the wedding, even as the bride and groom are about to take their vows, Dick reappears to stop the ceremony. The woman in Laramie is not his wife but the sweetheart of a dead friend. Not only that. She is Barbie’s long lost mother. The wedding resumes, with a quick change of grooms, and Barbie and Dick live happily ever after.

Yet it’s a melancholy resolution to this strand of plot, since it leaves Happy alone and empty handed. He and Barbie have confessed their feelings for each other, but he knows well enough that he would always have been second in her affections.

Women. Barbie is a character found in several early western novels. She is fiercely independent and outspoken. She can ride and rope like a man, and she has the undying devotion of every cowboy who works for her father. She has been gifted with superior intelligence, hates school because book learning is too easy, and is forever at odds with her teachers.

Growing up, she refuses to wear skirts and wishes she’d been born a boy. It takes uncommon persuasion to get her to dress and behave like a woman. This changes when her father sends her away to get a college education. But it doesn’t change her disposition, which remains flinty and argumentative, especially as her father refuses to tell her anything about her mother.

Among the novel’s various mysteries, a minor though unusual one has to do with one of the ranch’s cowboys, Monody, who turns out to be a woman. Big, ugly, and ungifted with graces, she has befriended the young Happy and often tenderly “mothered” him, so that the bond of friendship between them has grown deep.

Mortally wounded in a gun battle with horse thieves, she makes him promise to let no one undress her should she die. Keeping that promise, he prevents the doctor from examining her. Only in death does he finally understand her secret, and he continues to honor her wishes by thinking of her as a man.

Structure. This episodic novel seems much like several stories that have been loosely cobbled together. The mysteries that are revealed at the end run more like a motif in the novel rather than a matter of narrative focus. They are in fact so convoluted that the clues to them are bewildering. Once explained, they are like the synopsis of another novel more extensively and thoroughly plotted than this one.

It makes more sense to think of the novel as a long character study. At the center of it is the narrator and title character, Happy Hawkins. A thoughtful man given to wandering about and having adventures, he has his opinions and points of view. With his particular sense of humor, he makes a believable and entertaining storyteller.

Wrapping up. About author Wason (1874-1955) there’s little to be found in the standard references. A biographical sketch in Who’s Who describes him as growing up in Ohio and leaving high school after one year. He is portrayed there as clerking in a general store, serving in the Army during the Spanish-American War, and tramping and “roughing it” in the West. His fiction shows an interest in moral and social philosophy, and he identified himself as a Socialist.

Wason has a half dozen or so novels to his credit and a handful of stories in the early pulps. Happy Hawkins appears in two more novels, Friar Tuck (1912), reviewed here a while ago, and Happy Hawkins in the Panhandle (1914). His last novel-length work was a science fiction serial, The Man Who Never Died, which appeared in 1915 in Bernarr Macfadden’s health and fitness magazine, Physical Culture.

Happy Hawkins is currently available online at google books and Internet Archive and for kindle and the nook. For more of Friday’s Forgotten Books, click on over to Patti Abbott’s blog.
Tweet

Image credits: Illustrations from the novel by Howard Giles