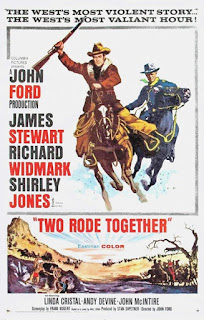 John Ford brings a light touch to this story of a subject he treated once before in The Searchers (1956). James Stewart is the “searcher” in this film, out to find women and children kidnapped by Indians. But unlike John Wayne’s darkly driven character in the earlier film, Stewart is comically larcenous and unprincipled. His services go to the highest bidder.

Plot. The two riders of the title are Stewart, the town marshal of Tascosa, Texas, and Richard Widmark, an Army lieutenant who enlists the reluctant Stewart in the rescue mission. Several white families are petitioning the Army to find the survivors of Comanche kidnappings. Stewart would rather work alone, but Widmark is ordered by Major Frazer (John McIntire) to go with him. The two are to make a deal with the Comanche chief, Quanah Parker (Henry Brandon), to exchange money for captives.

Among the many obstacles, including Stewart’s cynical distaste for the Army and his lack of regard for Widmark, there is a more troublesome fact. The children they are commissioned to find were lost many years ago. When found, a captured white boy has become a fierce young warrior beyond any hope of “deprogramming.” A white man’s wife doesn’t care to return, for reasons that become clearer later in the film.


In trade for weapons from Stewart (not money as agreed), Quanah Parker gives them the boy and a Mexican woman (Linda Cristal). She is the wife of another warrior, Stone Wolf (Woody Strode), who is drumming up a revolt against the chief. Escorting the two back to the fort, Stewart and Widmark are followed by Strode, who is shot dead by Stewart.

Civilization is not receptive to either returned captive. The boy commits an act of savagery that quickly has him in the hands of a lynch mob. The pretty señorita is shunned by the officers and their wives who regard her as damaged goods, degraded by being taken as an Indian’s wife.

Stewart defends her to no avail. Returning with her to Tascosa, he finds that during his absence a dimly incompetent deputy has been elected to his old job as marshal. And Cristal is scorned by a truculent saloon owner (Annelle Hayes). Fed up with the frontier, Stewart and Cristal board a stage and head for California.

Romance. A surprising face to appear in the cast is Shirley Jones, remembered more for movie musicals, Oklahoma! (1955), Carousel (1956), and The Music Man (1962). She plays the grown sister of a boy stolen nine years before. All she has of him today is a music box with a song he used to love.

She knows the effort to find him now is fruitless, but she feels guilty for not making more of an attempt to save him the day he was taken. She tells this story to Widmark, who has been in the Army for as many years as the boy has been missing. Widmark gets her to let go of the past by persuading her out of her pigtails and the men’s pants she’s been wearing and into a dress. He asks her to come with him to the dance at the fort.

Up until that point, two rubes (Harey Carey, Jr., and Ken Curtis) have been noisy and dim-witted rivals for her hand. In a farcical scene they are once and for all discouraged in this effort by being doused with flour. At the dance, Widmark awkwardly proposes marriage to her and she accepts.


Character. Stewart is another surprise in the film. As a man of compromised ethics, he is no George Bailey, Ransom Stoddard, or Jefferson Smith. He’s not a bad man, just someone who puts a high price on his own interests. We first see him lounging on the front porch of a saloon, his feet up on the railing, being served a beer. He wears a plantation hat and looks like he lives for his comforts.

We learn that he gets 10 percent of every revenue stream in town. Offered $80 a month to search for white captives among the Comanches, he says he won’t do it for less than $500 a head. Exhibiting not an iota of respect for military rank, he is in the opinion of McIntire no better than a scoundrel.

He may live up to his own code of behavior, but he crosses the line when he trades weapons for captives. They are rifles and knives that some day may well be used against whites. Widmark is a dutiful Army officer by contrast, a brave and decent man, and not the fool Stewart seems to think he is.

On the way back to the fort and traveling by night, the two come to differences over whether to continue or stop for a while. A campfire, Widmark argues, is sure to betray their presence to any Indians following them. When Stewart pulls a gun on him, it’s an ugly moment, and as they part company, it’s Widmark who seems more reasonable.

Indeed, Strode’s Stone Wolf has been on their trail, and Stewart's fire is meant as a lure. He then does away with the Indian when he emerges out of the night. Which simplifies matters. But it takes the rest of the movie for Stewart to fully redeem himself.

Themes. The serious theme—stolen women and children—and the story’s several comical interludes make for broad mood swings that mark this as a John Ford film. Stewart gives his patented performance as a man who stumbles over his words and loads lines with comic sarcasm. Playing a more reserved character, Widmark offers a likable man of admirable qualities, who evenly balances out Stewart’s lack of them.

There’s a four-minute two-shot in a scene between them early in the film as they smoke cigars and banter, bringing each of their characters enjoyably to life. It comes at 12.5 minutes into the movie and is well worth watching just for itself.

Typical of a John Ford film, the cast is huge. Among the comic characters is Andy Devine as a much overweight Army sergeant. The large gathering of families at the fort includes Willis Bouchey, as a man willing to pay good money for any white boy he can take back to his wife, who won’t know the difference. Jeanette Nolan plays a hysterical mother. John Qualen, with a thick Scandinavian accent, is a distraught man in search of his wife.

What is untypical is the film’s lack of sentiment. If you think of scenes like Stewart’s classroom lesson in democracy in The Man Who Shot Liberty Valance and feel-good scenes of family, social gatherings, and communal life, there’s nothing like that in this movie. Ford seems to take all this and look instead for the dark side of it.

Wrapping up. The film was shot in color and widescreen on locations in Bracketville, Texas. The screenplay was by Frank Nugent, responsible for other Ford films, Fort Apache (1948), She Wore a Yellow Ribbon (1949), The Quiet Man (1952), and The Searchers (1956). The script was based on a novel, Comanche Captives (1960) by Will Cook.

Two Rode Together is currently available online at youtube. For more of Tuesday’s Overlooked Movies and TV, click on over to Todd Mason’s blog.