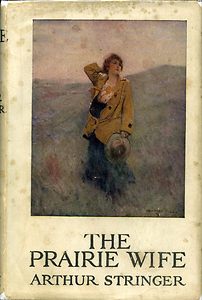 This is a novel that invites being read in different ways. For a while, I thought it was going to be a
satire, along the lines of Sinclair Lewis. Then it looked like it was going to turn into a melodrama about an unhappy marriage. After that it threatened to become a tragedy. But then nothing really adverse happened to anybody, and all ended quite happily.

The material is familiar, being about a young married couple making a life as wheat farmers on the Great Plains of Canada, somewhere between Winnipeg and Edmonton. In other western novels from the period, marriages founder as young wives fall victim to the malaise that comes with isolation and grueling work. The extremes of weather conditions take their toll, disease and accident claim lives, crops fail. Reality teaches harsh lessons if dreams themselves are not dashed completely. In this novel, we get a different kind of story. 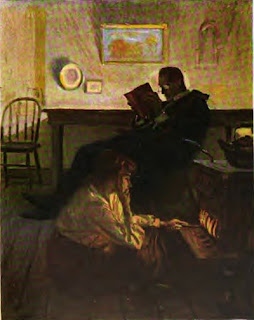 Plot. Young Chaddie McKail arrives with her new husband, Duncan, on a 1,700-acre patch of western Canada that is little more than a dot in a sea of grass. They have a tiny cabin and a few out buildings, with a team of horses, farm implements, and a carriage to get to and from a distant settlement, Buckhorn. A hired hand, a Swede named Olie, helps out with the farm work.

The narrative extends from autumn of one year to autumn of the next. And as the story is Chaddie’s, it is mostly an account of frontier domesticity. The marriage passes from a honeymoon stage into a series of unexpected upsets and eventually settles into a bond between equals.

Duncan has planted his entire acreage into wheat, taking the risk of losing it all to prairie fire or violent weather. Both threaten, but the wheat escapes serious damage. Duncan, meanwhile, has been making trips that take him away for days and weeks at a time. We don’t learn until the end that he’s been scheming to have a railroad line built across his property, which will make him a rich man. 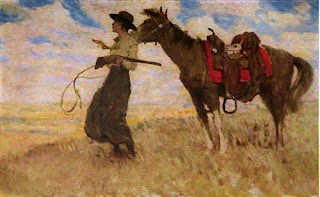 Romance. With a pair of newlyweds as central characters, we get a story that begins where most early western romances end. In novels where the heroine is a new bride, as in Emma Ghent Curtis’ The Fate of a Fool (1888), the couple has typically married in haste and the husband turns out to be a loser.

You expect that here, especially as the two have just married after a whirlwind shipboard romance, and she admits that she has become a wife before actually falling in love. But she has confidence in Duncan as a “gentleman” who is a civil engineer and has big plans to get rich quick. She enjoys calling him her “lord and master” and typically (and annoyingly) refers to him as “Dinky-Dunk.” 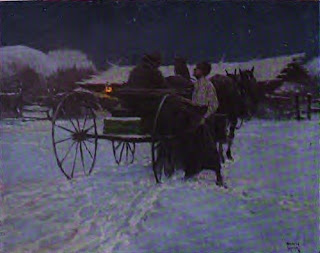 She has a swooning adoration of the man, whom you can tell between the lines is a bit stiff. Her playfulness sometimes shocks his Scots temperament. “I’m a wild woman,” she tells him. “You’ll never tame me.” He replies soberly that he won’t, but life will. She says she can’t let that happen and confesses that her high-spirited independence keeps her from feeling afraid out here on the lone prairie.

An English aristocrat named Percy Benson buys a nearby spread and becomes the McKails’ closest neighbor. A kindred spirit, he becomes Chaddie’s loyally platonic friend. Not in the best of health, he has come west for the arid climate.

When Chaddie becomes pregnant, Duncan hires a strapping young Finnish immigrant, Olga, who does both housework and field work. Built like a man and undaunted by physical labor, she’s a fortunate find since the war in Europe has depleted the labor market in western Canada.

The real romance, finally, is the tender sentiment that Percy begins to feel for Olga. Before long she is returning his interest, and by novel’s end the two are getting married. By then, Chaddie, who was deliriously in love with Duncan in January, has given birth to a boy in September. 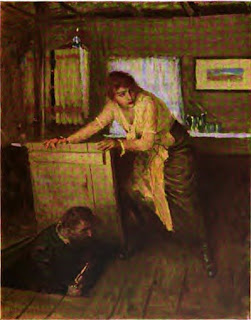 Structure. The novel is told in the first-person by Chaddie, who writes in a journal as if to a far-away friend, Matilda Anne. Entries begin with “Thursday the 19th” and continue, sometimes daily and sometimes with days-long lapses.

Embedded in the overall story of a year spent on a remote wheat farm are brief episodes of usually unexpected excitement. As one example, a business-like Royal North-West Mounted Police arrives looking for a cowboy who has killed a local farmer.  As the MP searches the stable, Chaddie sees the fugitive emerge from a pile of straw and beckons him inside the cabin to hide in the fruit cellar. There she keeps him captive until the MP can take him away.

Style. The exchange between her and the MP is one of the rare moments of real humor in the novel.  “I’m sorry,” he tells her, finally escorting the captive out the door, “but I’ll have to take one of your horses for a day or two.”

“What—what will they do with him?” I called out after the corporal.

“Hang him, of course,” was the curt answer.

The voice in the narration is that of a playful and somewhat silly girl used to European travel and the company of the social elite. So the writing style is conversational and full of references to cultural refinement: artists, musicians, and writers. She compares Percy, for example, to a character that might be found in an early Henry James novel.

For the most part, she gamely faces adversities and deprivations. But at times she turns abruptly dismal with discouragement. While this portrayal of the ups and downs of the human spirit is psychologically truthful, the account of her mood swings doesn’t contribute to an overall storyline. The effect is that you learn not to take her lapses into depression too seriously. You know she’ll snap out of it.

Wrapping up: Arthur Stringer (1874-1950) was born and educated in Ontario, Canada. He worked as a journalist and was a prolific writer, with 60 books, mostly popular romances, and 15 collections of verse. FictionMags Index lists almost 300 titles of his short fiction and poems. These were published chiefly in slick magazines, including Ainslee’s, Harper’s, Everybody’s Magazine, and Saturday Evening Post, in which The Prairie Wife first appeared as a serial in January 1915. It was the first novel of what became a trilogy, continuing with The Prairie Mother (1920) and The Prairie Child (1922).

Stringer provided numerous stories for films, from the Silent Era to 1941, with a western spoof in 1940, Buck Benny Rides Again, starring comedian Jack Benny. The Prairie Wife was adapted to film in 1925 with Dorothy Devore in the title role.

The Prairie Wife is currently available online at google books and Internet Archive, and for kindle and the nook. For more of Friday’s Forgotten Books, click on over to Patti Abbott’s blog.
Tweet