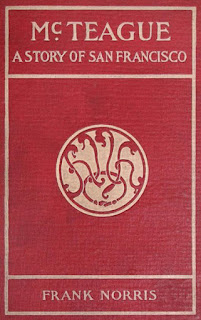 This is a cunningly harsh story of ignorance and avarice. It barely qualifies as an early western, and
then only in its last three chapters. The previous 20 chapters take place in a small neighborhood in San Francisco.

Readers of Cornell Woolrich’s Waltz Into Darkness will find much that’s familiar in this dark tale of obsession. It takes place in an amoral world among ordinary people with little more than a gift for self-preservation. Its central character, McTeague, is a man of brute strength and minimal intelligence. Self-employed as a dentist, he is set on the road to ruin when the girl he is to marry wins $5,000 in a lottery.

Plot. Like any good tragedy, the plot of the story is a simple one. McTeague falls in love with Trina, the girl friend of his best (and only) friend, Marcus. Generous to a fault, Marcus steps aside so that McTeague can court her. When she wins the lottery, Marcus feels the first twinges of jealousy. Not only has McTeague taken his girl; he has suddenly become a rich man.

Or so both men think. Trina has other ideas. The money awakens her inner Silas Marner, and she refuses to spend a penny of it. All goes well enough until Marcus’ resentment erupts into an open feud with McTeague. When Marcus leaves San Francisco to be a cowboy in southern California, the Health Board shuts down McTeague’s practice. Seems he’s never been to dental school. He blames Marcus for reporting him to the authorities.

Unable to get and hold another job, McTeague slides into a decline that has the couple living in abject poverty. Trina’s continued refusal to spend any of her lottery money enrages him, and his treatment of her grows abusive. Eventually, he kills her and makes off with the $5,000.

A fugitive now, McTeague fetches up in southern California. Restless with anxiety that there is safety only in moving on, he strikes out alone across Death Valley. There on the alkali flats under a blistering sun, a member of a sheriff’s posse catches up with him. The man turns out to be Marcus, eager to settle scores with McTeague.

Afoot and out of water, they engage in a life-and-death struggle over the bag of stolen money. When Marcus is killed, McTeague discovers that in his last moments Marcus has handcuffed the two of them together. So the story ends, like a Shakespearean tragedy, with all three of its central characters either dead or about to be so.

Character. In writing this novel, Norris deliberately places his narrative far outside the usual world of popular fiction. It offers up a coldly realistic view of his characters, who have few if any redeeming qualities and lack the intelligence to reflect with any depth on their lives. With only limited powers of reason, they are unable to resist their impulses and desires, often acting on animal instinct.

Literary history places Norris in company with French novelist Emile Zola and other naturalist writers. Trapped by heredity and social conditions, McTeague and Trina live insignificant lives amidst the great mass of the proletariat. Norris elevates them by casting them as principals in a tragedy. But he does not dignify or romanticize them. They are dead souls in a soulless world.


Romance. McTeague meets Trina when she comes to him for replacement of a broken tooth. As she sits in his chair, he becomes taken with a sudden dark desire for her, and when she is under ether, he is unable to resist kissing her. Awake again, she is surprised to hear him blurting out a marriage proposal, which at first appalls and terrifies her.

But she eventually yields to his entreaties. Though she has an instinctive fear of him and never finds him attractive, he overwhelms her with his physical strength. Crushing her in one of his embraces, he awakens “the woman” in her. The two are drawn together almost against their will—he by a nameless desire and she by the enjoyment of being “conquered and subdued.”

Style. A slender modern paperback edition of McTeague belies the fact that it is a substantial novel, 442 pages in its original edition. Though a simple and straightforward story, it unfolds very slowly, with lengthy passages of realistic description. The humble furnishings of the rooms where McTeague and Trina live are described in detail. So is life on the street that runs beneath their windows.

Of particular interest is one chapter’s description, act by act, of a variety show performance to which McTeague has taken Trina and her family. Arriving early, they take their seats.

While waiting they studied their programmes. First was an overture by the orchestra, after which came “The Gleasons, in their mirth-moving musical farce, entitled ‘McMonnigal’s Courtship,’” This was to be followed by “The Lamont Sisters, Winnie and Violet, serio-comiques and skirt dancers.” And after this came a great array of other “artists” and “specialty performers,” musical wonders, acrobats, lightning artists, ventriloquists, and last of all, “The feature of the evening, the crowning scientific achievement of the nineteenth century, the kinetoscope.”

And there follows a lengthy, informative account of what was to constitute a theatrical entertainment in the 1890s.

Wrapping up. Frank Norris (1870-1902) was born in Chicago, his family moving to San Francisco when he was 14. After studying painting in Paris, he was a student at the University of California, Berkeley, and at Harvard. In a brief life that followed, he worked as a foreign correspondent, reporting from South Africa and, during the Spanish-American War, from Cuba.

FictionMags Index lists 50 short stories published in the San Francisco Wave during the 1890s. In the years before his death, over a dozen more appeared in magazines such as Everybody’s Magazine, The Century, and The Saturday Evening Post.

McTeague was followed by The Octopus (1901) a novel about the conflict between the Southern Pacific Railroad and California wheat growers. The second volume in a projected Epic of the Wheat trilogy, The Pit (1902), was published after his death. There were two film adaptations of McTeague, the first in 1916 and then Erich von Stroheim’s monumental opus, Greed (1924), with Zasu Pitts, Gibson Gowland, and Jean Hersholt.

McTeague is currently available online at google books and Internet Archive, and for kindle and the nook. For more of Friday’s Forgotten Books, click on over to Patti Abbott’s blog.

BITS is going on hiatus for two months. Back in August.