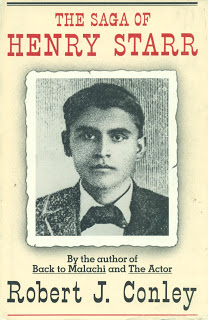 The mythology of bank robbers has long seized the public imagination. It’s as American somehow as apple pie and Fourth of July fireworks. Henry Starr was one of the most remarkable of them, for both longevity and tenacity. He was also a professional. A Henry Starr robbery was clean and well organized, a job well done, with a minimum of fuss. At the end of his career, he was believed to have robbed more banks than anyone in history.

If he was better at anything besides bank robbery, it was doing time in prison. There he was always a model prisoner and a frequenter of the prison library. Such behavior invariably won him early parole. Once he volunteered to disarm another prisoner who’d somehow got his hands on a loaded gun. For that kind of bravery, he got a pardon from none other than President Theodore Roosevelt.

While he may have had every intention of going straight each time he was released, there was always the fact that had got him behind bars in the first place. He was an Indian and one of the Starr family, which had not been known for keeping a low profile. A previous generation of Starrs had reputations that enlivened the pages of dime novels, not the least of them the wife of Henry’s uncle Sam—Belle Starr.

The story. Conley’s book is an account of Henry’s life, from age 17 to his final bank job 30 years later. Born in what was to become Oklahoma of mixed-blood Cherokee parents, he is a decent young fellow, who finds himself wrongly arrested for stealing horses and gets taken to Fort Smith, Arkansas, to appear before so-called Hanging Judge Isaac Parker.

The charges are eventually dropped, but Henry has had his first taste of a judicial system that preys on the powerless. Another false arrest, for transporting whiskey, results in a $100 fine. With that experience, he turns a corner and starts actually committing the crimes he’s assumed to be guilty of.

Before long he’s doing real time, and so his story goes—in and out of prison and in and out again. Determining to outperform every other bank robber with a reputation, he and his gang attempt to do something the Daltons had brazenly tried in Coffeyville, Kansas—rob two banks at the same time.

What can best be described as a daring stunt took place in Stroud, Oklahoma, in 1915. Unlike the Daltons, who failed badly, Henry’s gang escaped with the take, but Henry got shot and was arrested again. At the age of 43, he was back in prison, where once more he won early release. It was now 1919.

This time he contributed to what is surely the oddest development in his career. He agreed to reenact the double bank robbery for the movie cameras, and at the actual scene of the crime. Called A Debtor to the Law, the film was a cautionary tale meant to aid in law enforcement.

Offered a job to go to Hollywood and work in the movie business, he wisely decided to stick to a more honest calling. In 1921, he engineered another robbery, this time with a getaway car. But entering the bank vault, he was surprised by a shotgun blast at close range, from which he did not recover—dead at the age of 47.

Character. Conley does not glamorize Henry, though he does show how he was wrongly treated by whites in his youth. He learns early that being law-abiding and hard working will not keep him out of trouble—or make him much of a living. Turning to robbery becomes a career choice more promising for him than honest work.

Except for that one fact, Henry remains a decent, honorable man. He doesn’t drink or smoke or even partake of coffee. He deals straight with the men in his gang. In a robbery, he was calm and respectful of employees and customers, making every effort to keep anyone from getting hurt. Folks like him and welcome him and his current sweetheart to a barn dance, where he is invited to play fiddle for a while.

Storytelling. In Conley’s telling of this story, he lets the facts speak for themselves. The style is unembellished by drama or sentiment. For that you have to read between the lines, and they are there.

A running thread is the way that Henry is almost always alone. With the other members of the gang, he remains separate from them, content to involve white outlaws rather than other Indians, which would compromise tribal ethics. After a robbery, the gang simply disbands, its members never to be heard from again.

Only one man, Kid Wilson, comes close to being a loyal friend, but the bond between the two men is unspoken and finally broken. There are sweethearts, too, but flights from the law and frequent jail terms mean abandoning them—including a wife and infant son. “I’ve always been on my own,” he says. “That’s just a fact of life.”

Conley also uses the narrative to note the passage of time and the flood of events that show how the Old West was rapidly invaded by the modern world. Part of that flood was the influx of whites into Indian Territory, and the efforts by the federal government and the judicial system to legalize what was a massive land grab.

Wrapping up. Robert J. Conley is the author of more than 50 books of fiction and nonfiction. With degrees from Midwestern University in Wichita Falls, Texas, he has taught at several colleges. He has also written stage plays and published poetry. A registered tribal member of the Cherokee Nation, he has received numerous awards, including Spur Awards for his fiction.

Readers can find his books at amazon and Barnes&Noble. The Saga of Henry Starr is currently out of print but copies are available through Barnes&Noble and AbeBooks.


Robert Conley has generously agreed to spend some time here at BITS to talk about writing and the writing of The Saga of Henry Starr. So I’m turning the rest of this page over to him.

First of all, Robert, do you prefer “Indian” or “Native American,” or does it depend?
Personally, I don’t think it matters. I would rather say I’m Cherokee.

You’ve been able to watch western fiction evolve over the years. What current developments do you see?
I think I see more Indian writers getting published, and that’s a very positive thing. I even think I may have had something to do with that. D.L. Birchfield has credited me with “inventing” the popular novel with an Indian hero.

Your Saga of Henry Starr is now 25 years old. Would you write that novel differently today?
I probably would, but I can’t say exactly how it would be different.

Do you think there is a different audience for western fiction today?
I think it may be reaching out to more people, more women and more younger readers, but it is still not what it should be. There has been a trend by publishers to not label books “western” but something else like “frontier fiction” or even not labeled to place them on the “novels” shelf, perhaps “historical fiction.” That may help some. I don’t know. I’m not a publisher. I just write my books.


Do you try to write for both Native and Non-native readers? And how does that work?
Actually, when I’m writing I just try to write a good book. Once it’s published, I want everyone to read it and make me rich. I am most pleased, however, when I learn that Indians, particularly Cherokees, are reading my books.

What have been the most interesting reactions of readers to The Saga of Henry Starr?
The most interesting thing of all was when, just a few months ago, a film production company purchased an option on the book—after all these years. The irony of that is that I originally wrote the story as a screenplay but could not get anywhere with it, so I turned it into a novel.

What does the word “duyukduh” mean as it’s used in the novel?
It’s “right” or “proper,” the right way to act or right way to be. It’s a much more powerful word in Cherokee than are its English translations.

Have you found that fiction is an effective way to get Native American issues across to readers?
I believe that it is, it’s just not fast enough or widespread enough.

Talk a bit about how writing for the stage has affected the way you write a short story or novel.
I believe that a writer and an actor have much in common. Both have to be able to get into the minds of anyone, any characters, and understand how they think and feel. If I am an actor, I may be called on to play the part of a horrible killer, just as if I am a writer, I may be writing a story about that same character. I think that all of my theater experience has helped me in my writing.

For readers here who write westerns, what is your advice for the portrayal of Native American characters and subjects?
Don’t think you know anything until you have read everything you can get your hands on about the tribe you’re writing about, and try your damnedest to get to know some living members of that tribe and visit with them.

If a film were made of The Saga of Henry Starr, whom would you like to see in the lead role?
If it had happened years ago, I would have liked to have seen Charles Bronson. Today I’d like to see my friend Wes Studi. That’s not going to happen though.

What can readers expect from you next?
Two novels from Goldminds, The Brothers and Walking the Trail. Then, I hope, a novella called Wil Usdi: Thoughts from the Madhouse.

For readers who enjoy your work, what other writers would you recommend to them?
Any Max Evans, and anything by D.L. Birchfield.