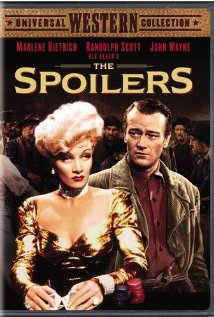 This 1940s gold-rush western is jaw dropping. For one thing, it has John Wayne in black face swapping “colored” jokes with African American actress Marietta Canty. What was probably meant to be cheeky and rib-tickling in 1942 looks just plain racially insensitive today.  For another, the movie has Randolph Scott as a slick crook. And it’s no fun watching him use his patently pleasant and winning persona to trick honest folks into trusting him.

Another thing. Veteran actor Harry Carey is more or less wasted in a small two-dimensional role. And while that makes three strikes, The Spoilers isn’t quite out. It has the saving grace of Marlene Dietrich as a sultry and spectacularly dressed saloon owner. Her scenes with both Wayne and Scott are steamy with flirtatious bantering and sexual innuendo.

Plot. Another point in the film’s favor is its plot. Based on a bestselling Rex Beach novel of the same name, published in 1906, The Spoilers tells a ripping story of claim jumping in the Alaska gold fields. John Wayne and Harry Carey are mine owning partners whose claim to their mine is being challenged in court.

A crooked judge (Samuel S. Hinds) promises to clear up the cooked-up dispute and puts the mine and all its assets into receivership. He’s in cahoots with the local gold commissioner (Scott), who takes a safe full of gold from the mine’s offices as soon as they can lay hands on it.

Wayne is first trusting that the case will be settled fairly, while Carey trusts no one, and the two men part company for a while. When it’s clear they are being had by a bunch of “spoilers,” they engineer a bank robbery and, after dynamiting the front door, make off with their safe.

But during the robbery, the town marshal is accidentally shot dead by another man, and Wayne is blamed for the killing and thrown in jail to face murder charges. Scott arranges with the jailer to allow Wayne to escape, intending to have him shot dead as he attempts to ride off. But Dietrich foils that plan and gets Wayne safely out of jail herself.

To take back their mine, Wayne and Carey drive a train locomotive through the barricades set up around the perimeter and shoot it out with the armed men on guard. That leaves only a matter to settle with Scott, and the two men have a knock-down-drag-out fistfight that demolishes most of the saloon. When it’s done, Scott lies battered in the street, and Wayne comes around in the arms of Dietrich, bloody but smiling.

Romance. At the film's start, Dietrich and Wayne have been an item of long standing, but there’s trouble between them as he arrives in town on a ship from Seattle. On board, he’s befriended the judge’s daughter (Margaret Lindsay), unaware that she knows of the plot against him. Dietrich suspects him of being untrue, and the scenes between the two are less than sanguine.

Wayne plays tough with her, hoping she’ll relent, but he’s disappointed her once too often. She tosses him out of her apartment, a comfortably furnished retreat upstairs from the saloon. One of her employees, a gambler by the name of Bronco (Richard Barthelmess) has romantic hopes for her himself, but she keeps putting him off.

Enter Scott, who sets his eye on her, too. She strings him along for reasons of her own. As an investor in Wayne and Carey’s mine, she has an interest in keeping the mine in their hands. While Wayne is in jail, she pays a call on Lindsay, the other woman. By this time, father and daughter know the jig is up and are packing their bags to get out of town.

Why are you running away, Dietrich wants to know. A woman sticks by the man she loves. And that’s exactly what Dietrich does, breaking Wayne out of jail. Having learned of Scott’s scheming, she pretends to grant him some privileges. Thinking Wayne is dead, he is quick to take advantage.

She’s already said the only kind of brawl she’ll allow in her saloon is one that is over her. And that’s what she gets. When Wayne discovers Scott in her apartment, the fight is on. And as the two men duke it out, she watches anxiously from the balcony outside her rooms. It’s a nearly even match, and both men finally collapse from exhaustion. Dietrich gets to pick the winner, and kneeling beside Wayne, she’s finally got her man.


Humor. There’s plenty of humor in this movie, with a secondary plot involving two comic characters. Banty and Flapjack Sims (George Cleveland, Russell Simpson) are partners whose story is a farcical parallel to Wayne and Carey’s. The two men wind up in court, where a dispute over their mine is decided in their favor. For the rest of the time, the two are mostly drunk and quarreling, always good for some laughs.

The racial humor is something else. Marietta Canty was the stereotypical Hollywood housemaid, bug eyed and wise cracking, easily startled and likely to drop whatever she’s carrying. Tired of being the only “colored” folk in town, she says she’s “gettin’ mighty tired pretending Eskimos is from Virginia.” Whatever that’s supposed to mean.

Putting on black face for the bank robbery, Wayne and Carey briefly amuse each other talking like it’s a Jim Crow minstrel routine.  Later, when Wayne shows up in Dietrich’s apartment, Canty takes him for a handsome black stranger, and again he does his shuck and jive talk. When she sees it’s Wayne, she says, “You ain’t no colored boy. You’s washable.”

Meanwhile, a Chinese prisoner in the town jail gives Wayne a noisy reception when he is thrown in a cell. The jailer tells the man to shut up. “You talk like a foreigner,” he says. More laughs. Meanwhile, a sure-fire comic surprise for modern-day viewers is a scene in which Wayne appears in hat and gender-bending feather boa.

Wrapping up. For a movie with three strikes against it, The Spoilers has its moments. Set in Nome, Alaska, in the year 1900, the film makes an honest effort to look like the real thing. The main street of town is a muddy quagmire. And the turbulent, alcohol-soaked days and nights of free-spending miners is portrayed with something like accuracy. It was shot in black and white and filmed on location at Lake Arrowhead in the San Bernardino National Forest and (according to imdb.com) Yukon, Canada.

The shootout at the mine is exciting, and the final fistfight between Wayne and Scott is a punishing four minutes long. The stunt work has the two fighters’ bodies catapulting around every square foot of the saloon. It’s a thrilling and amazing climax.

The film was directed by Ray Enright, responsible for numerous westerns from the 1920s to the early 1950s, including Albuquerque (1948), reviewed here recently. Veteran screen writers, Lawrence Hazard and Tom Reed provided the script.

Marietta Canty appeared in numerous films during 1940-1955, cast routinely as a maid. You’ll find her in Father of the Bride (1950), A Streetcar Named Desire (1951), The Bad and the Beautiful (1952), and Rebel Without a Cause (1955). She has a wonderful comic presence on screen, and you have to wonder what she might have achieved had other kinds of roles been written for her. It’s an embarrassment now to watch that talent being subverted to reinforce a racial stereotype.

Originating as a novel by Rex Beach (1877-1949), the story had already been adapted to film three times, in 1914, 1923, and 1930 (the last starring Gary Cooper). Appearing in a minor role in the 1942 version was William Farnum, who played the lead in the 1914 version. Robert W. Service appears briefly as himself in Dietrich’s saloon, writing a poem about the shooting of Dan McGrew.

Richard Barthelmess, as Bronco Kid Farrow, was ending a career after roles in almost 80 films, starting in 1916. He starred opposite Lillian Gish in D. W. Griffiths’ Broken Blossoms (1919) and played the lead role in Henry King’s Tol’able David (1921).

The Spoilers is currently available at netflix and online at youtube. So is the 1914 silent version. You can find DVDs at amazon and Barnes&Noble. For more of Tuesday’s Overlooked Movies and TV, click on over to Todd Mason’s blog.
Tweet