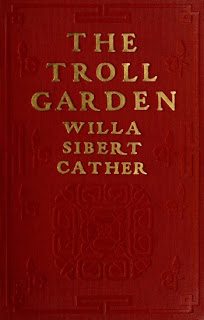 
The Troll Garden was a collection of stories written during her years living and working in Pittsburgh, after taking a degree in English from the University of Nebraska. Three of the stories are related to the West, two of them set in Kansas and Wyoming and the third about a woman from Nebraska on a trip to Boston. They portray the Plains as bruisingly harsh for men and women with certain creative and artistic sensibilities. Themes of repression, self-denial, escape, and entrapment run throughout.

Character. Early westerns typically deal with the making of men who achieve or demonstrate their manhood through tests of their character. Cather’s stories echo that same concern. However, her men exhibit strength of character in gentler ways. No gunning down villains. Still, they are decent men—what the characters in other early westerns would call “white.”

They are armed only with a protective concern for the vulnerable and a contempt for the selfish, small minded, and thoughtless. Jim Laird in “The Sculptor’s Funeral” may be the finest example. He defends the memory of a dead man who acquired fame as an artist. Then he condemns his money-grubbing fellow townsmen for their ill will toward the man and their callous disregard of principle.

There is a sweeter poignancy in a man’s tender regard for a dying woman in “A Death in the Desert.” Everette Hilgare might resent his more famous brother and envy him for the privileges that go with fame, including the adoration he has won from the girl who was Everett’s first love. Still, he chooses generosity and patient kindness instead.

East vs. West. Meanwhile, life on the prairie, far from the centers of culture, is portrayed as soul-crushing. And you wonder that Cather came around to celebrating the lives of the pioneers, as she eventually did. While the gravitational pull in other fiction is westward, almost all her characters in these stories are drifting eastward.

The plains are a troubling presence. They can be portrayed in the stories as calmly death-like, as in “The Sculptor’s Funeral”:

The lamps in the still village were shining from under the low, snow-burdened roofs; and beyond, on every side, the plains reached out into emptiness, peaceful and wide as the soft sky itself, and wrapped in a tangible, white silence.

Or they are stark with menace, as seen through the windows of a train in “A Death in the Desert”:

The grey and yellow desert was varied only by occasional ruins of deserted towns, and the little red boxes of station-houses, where the spindling trees and sickly vines in the blue-grass yards made little green reserves fenced off in that confusing wilderness of sand.

Poverty can exist anywhere, but rural poverty has a grimness all its own. In “The Wagner Matinee,” Cather gives this  description of subsistence living on a homestead:

I saw again the tall, naked house on the prairie, black and grim as a wooden fortress; the black pond where I had learned to swim, its margin pitted with sun-dried cattle tracks; the rain gullied clay banks about the naked house, the four dwarf ash seedlings where the dish-coths were always hung to dry before the kitchen door.


Themes. The stories are not anti-western but anti-romance. Isolation is often celebrated in the early western because it means freedom from social restrictions. The uncivilized frontier feeds the spirit of individualism. And for the hero who bravely confronts the obstacles of villains and raw wilderness, there is a girl at the end who will happily share her life with him and banish any loneliness.

Cather pretty much says bunk to all that. There are wounds inflicted by isolation that leave a lasting mark. There are crimes against the human spirit that no lawman or a posse with a rope can bring to judgment. And love does not show up in the end to heal all wounds. Don’t kid yourself, she seems to be saying. Life at best is largely about damage control.

Women in the stories are generally intelligent, strong, and gifted, but life betrays them. They fall victim to “waste and wear.” Romance, in fact, plays a role in that betrayal. The woman living a wretched life on a Nebraska homestead in “A Wagner Matinee” once gave up all for love, eloping with a handsome younger man of limited means.

Wrapping up. Reading these stories alongside contemporary popular fiction set in the West, you see more clearly how the West was romanticized by other writers. Cather would eventually find a romantic turn of her own in Death Comes for the Archbishop (1927). But here her attitude is colder and less forgiving, and one thinks of Stephen Crane, whose story “The Blue Hotel” (1899) finds a group of travelers in a grimly inhospitable settlement on the Nebraska frontier.

The Troll Garden is currently available online at google books and Internet Archive, and for kindle and the nook. Used copies can be found at AbeBooks. For more of Friday’s Forgotten Books, click on over to Patti Abbott’s blog.
Tweet