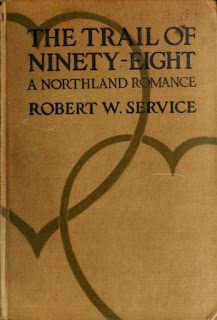 Robert W. Service (1874-1958) was already a household name when his first novel was published. He’d become famous as the writer of verse about the Klondike gold rush of 1897-98. Unlike Jack London, he had not been there himself and was relying on stories told by those who had.

This hefty, 514-page novel is a compendium of those stories, woven into what reads like first-person reportage. Its central character, Athol Meldrum, is a young Scotsman, adventuring in the American West and swept up in the stampede to the Yukon. A steamer trip takes him to Skagway and we follow him on the long perilous trail to Dawson City.

He teams up with three other men, and despite a tenderhearted temperament and the flagrant immorality of the mining camp, he works claims that produce a respectable fortune. Over the course of three years, he toughens up, but only at the cost of his idealism. And he has close encounters with death, being hospitalized with typhoid and nearly dying from starvation while lost for weeks in the wild.

Plot. Athol’s adventures are the through-line of the novel. One follows on the heels of the other. What holds our interest is the gamble he is making against the odds to survive and make good. Pitted against him is the hostile terrain, where the 37-mile trail from Skagway to Dawson is lined with the graves of men who have succumbed from accident and exhaustion.

Then there is the climate, where the Yukon River freezes over each winter and isolates Dawson from the rest of the world for eight months of the year. And a man without a fire to warm himself will freeze to death in fifteen minutes.

Athol is also the prey of fraudulent officials and corrupt politicians eager to make a fortune through graft and duplicity. After a mad dash to stake a claim in a new field and waiting hours to register his claim, he discovers that someone has already jumped it. Meanwhile, the mining camps, with their dens of iniquity, always threaten to siphon off every ounce of gold he may have in his poke.

Romance. The two hearts on the book cover are a clue that it is about more than a quest for gold. While still on the boat to Alaska, Athol takes note of a sweet damsel, Berna, who is in considerable distress. She is traveling with her grandfather and a larcenous aunt and uncle, the Winkelsteins, who want the old man’s money. When he dies in an avalanche on the Chilkoot trail, they finally get their hands on it.

Athol keeps trying to rescue Berna, but the Winkelsteins have welcomed the attentions of a wealthy gold miner, Jack Locasto, who wants to marry her. Interfering with Locasto, Athol wins the man’s murderous contempt. The rivalry goes on hold temporarily as Locasto is challenged to a fight and gets thoroughly beaten by one of Athol’s friends.

Berna first wants Athol to marry her, for protection from Locasto. He demurs, insisting that theirs can hardly be true love since they scarcely know each other. He wants to wait a year. Then when he changes his mind, she has changed hers. No, she agrees, you were right. Let’s wait a year.

When a year passes, he is delirious with love for her but falls ill with typhoid and misses the wedding. Finally reviving, he finds that Locasto has won her away, and she is working in a dancehall. A fallen woman now, she feels unfit to be a bride. And so it goes, until Locasto has left the Yukon, physically shattered by near death in the snow, one hand amputated.

Berna still believes herself unworthy of marriage but agrees to live “in sin” with Athol. There his older brother from the Old Country finds the two of them. Scandalized, he attempts to separate them by pretending to fall in love with her. This fails in a spectacular way, as Locasto shows up again, and the oil lamp Berna throws at him ignites a fire that burns down much of the town.

In the end, Locasto and Garry have died in the fire, and Berna disappears. So a very melodramatic romance between star-crossed lovers comes to a fiery end. In an epilogue, Athol believes himself visited by the spirit of Berna in a snow-covered garden, apparently back at the family estate in Scotland, and he welcomes her in what seems to be the embrace of death.

Style. While the love story is overblown soap opera, the account of the gold rush itself is richly detailed and informative. The throng of gold rush stampeders on the trail is graphically described, including the fates of the horses:

I remember stumbling across a big, heavy horse one night in the gloom. It was swaying from side to side, and as I drew near I saw its throat was hideously cut. It looked at me with such agony in its eyes that I put my handkerchief over its face and, with the blow of an axe, ended its misery. The most spirited of the horses were the first to fall. They broke their hearts in gallant effort.

Part of the journey is by raft, and Service devotes some furiously paced prose to the description of shooting a stretch of treacherous rapids.

In Dawson, life and living conditions on the streets and in the saloons and dance halls are portrayed with the lurid drama of a Hieronymus Bosch painting. You learn of the cost of living, the price of eggs, candles, and horseshoe nails. Someone will stand in the long line at the post office to pick up your mail for a dollar a letter.

As Athol takes a job as a day laborer, you also learn how the gold fields were worked. In the mines, the frozen earth is thawed by fire, then buckets of it are raised by windlass to the surface. Finally, the spring thaw provides water for diversion through sluices to wash the earth from the gold. By the end, steam-driven hydraulic systems are being introduced.

Wrapping up. Service is remembered chiefly as the poet of the Yukon. His first collection, The Spell of the Yukon (1907) was reviewed here earlier. After briefly serving in the Ambulance Corps during WWI, he penned the poems in Rhymes of a Red Cross Man (1916). Besides The Trail of ’98, he wrote several other novels of romance and adventure. A few of his poems have served as the basis for films.

The Trail of ‘98: A Northland Romance is currently available online at google books and Internet Archive and for kindle and the nook. For more of Friday’s Forgotten Books, click on over to Patti Abbott’s blog.
Tweet