Somehow three years have come and gone—and a gazillion words posted here. Blogger traffic data, for
what they are worth, noted a couple weeks ago that page views here passed a total of 300,000. And BITS, which started out on an impulse with fairly vague ambitions (read here), has evolved into whatever it is today.

And that’s been chiefly reviews of what I’ve been calling “early westerns” (1880-1915) and reviews of recent western novels plus interviews with their writers. I’ve also been discovering writers who published during the 1960s-70s, a favorite of them being John Henry Reese. Patti Abbott kindly includes links to these on her weekly Friday’s Forgotten Books.

Then there’s been a western movie review each week for Todd Mason’s Overlooked Movies and TV. Gleaning obsolete and forgotten words and names from the early westerns, I’ve kept a running Old West glossary going, now going on 65 pages. For a while, I put up a lot of photos, vintage ones of the Old West and many of LA today and the desert where I live, snapped with my cell phone.

During the past year I retired from a lifetime of paying jobs that started with radio announcing and measuring cornfields for the Agricultural Stabilization Commission, and ending with a teaching gig at a major West Coast university. I had long dreaded retirement, and as I said here a year ago, blogging has helped keep me from dissolving into a blur. 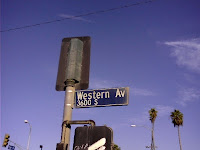 The pleasures of the text. I enjoy reading, and I like writing about what I notice as I read. I find ideas embedded in the words of a novel and the plot and dialogue of a film. I’m looking for intelligent design, I suppose. The ideas may originate with the writers themselves, or they may be just part of the zeitgeist that slips into the story.

A writer asked me once whether I could review more books by living writers. It would help build their audience. I understand that but don’t see my main purpose to be selling books. A lot of reviews today are like that—a sales pitch, trying to rev up your interest like a movie trailer. But as someone who hates being endlessly sold to by every channel of the media, I don’t want to be adding to all that noise.

I’d rather share something that will cost readers nothing. And that something is a sense of wonder in the magic of storytelling—how every writer goes about it in their own way. I also marvel at how the western has gone on materializing itself and evolving over more than a century. And if I can, I’d like to show some of the many ways to take pleasure from a western story. If that makes you want to read a book yourself, I'll be pleased, but it's not necessary.

So, yeah, my “reviews” get pretty long. I give credit to anybody who reads them to the end. Long before we lost Roger Ebert (and I’m sure going to miss him), I realized that I was trying to talk about western novels the way he talked about movies. I can’t say for sure what way that is, except that plot is only one of many elements that go into the telling of a story. And taking readers outside the box of their expectations (like coloring outside the lines) is the gift of a writer, added value and not a drawback.

The year that was. Anyway, I thought I’d close by listing the posts that have drawn the most readers over the past months, going back to January 2012. You can see it's a mixed bag. But if you are curious about what others have clicked to at BITS, here are the top 10 pages, in descending order:

Maria Amparo Ruiz de Burton, The Squatter and the Don (1885)

Ralph Beer, “The Other James Crumley”

Ray Bradbury, “The Last Night in the World”

Wrapping up. A couple years ago I set a goal of reading the first books of fiction set in the West by every writer who began publishing between 1880 and 1915. A list that started with 35 writers expanded to well over 100, but I’m now reaching the last of them. With a reading of Helen Hunt Jackson’s Ramona (1884), I hope to be done.

Thanks to the encouragement of many who have taken the time to post comments here and send email, I will then set to completing a book about all of them—the writers who invented frontier fiction. It looks to be a major project, and I’m planning to spend the next two months at work on it. So as the posts slow down to a stop here, worry not. . .