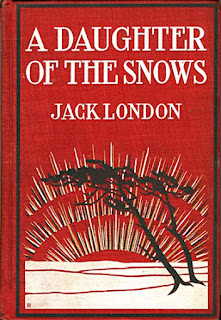 Here’s one for the white supremacy bookshelf. Hard to find a book with more crack-brained ideas
about race than this first novel by Jack London. Set in northern Canada during the gold rush on the Klondike, it’s also a mixed bag of yarns about miners and adventurers on the north frontier.

The daughter of the title is Frona Welse a spirited and fiercely independent young woman whose main grievance is that she wasn’t born male. Being a woman she has to settle for living vicariously through the lives of adventurous men. There’s also the nuisance of amorous advances by men who don’t live up to her ideals.

Plot. The novel begins as Frona steps off the boat at Dyea, Alaska, where she grew up at a trading post. A young woman of 20, she has been away for ten years, getting an education in the States. Now returned, she is hardly changed from the free-spirited motherless child who was once friends with the men who trapped and prospected in the Canadian interior.

With the gold rush in full swing, she crosses the Chilkoot Pass with thousands of others and heads for Dawson City, in the Yukon. There her father, Jacob Welse, seems to own and run every enterprise in the territory.

As autumn darkens into sub-arctic winter, there are new arrivals, including Corliss, a tenderfoot mining engineer and Gregory St. Vincent, a journalist and world traveler. There’s a lot of talk and little action, however, until the last chapters when miners and prospectors head up river to wait for the spring thaw.

As the river ice is breaking up, Frona and the others discover a man in some distress on the other side of the raging torrent. She and two of the men paddle a canoe across to attempt a rescue. Braving the surging waters and dodging ice floes, they bring him back. Almost home free, they are caught in the path of a massive ice jam that breaks loose, flinging them ashore and crushing one of them to death.

On the heels of that narrow escape, Frona discovers a miners court in session. They have been called together to hear evidence against St. Vincent, who has been falsely accused of a double murder. Acting as his attorney, she argues persuasively for acquittal, but the jury is set on seeing him hang.

Stricken by guilt, he finally admits to watching the killing of the victims without lifting a finger to prevent either death. When the killer, an avenging Indian, materializes at the last moment to confirm St. Vincent’s story, he is saved from execution.

Romance. Frona is a hero worshiper and would only be happy with a man like her larger-than-life father. St. Vincent first clicks with her because he has been an intrepid adventurer who has explored remote regions of the world, finding “life and strife” almost everywhere. She takes to him for his “healthful, optimistic spirit.” Expecting love to come to her in a “great white flash,” she mistakes a display of the aurora borealis for a sign and agrees to marry him.

But St. Vincent wins her utter contempt when he admits to doing nothing to prevent the murders. Having accepted food and lodging from the victims, he was bound by the code of the North to help defend them.

Meanwhile, Corliss slowly shows that he’s equal to the North. He demonstrates his grit on the ice-strewn and turbulent river by bravely risking his life to go to the aid of a complete stranger. Frona has turned him down once, saying she only wants him as a friend. We aren’t told at the end, but maybe he has a chance to win her heart again.

Character. No suitor matches the stature of Frona’s father, Jacob. The narrator describes him as a “captain of industry and a splendid monopolist.” He is a one-man government, ruling 100,000 miles of territory. He has built trading posts along the Yukon River and the steamboats navigating its waters.

Born “a common man,” he subscribes to a doctrine of social Darwinism, the survival of the fittest and strongest. He believes weakness is a sin. “Conventions are worthless for such as we,” he tells Frona.

They are for the swine who without them would wallow deeper. The weak must obey or be crushed; not so with the strong. The mass is nothing; the individual everything; and it is the individual, always, that rules the mass and gives the law. A fig for what the world says!

Corliss has the makings of character but is untested. In time, he falls under the influence of the North, where men strip off the veneer of civilization. Free of artificial social constraints, men out here “lived frankly, laughed honestly, and looked one another in the eyes.” After a winter in Dawson City, Corliss has become an advocate of “living strenuously.” Put to the test in the daring river rescue, he demonstrates that he can face death bravely and fearlessly.

White and nonwhite. London’s white characters are convinced of the superiority of the white race. Frona is its head cheerleader. She admires physically strong men. By her estimate, the “weak and effeminate” must vanish from “the world stage.”

By this she means not just physical strength, but also strength of spirit, for man is above all a fighter, and it takes both kinds of strength to fight. Advocating her father’s belief in natural selection, she argues that Anglos and Teutons have proved to be the most adaptable. Her friend Captain Alexander of the NWMP agrees. “The white man,” he says, “is the greatest and best breed in the world.”

Style. Structurally, the novel seems aimless much of the way through. There are threads of plot, but they are hard to distinguish until looking back from the final chapters and connecting the dots. For much of the way, the novel seems to be little more than a vehicle for ideas about heroism, gender, frontier ethics, and racial superiority. The river rescue and murder trial come as self-contained stories introduced into the narrative with abrupt shifts of focus.

For all that, the novel does provide some realistic detail of the Klondike’s brief moment in history. And there is the occasional description of mountain grandeur. Mostly matter of fact and unadorned, the narration shifts gears to a heroic scale in the chapters devoted to the river rescue. There the epic tone wants to soar like Homeric poetry. The effect may have been grand in 1902, but it seems pretty dated now.

Wrapping up. Jack London (1876-1916) was born in San Francisco. After a brief time in the Klondike during the height of the gold rush in 1897-98, he returned to California to make a living as a writer. Self-described as a socialist, he ran for political office and traveled widely on lecture tours.

The individualism championed in A Daughter of the Snows presents a curious contrast with the views commonly advocated in socialist thought. In the novel, London holds instead to a belief in survival of the fittest and strongest. After reading A Daughter of the Snows, it’s easy to see Call of the Wild (1903) as an animal fable with the same point of view.

A Daughter of the Snows is currently available online at google books and Internet Archive and for kindle and the nook. For more of Friday’s Forgotten Books, click on over to Patti Abbott’s blog.
Tweet