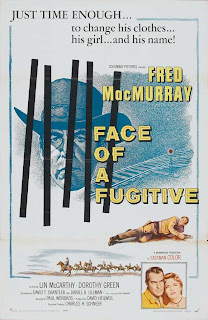 This film showed up on a list of noir westerns and, depending on how you define the term, it probably belongs there. It borrows from four classics I can think of: Shadow of a Doubt, High Noon, Shane, and Yellow Sky. But its thoughtful script and direction give it more than enough originality.

The first couple of minutes, you have to get over thinking of the TV series, “My Three Sons,” because the lead is played by Fred MacMurray. Then you mentally rewind to Double Indemnity and give the man a cowboy hat, and you recognize the type. Not a bad man, but ethically compromised, and with intelligence and a wry sense of humor about the ironies of life.

With his ordinary-guy face, resonant voice, and physical presence, MacMurray could seem to bring this off without effort. And Face of a Fugitive gives him ample room to do all that. Here he’s a good bad man, who starts out in handcuffs and quickly gets into far deeper trouble.

The plot when you look back at it is pretty contrived, but you don’t notice that as it unfolds. MacMurray is being hunted for the killing of a deputy sheriff, a crime committed by his younger brother, who dies of a gunshot wound as soon as we’ve got past the exposition.

MacMurray gets off a train in a peaceful mountain town where he pretends to be someone else. He has 24 hours to move on before the wanted posters arrive with his picture on them. In that time, he befriends a young sheriff trying to enforce the law with a local rancher who refuses to stop fencing off public lands for his own cattle. He also gets to know an attractive and lonely widow with a precocious 7-year-old daughter.

Before it’s all over his true identity is revealed, and in a prolonged shootout in the darkened saloon of a ghost town, he dispatches the truculent rancher and his cowboys, one by one. (All of them authentically skinny, the cowboys include a youthful James Coburn with his already patented sneer.)


Direction of modestly budgeted westerns can be pretty pedestrian and uninspired, like the George Montgomery The Lonely Gun (1954), which I bailed on before watching Face of a Fugitive. This film is another story. It was directed by Paul Wendkos, whose long career was mostly in TV, beginning in the 1950s with Playhouse 90.

Wendkos’ first shot, a closeup of handcuffs around the wrists of two men promises some inventiveness. For a moment, as we see the faces of the two men, we aren’t even sure which one is the prisoner. And the film continues to keep up that kind of interest, building suspense as time begins to run out for both of its central characters, the wanted man and the sheriff.

Equally interesting is the depth of character that was surely there in the script and was allowed to emerge in several unhurried scenes. A simple exchange of a storekeeper selling MacMurray a revolver manages to register levels of unspoken subtext. On the one hand is her quiet yearning for a world where guns are not needed, and on the other is his knowledge of the vulnerability of a man without one.

I like how a good western hooks you into that world. The threat of violence lurks in the shadows and has its eroding effect on people, even when it doesn’t materialize. Eventually, there is the fistfight in the saloon and then the culminating shoot out, as violence bursts out into the open. And it takes its deadly toll before it is done.

Shot in color, the film portrays a sanitized though not prettified West. Location filming took place at the Bell Ranch, in the Santa Susana Mountains west of the San Fernando Valley in Los Angeles County. Its widescreen format has been reduced to standard ratio at netflix, but this seriously affects only one scene, in which two characters talk from opposite sides of the frame.

Economically told in 80 minutes, Face of a Fugitive is an engaging western with good performances and well-maintained suspense. The characters are believable, and it is full of the energy of a young director with a few fresh ideas about a long-established movie genre.