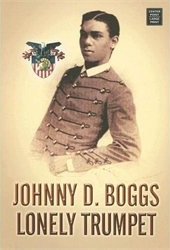 Often, it seems, the western is chiefly about inflicting and enduring pain. This historical novel by Spur Award winner Johnny Boggs is no exception. It tells of the short army career of the first black graduate of West Point in 1877, Henry O. Flipper. And it focuses on the court-martial at Fort Davis, in west Texas, that led to his dishonorable discharge in 1882.

Accused and eventually found not guilty on trumped-up charges of embezzlement, his chief fault was that he was a black man in an officer’s uniform. He had to go. The efforts of several fellow officers made sure that he did.

Reading stories of heroism, you wonder if you’ve got the kind of backbone it takes to act with such courage. During Flipper’s tenure at West Point and on the Indian-fighting frontier of West Texas, he confronted conditions that would have daunted the best of us.

Contempt for blacks was something he’d grown up with and learned to deflect. But being the only black among whites, most of them coldly hostile, he was often friendless and alone. Living daily in that kind of solitary confinement is an ordeal that would erode the confidence and fortitude of even the strongest person. Flipper somehow did it – until he was finally undone.


Lonely Trumpet is not the usual western novel. The pain inflicted and endured in it is not abstract or fictional but real, a matter of record. An honorable man and exemplary soldier, he was not just robbed of a career that he loved. He was robbed of a dream of equality that Emancipation had promised every American, black and white.

That the ill will of a few men could kill that dream is the sad lesson of this novel. Witnessing it, you watch a death more devastating than the western’s usual demise by gunfire.

Boggs handles this material masterfully, choosing well from the details that history provides and imagining the rest. He dramatizes the complexities of race relations by introducing a young white officer who extends a hand of friendship. But Wade Hampton becomes himself a casualty of the conspiracy against Flipper, with eventual revelations that are heart wrenching for both men, as well as the reader.

We live in a day when the armed forces have been desegregated for over half a century and an African American can rise in the military to the rank of general. It may seem that Henry Flipper’s story is only a dusty history lesson about racial prejudice. Yet the cover of the mass market paperback exhibits the residual effects of its legacy. It lacks the courage to be honest about the novel’s contents. 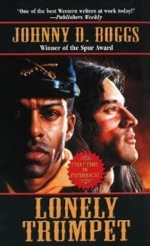 Yes, there is a handsome black face in a cavalry kepi, but behind him in profile is what seems to be a proud, defiant Indian brave. A book shopper can easily assume that the novel is about Indian fighting. In fact, an episode of Indian fighting takes up only a few pages of the novel, enough to show Flipper’s courage under fire. That’s it. There’s no Indian character to go with the one on the cover.

For readers, much of Lonely Trumpet turns out to be an absorbing courtroom drama. The protracted court-martial provides a battleground between the Judge Advocate, John Clous, and Flipper’s sharp defense attorney, Captain Merritt Barber. In alternating chapters we get an equal amount of back-story about the years leading up to it.

It’s also a personal story of courage and determination in the face of soul-grinding bigotry and contemptible conduct among self-professed “gentlemen.” It’s a walk in another man’s shoes with much to learn about both past and present. If westerns are stories about tests of character in the face of adversity, then this novel is as western as they come.