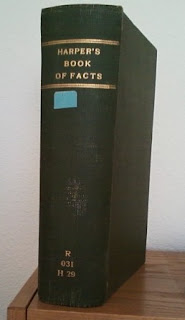 Warning: Truckload of facts ahead. This 115-year-old desk encyclopedia is a wonderment of information. I first stumbled upon it at googlebooks but found it hard to use there. So I shopped online and turned up a used copy in good condition at a reasonable price.  Thanks to the Queens Borough Public Library who gave it a home for who knows how long before discarding it. It has a new home now.

The book's full title is Harper’s Book of Facts: A Classified History of the World Embracing Science, Literature, and Art. Adapted from a British fact book, it has a transatlantic bias. But it’s full of facts and data that say a lot about what was considered worth knowing at the end of the nineteenth century.

What’s there (and what’s not there) makes for hours of both reading and reading between the lines. Here are a few items picked at random as they relate to the American West.

Cowboys and Indians. Cowboys get a single short paragraph. It begins with a factoid dating back to the Revolutionary War that was new to me. According to the book's editors, the term "cowboy" first applied to “British marauders and Tories who plundered the people east of the Hudson river, in New York, during the occupancy of New York city by the British, 1776-82.” This is followed by mention of “herdsmen on the ranches of the western states and territories.” That is all.

By comparison, Indians get five and a half pages of “facts.” A listing of tribes in the U.S. shows a total population of 249,273. Separate numbers are shown in Oklahoma for residents of Indian Territory, home of the five so-called civilized tribes (52,065), members of 17 other tribes, including Kiowa, Comanche, and Apache (8,708), and “colored populations and claimants” (14,224).

Under a heading “Indian civilization,” the acculturation of the American Indian is summed up in a paragraph of statistics. Out of a total of about 192,000 (excluding data for the five civilized tribes in Oklahoma and the New York tribes), the numbers from the Department of the Interior show the following:

Under a separate heading “reservations,” we learn that a total of 150,231 square miles are occupied by Indian reservations. The entry notes that area reserved for Indians is rapidly diminishing. As recently as 1880, there were 241,000 square miles of reservations. Just the facts, of course. There’s no comment as to whether this development is good, bad, or indifferent.

One of the most recent factoids in the history of the railroad in the U.S.: “Last spike in construction of the Great Northern’s extension to the Pacific, the 5th transcontinental line, driven, in the Cascade mountains. 6 Jan 1893.”

A certain Charles Francis Adams, Jr., writing in 1879, is quoted as having said that travel by train is sixty times safer than travel by the old-time stagecoach. There follows a lengthy listing of spectacular train wrecks. Most by far were in the eastern states. Listed are collisions, bridge collapses, derailments, and runaways, with numbers of casualties. Among those in western states:

Arizona. There’s an entry of some length for each of the states and territories in the Union. I’m taking Arizona as an example of what the compilers considered fact-worthy.

Politics and government. You get an idea of national demographics by looking at the descriptions of the political parties (Republican and Democratic) and the numbers of state representatives in Congress. First the two main parties in 1895:

Republican: Formed 1854, on the issue of opposition to slavery. Elected 5 presidents, including Lincoln and Grant. Advocated preservation of the Union, full payment of the national debt, free ballot, generous pension legislation, build up of navy and coastal defenses. Curious comment: “This party, while showing many able men, has never had a leader.” What was Lincoln?

A chart showing the 44 states electing representatives to Congress shows the vast influence of the populated East in governing the whole country. In 1893, of the 8 states admitted to the Union since the Civil War, only one (Nebraska) had more than two representatives in Washington. So the single congressman from Montana, for instance, was only one of a total of 356 lawmakers. How hard it must have been to be so far from the seat of power and so outnumbered.

Harper’s Book of Facts is available online free at google books and at AbeBooks.

Coming up: The Man From Laramie (1955)
Saturday Book Group review, Joseph Conrad's Heart of Darkness
Posted by Ron Scheer at 7:12 AM