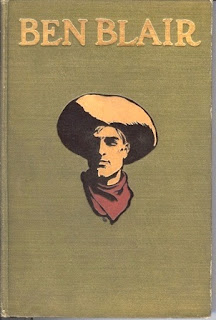 Here’s an early-early western with a familiar subject but a new angle. It argues that a man of unfortunate parentage can be a suitable mate for a woman above his social class. What makes him suitable is an inborn moral superiority and strength of character produced by living on the frontier.

Lillibridge gives it more of an “adult” angle by having his central character, Ben Blair, born out of wedlock. This single fact is so distasteful that the circumstances of his parentage are not even specifically revealed. You have to read between the lines.

Plot. The woman he loves is a childhood friend, Florence, from a neighboring ranch. Not only does she object to Ben’s being misbegotten. She is bored and yearns for the excitement of the city. She also has high hopes of finding a husband with an elevated social standing. So off she goes to New York.

Much of the second half of the novel involves Ben’s arrival in New York with his own hopes of changing her mind. A fish out of water in his hat, flannel shirt, and boots, he learns that she’s already being courted by a man of superior breeding and wealth. Yet as Ben’s prospects go from bad to worse, he is undaunted.

You already know how this turns out. On the last page, she finally relents, professing her love for him (despite his parentage), and she agrees to return with him to the frontier.

Back story. The first half of the novel is all back story to this. We know from the earliest scenes that Ben’s father is a hopeless drunk  and wastrel, as well as a wife and child abuser.  Ben’s mother dies of an undefined illness, and his old man abandons him, setting their one-room sod-house ablaze before he leaves. Surviving the fire, Ben is raised by a neighboring rancher, Rankin, an unmarried man who offers him the loving fathering that Ben has never known.

Twelve years pass, and Ben is now grown into a young “plainsman.” He is taciturn, stoic, and fearless, his moral superiority fully developed as compensation for the stigma of his birth. Standing for all that his father never was, Ben is a man whose actions are defined solely by responsibility.

The clarity of his thought comes through in his scenes with other characters. A conversation with him is a chess game – not with someone who uses words to manipulate but to cut straight to the heart of the matter. He says what he means and means what he says. And it doesn’t take many words to do that.

That’s appealing in a character, and we admire it in the laconic heroes that came later with western movies. Today, used to prevarication and half-truths in high places, we are likely to welcome it – even find it a little bracing.

East vs. West. This well-worn topic in early westerns gets a thorough dusting-off in this novel. Lillibridge sings praises to the wholesome living to be had on the prairie. His description of the arrival of spring is loving. Even winter cold offers a stark beauty.

By contrast, he has nothing good to say about city living. There, “countless thousands of human beings sweltered and struggled in desperate competition for daily bread.” Ordinary working folks are ground down by the daily routine and drag themselves in a kind of daze to and from their labors. The poor and immigrants live in crowded conditions, which discourage lawfulness and propriety.

Meanwhile, the well-to-do are enervated, shallow, and self-indulgent. Witnessing the idle pastimes of the leisure class, Ben is disturbed by their indifference to the welfare of the less fortunate. In the “democratic” West, he observes, the elderly and unfortunate are not shunned. People out there look after each other.

Women and romance. Florence Baker is not exactly a winning heroine. Spoiled by her indulgent father, she is heedlessly headstrong. While admirably independent, she lacks the maturity to know what’s in her best interest. When Ben shows up at her doorstep, she is not above being rude to him. Nonetheless, in his quiet, firm way, he simply lays siege to her attentions.

The head-scratcher is that Ben continues to like her and is determined to marry her. We know that her rejection has hurt him deeply, and her absence makes him ache with loneliness. But have her he must, and while a glimpse into his heart might clarify this puzzle, Lillibridge offers us hardly a peek.

What no one troubles to sort out is how the cold resolve of Ben Blair to have Florence for himself against all odds passes for anything like romantic intentions. That there are men like him isn’t in question. But how he ranks as marriage material certainly is. Admirable in so many respects, he’s a man’s man. It would take a trusting woman to expect any degree of conjugal warmth from him.

Wrapping up. Not just a character study, the novel has its share of excitement and suspense. One long sequence describes the tracking of a killer across the frozen prairie, first on horseback and then on foot. Another riveting scene has Ben attempting to stop a nasty lynch mob from hanging a prisoner.

William Otis Lillibridge (1877-1909) grew up in South Dakota. Trained as a dentist, he had a brief writing career that ended with a posthumous collection of short fiction, A Breath of Prairie and other stories (1910). One of his stories appeared in The Argosy in June 1903. Two of his novels, including Ben Blair, were made into films. The latter, made in 1916, starred Dustin Farnum, who had just previously completed lead roles in The Virginian and The Squaw Man.

Ben Blair: The Story of a Plainsman can currently be found at amazon

Image credits:
Illustration from first edition of the novel, by Maynard Dixon
Argosy cover from FictionMags Index
Others from Wikimedia Commons