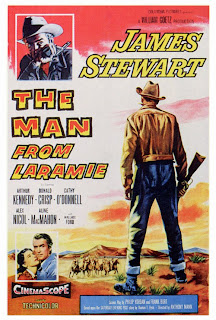 With a fiction genre that starts off with a novel set in Wyoming called The Virginian, there’s precedent enough for a movie set in New Mexico called The Man From Laramie. This fine 1950s western starring James Stewart makes excellent use of CinemaScope photography to tell a story about loyalty and betrayal.

Directed by Anthony Mann, the script is nicely realized and the cast is clearly in good hands. The pacing has been slowed down a bit to allow performances that seem naturalistic and characters that are more easily believable. Some sequences of soundtrack music add a haunting melancholy that brings out the isolation of the vast landscape.

The plot. The story is a familiar one. A tough old cattleman (Donald Crisp) has built an empire by driving out other ranchers. People live in fear of him, but as we get to know him – surprise – he’s not the mean bastard we expect. He’s still tough, but reasonable and fair, and he has some problems of his own.

The most obvious is his out-of-control only son and heir. Believing that he’s following his father’s example, he’s a belligerent and violent bully. Encountering Stewart and his men helping themselves to salt from a huge salt flat, he roughs up Stewart, burns his freight wagons, and shoots most of his mules.

The father has been relying on the foreman of the ranch (Arthur Kennedy) to groom his son to take over the operation. Meanwhile, Kennedy plans to marry the rancher’s niece and become part owner of the ranch. But he’s not family yet, and despite all he’s invested of himself over the years, his future is tenuous.

As often happens in westerns, when we get a glimpse inside a family with a big ranch, dysfunction is writ large. The old man has to learn the bitter truth about his offspring, and like King Lear make the most of one last chance to set his life straight.


Stewart. By refusing to simply go back to Laramie, where he came from, Stewart’s character becomes enmeshed in the family’s problems. There’s a price you pay for every choice you make, and he pays painfully by taking a pistol shot at close range through his right hand. Before it’s all over, the old man, his son, and his foreman all pay bitterly as well.

Stewart’s performance is closely similar to the westerner he’s played in other films. Always the fundamentally decent man, he is no pushover either. He can work up a head of righteous anger, easily holding his own in a shouting match with another man or throwing himself into a fierce fistfight. Then, in a scene with a pretty girl, he can just as easily get self-conscious and start fumbling for words.

Whites and nonwhites. The film actually takes the trouble to distinguish between two different tribes of Indians. Often spoken of but rarely seen are the Apache, who have almost everyone else living in dread of them. There are also Pueblo Indians, whom a kindly padre describes as historically peaceful people. They wear colorful blankets and seem to spend their time in or around the mission.

The casualties of the film are all whites. One of them, a marginal figure nicely played by Jack Elam, adds a spooky presence. His death becomes a plot point that puts Stewart behind bars under suspicion of murder. The other deaths come one after another as the chickens finally come home to roost.

A grizzled friend of Stewart’s (Wallace Ford) claims to be a half-breed (Irish and Indian), and seems to navigate the racial divide with a degree of philosophical ease. He shows up at moments to offer a seasoned perspective on Stewart’s own ruminations. It’s interesting that these non-action scenes, which could have easily been cut, were found important enough to stay in the movie.

Ford’s character is also an older, more comic version of Stewart’s – both are on their own and homeless in the world. Stewart is the “man from Laramie,” but as he explains early on, there’s no place he calls home.

Women. A deft turn in the script is to introduce an older woman (Aline MacMahon) with a ranch of her own. She’s also a tough customer, but with an appealing sense of humor. She tries to hire Stewart as a foreman, but he keeps saying he’s not looking for a job.

There are tentative gestures toward romance between Stewart and a girl who keeps a general store in town. And as time passes, he clearly turns her head. But he leaves her behind at the end without even a goodbye kiss. If you’re ever in Laramie, he says, look me up. Not too romantic.

The intent seems to be to point up his lonely journey through life. His mission accomplished, now on to the next one. However, we’re not left without a wedding at the end. That convention of westerns gets a nod as the old rancher is reunited with a girlfriend from his youth.

Wrapping up. This 1950s western holds up well, mostly because it was made with an unusual degree of intelligence. The location cinematography always keeps the eye well served. The sky is often used to reflect the mood of a scene – brightly sunny at one time and overcast in another.

Direction and editing have preserved a pace that permits more in-depth portrayals of character. Some deference is paid to historical accuracy. And the action sequences are inventive. A fistfight takes Stewart and Kennedy through the railings of a corral filled with cattle, and we see glimpses of the two men stirring up the dust, while the cattle mill around them.

The weakest link in the project is the performance of the rancher’s son. He is one-dimensional, a liar and whiner, and so viciously cruel he’s hard to believe. Jack Elam would have been such a better choice to bring out the character’s complexity. The Man From Laramie is based on a story by Thomas T. Flynn. It's currently available at netflix and amazon