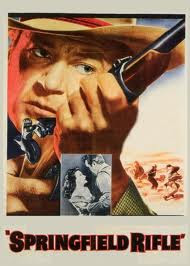 Best not to read a plot summary of this film before watching it, and allow yourself to be surprised by its unexpected turns. This is an unusual western with some but not many of the typical conventions. The setting is Colorado during the Civil War, and Gary Cooper plays a high-ranking Union cavalry officer in charge of delivering horses to the Union forces.

Southern sympathizers, however, lie in wait no matter what route the cavalry takes, and after a firefight they make off with every herd to sell to the Confederacy. Someone is leaking key information to the thieves, and the film is about finding out who and how.
After surrendering a herd of horses to the thieves without firing a shot, Cooper is court-martialed and given a dishonorable discharge for cowardice and dereliction of duty. We then follow him as he becomes involved with the gang stealing the horses.
The plot turns on a bit of wartime history, as it concerns the introduction of the breech-loaded Springfield rifle to the battlefield. (Hence, the title.) These replaced the musket-loaded weapons used during the early years of the war and substantially increased the firepower of the troops equipped with them.
Hungarian-émigré Andre de Toth directed this engaging and unconventional western. Born into a military family who disapproved of his career choices, he seems likely to have had some personal interest in this story. A subplot of the film concerns the impact of Cooper’s discharge on his wife and son.
Filmed in color, Springfield Rifle makes ample use of the outdoor settings, many shot in snow-covered mountain terrain. Always visually interesting, the frame is filled with things to see, whether close-ups of faces or the herds of running horses in long shot, gracefully moving across an undulating landscape. Instead of a straightforward punch-up, a fistfight in the snow involves spectacular rolling falls down the drifted slopes.
Cooper is at his best as a complex character whose motivations are not easy to assess. There’s quite a large cast of characters, including brief appearances by Martin Milner and Fess Parker, who would become more familiar in TV roles. Lon Chaney, Jr., gets plenty of screen time as a mug-faced leader of the gang of horse thieves.
Coming as it does during the years of the Hollywood blacklists and the Korean War, it’s a curious depiction of the U.S. military. Compared to John Ford’s worshipful portrayals of the cavalry, this film is darker and less reassuring. Springfield Rifle is currently available at amazon

and streamable at netflix.
Image credit: Wikimedia Commons
Coming up: Harper's Book of Facts (1895)
Posted by Ron Scheer at 7:09 AM