This may seem like a stretch, but the early western novel is more than a little about crime and criminals. I’m talking here specifically about the flood of novels that followed the huge popular success of Owen Wister’s The Virginian (1902).

The scores of writers of these westerns are unknown today except for Zane Grey. Most of them (again, with the exception of Grey) are as good as Wister. Many had long careers in the pulps and in hard cover, their stories often made into Hollywood films.

The essential themes of the western are on full display in The Virginian, and that includes an interest in the criminal mind. Wister’s imitators followed suit, inventing the genre as they went. So let’s start with Wister.

Trampas, the villain of the novel, qualifies on many counts as a sociopath. The historical West had its share of misfits, which is often how they got on the frontier in the first place. And Wister, writing from first-hand knowledge, didn’t have to dream up this bad guy. 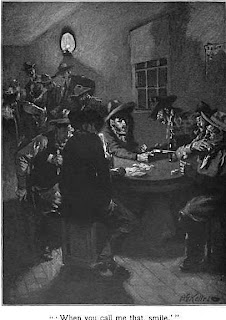 Trampas is a cauldron of barely contained rage. Meanwhile, he can competently hold down a job as a cowboy – not an easy occupation. Still, engaged in a continuing battle of wits with our hero, the Virginian, he carefully avoids open conflict. He backs down when challenged with "When you call me that, smile" [Illustration at left].

Wister, Harvard-educated and from a prominent Philadelphia family, is curious about what makes such a man. In the characters of Steve and Shorty, he shows how two men are corrupted by their association with Trampas.

Both descend into thievery out of weakness of character, stealing horses and rustling cattle instead of working at an honest living. Steve, though he’s the Virginian’s long-time friend, is captured and hanged. Shorty could make a career of handling horses, which he has a gift for, but he's lured by Trampas' promises of easy money. Trampas then shoots him dead as the two men flee from the vigilantes, but with a single horse between them [Illustration below].

So far, the story has two elements that make it a western on the one hand and crime fiction on the other. It’s a western because it takes place on the “lawless” frontier. I put that word in quotes because there were in fact two kinds of law out there: duly constituted and something called the code of the West. 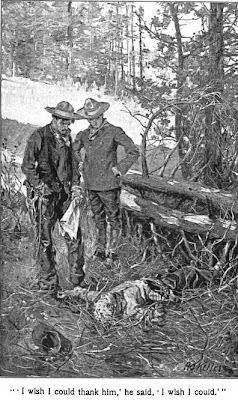 Duly constituted authority were the sheriffs and federal marshals based in widely scattered settlements hundreds of miles apart. These men were too few and far between to enforce the law outside their immediate vicinity. Even so, a jailed prisoner awaiting trial might easily be dragged off by a lynch mob and never get the benefit of appearing before a judge and jury.

The code of the West was a loose, unwritten agreement among men of good will to respect each other’s rights to life and property. This agreement was self-enforced by widespread ownership of firearms. Where it was believed necessary, private citizens organized as vigilantes and went after malefactors on their own. Or they hired “detectives” to do the job for them.

What constituted crime on the frontier was typically thievery, resulting in hanging. While many were injured and died of gunshot wounds, these were almost always matters of self-defense and not considered worthy of a trial. For a punishable offence, the victim had to have been unarmed or even just unwarned, i.e., ambushed. 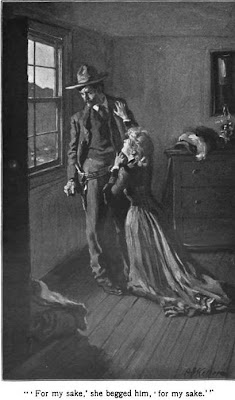 Likewise, if two private citizens decided to settle a disagreement with guns, as the Virginian and Trampas do at the end of the novel, that’s entirely up to them. Whoever survives will have been lawfully defending himself.

So the early western operates in an imaginative world with its own understanding of crime and criminals. Yet there is plenty of both that must be dealt with by men whose job it is to stop them.

Thus, writing for an Eastern (supposedly more civilized) audience, Wister takes pains to justify the matter of vigilante justice in his novel. Molly the schoolmarm from Vermont is horrified to learn that her cowboy sweetheart has been a vigilante, and it puts the skids to their romance for a while. Then, on the night before their wedding, she pleads with him not to confront Trampas in the final showdown [Illustration above]. It’s a western, so she loses on both counts.

Finally, Wister never seems to understand what goes into the making of a villain like Trampas. Unlike Steve and Shorty, he is criminal to the core. This, to me, is part of the fascination of crime fiction, and it’s where it overlaps as a genre with the western.

Each in its own way takes the reader on a journey into the heart of malevolence, around which there remains always an unsolved mystery. You can kill off Trampas, but there he is again in the next western you pick up. And the struggle to locate and neutralize him begins anew.

The Virginian is currently available free online at google books. Also at amazon

, AbeBooks, alibris, and for the Nook.


Image credits: Cover, American Heritage Center, University of Wyoming
Illustrations from the first edition of the novel by Arthur I. Keller