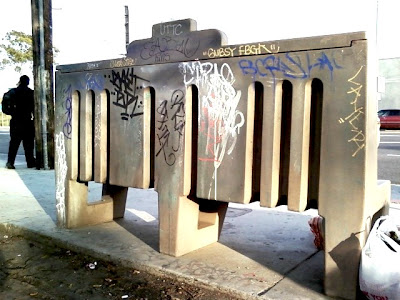 This is our last Friday in West LA and the second to last hello-goodbye. I snapped this not long ago while waiting for the No. 1 Culver City bus (Fairfax to Venice). It's the back of a bus stop bench, decorated to a fare-the-well by taggers. I would translate if I could, but I don't know the lingo.

Travel by bus in LA is probably like nowhere else in the world. About the only thing you can confidently say about bus passengers is that they are never from Beverly Hills. After that, there are a million and one different stories, one for every person who's ever had to get somewhere without a car.

Ear plugs are handy most hours of the day. Besides people yakking on cell phones, there's in-transit TV, ear-piercing beeping each time the front entry platform gets lowered and raised for folks in wheelchairs, and the automated recordings before, during, and after every stop: "Stop requested; please use rear exit"; "Approaching Sepulveda Boulevard and Santa Monica Boulevard"; "Please have fare ready."

The cheerfully pleading tone of that last one always put my teeth on edge. And riders forever shunned the rear exit in favor of walking back to the front, to block the way for any passengers getting on.

But if you ignore all that and pay attention, you can witness things that are rife with human comedy (and the occasional melodrama). Like the guy across the aisle from me once who tried talking to the guy behind me, who was having one of those off-his-meds one-sided conversations. And he just kept on talking to himself, until the first guy got angry and finally said, "How come you'll talk to somebody who isn't there, but you won't talk to me?"

I will miss those moments. . . but not much else.

Photo-finish Friday is the bright idea of Leah Utas over at The Goat's Lunch Pail.
Posted by Ron Scheer at 7:31 AM