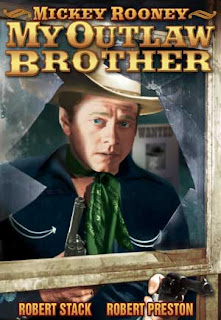 I’d call this a A/B-western, since it runs 82 minutes and features a cast not known for cowboy roles. There are no singing cowboys and not an over-reliance on gunplay, fistfights and chases on horseback. For all its contrivances, it tries hard to make them believable. The conventions are offset by a script that doesn’t lose sight of its source material, Max Brand’s excellent South of Rio Grande.

The film starts literally with a bang, as a gang of robbers blows open the front door of a bank and then comes streaming out with bags of money and rides off out of town firing their guns. After that, it settles down to portray the meeting and growing friendship between its odd-couple main characters, played by Mickey Rooney and Robert Preston.

Rooney plays a young tenderfoot in the West, looking for a long absent older brother in Mexico. Preston is a Texas lawman sent south of the border in search of a vicious bandit known as El Tigre. When they find him, the brother (Robert Stack) turns out to be a member of El Tigre’s operation.

Much of the movie takes place in about 24 hours, with many scenes played out in the darkened streets and houses of the town. The noir lighting builds tension as danger lurks in the shadows. After the crashing overture during the credits, there is not the usual overbearing use of music in the film. A series of scenes can go by without a single note audible in the background.

While the rest of the movie is played straight, Rooney’s performance leans toward the comic. He often goes for the humor in his scenes, even joking about his height. Preston turns in a fine performance as a capable lawman with an amiable manner and the patience to take the inexperienced Rooney under his wing. He’s a strong physical presence next to the short, squat figure of his companion. Oh, yes, there's a marriageable girl (Wanda Hendrix) ready to throw in her lot with the two men - and the joke is that she's not taller than Rooney.

Interiors for the film were shot at studios in Mexico City, and Mexican actors seem to occupy the supporting roles. The best is veteran actor José Torvay, with a long list of Spanish- and English-language screen credits from 1938-1973. Here he plays a blacksmith, whose son was killed by El Tigre, and who comes to Rooney and Preston’s aid.

Director Elliott Nugent was a New York stage actor who had a long career in Hollywood as actor and director until this his last film. He also appears in its opening scene as a captain in the Texas rangers. After some TV work in the mid-1950s, he retired and has a tell-all autobiography, Events Leading Up to the Comedy, that sounds like it could be fun.

My Outlaw Brother is currently available at amazon

and free online at Internet Archive.