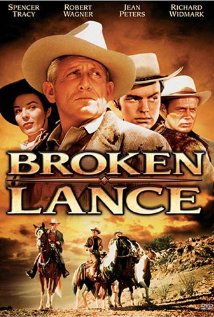 If for no other reason, this 1950s western is worth seeing for Spencer Tracy’s performance. He plays an aging Arizona cattleman who built an empire, using a six-gun and his own style of justice to preserve it. Now those days are over.

Not only do folks prefer due process in settling disputes, but three of his four grown sons are giving him troubles. They resent the old man’s rough fathering, and the oldest (Richard Widmark) has ideas about modernizing the family’s operation. They also hate him for the affection he gives to his youngest son, Joe (Robert Wagner).

A twist in the plot is that Joe is a half-breed. The boys’ father married the daughter of an Indian chief after the death of his first wife. This may have been common in the time of the frontier, but not anymore. Joe’s mixed parentage also makes him unacceptable marriage material by the father of the girl he’s fallen for (Jean Peters).

Plot. The film is about the fall of a patriarch. His fortunes turn after some of his old-style intimidation of those who cross him get him dragged into court. A copper mining outfit sues him for damages over a disagreement about use of water rights. The older sons reject the settlement deal and Joe ends up spending three years in prison.

Struck down by a stroke, the old man spends his last days in the care of his wife (Katy Jurado), while the older sons do what they want with the ranch. Out of prison, Joe has scores to settle with his three brothers. Their differences are finally resolved with the assistance of an Indian employee of the ranch.

Indians. Broken Lance comes at a time when the Hollywood stereotype of the bloodthirsty savage Indian was changing. The film makes a point of dignifying them, though only as pacified members of a subdued race. Prejudice against them and objecting to intermarriage are regarded by the film as narrow-minded, if not racist.

Like the Lone Ranger's Tonto, however, their function is to be faithful retainers. They come to the aid of Spencer when he's outnumbered by the angry copper mine workers. They show up at his funeral to play their drums in respect for the departed. The appearance of a wolf at points in the film suggests the continuing of animist culture and traditions somewhere off camera. But for Hollywood, it’s Indian lite.

Performances. Robert Wagner is a bland presence in the film. He seems to remember his lines but delivers them with a flatness that always makes me wonder about his appeal. Spencer Tracy, on the other hand, fully inhabits his role. He commands every scene he is in, whether scolding the plaintiff’s attorney from the witness stand or trying to dissuade his oldest son from selling off part of the ranch.

This latter scene with Widmark is played out in a single five-minute take, each man on one side of the CinemaScope frame. Spencer is sitting, recuperating from a stroke; Widmark stands, declining to take a seat and fiddling with a leather glove. The pacing, performances, and delivery are a simple yet masterful portrayal of the shifting dynamic between the two characters.

In secondary roles are Hugh O’Brian and Earl Holliman as the two other brothers. O’Brian, who had not yet gained fame as TV’s Bat Masterson, seems always to fade into the background, probably for that reason. The talent least appreciated in the film is Mexican actress Katy Jurado, playing a Native American. The script provides her with few lines, and she’s rarely given more to do than offer a worried look when there’s something to be worried about.

Credit is due to the stuntmen for some breathtaking stunt work near the end of the film as one character pursues another over a rocky terrain. Both take long dives into a stagnant pool of water that seems surely to harbor brain-dashing boulders under the surface. Also, the costumers get a nod from me for Tracy's LBJ-style Stetson. It's perfect for him.

Wrapping up. According to imdb.com, director Edward Dmytryk had an abusive father and left home at an early age. You wonder how much of this finds its way into the complexity of Spencer’s character. The man is likable but capable of violent outrages against his older sons. That he has alienated them is his own fault, and their grievances are clearly justified.

A member of the Communist Party briefly during WWII, Dmytryk ended up doing time for refusing to comply with the HUAC hearings. Later, agreeing to name names, he resumed what became a long directing career in Hollywood, though like Elia Kazan, he lost friends as a result of the whole blacklisting ordeal.

Writer Philip Yordan won an Oscar for Broken Lance. He was still early in a substantial screenwriting career with memorable films like Detective Story, The Bravados, Day of the Outlaw, and The Man From Laramie (reviewed here last week). Ironically, his credits show him to be a “front” for a blacklisted screenwriter during the 1950s.

It was a crummy time for creative people in Hollywood, and it’s not difficult to see Dmytryk trying to lay to rest his own past in this film. Joe, having served time in prison comes out full of resentment for his brothers who betrayed him and his father. But as a final gesture, he takes the Indian lance planted in the ground next to his father’s grave and breaks it across his knee. He is done fighting.

Coming up: Johnny Boggs, Broken Trumpet
Posted by Ron Scheer at 6:23 AM