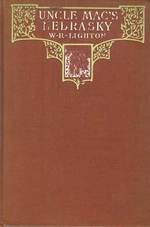 William Rheem Lighton (1866-1923) grew up, as one source says, “mostly in Nebraska” during the early decades of statehood. He appears as himself in this novel, though only as the “Billy” to whom the Uncle Mac of the title tells his tales. These all occur in the 1850s and 60s around Omaha and along the Platte valley.

A young man given to adventuring and little thought of risk, Mac gets himself involved with horse thieves, Indians, homesteaders, and even John Brown and the Underground Railway. He works for a time as a freighter between Omaha and San Francisco. During the war between the states, he spends some time in the U.S. Cavalry, escorting prairie travelers and providing protection from the Sioux.

The book is a character sketch of a man remembering the good old days. Each chapter is a different episode or collection of them. What they add up to is his main argument, that the pioneers in the territory did just fine without “civilization.” They were basically trustworthy, self-sufficient folk who didn’t need rules and laws to run their lives.

Code of the West. Mac himself is a living example of that breed, “staunch, fearless, strong, steadfast.” Being a man of the outdoors has made him healthy in body and mind. Whether in a fistfight or giving a man the coat off his back, “the need of the occasion is his sole guide in conduct.” Desiring neither wealth nor power, he has lived “for the pure joy of life itself.”

Like Will Rogers, he seems never to have met a man he didn’t like. People are mixtures of good and bad, he says, which seems to be what the good Lord intended. Even a horse thief has a “native sense of integrity.” His first story is about being deputized to bring in a half-deadbeat by the name of Turk Wesley, who’s been running off horses from the local Pawnee.

Mac gets his man but is unlucky enough to get shot in an exchange of gunfire with the Indians. Honoring the code of the West without a second thought, Turk takes the wounded Mac to a settlement where there’s a doctor. Problem is, Turk has been thieving from the folks there, too, so he knows he’s taking a big risk. When Mac recovers weeks later, he learns that the residents have caught Turk and he’s met his end. A “born fool,” Mac says, but not without integrity.

Indians. The Pawnee and Sioux figure in most of the stories. Mac has a predictable opinion of them. They are “treacherous and ornery,” but they don’t forget a good deed. When Mac helps a young Sioux with a broken leg get back to his camp, he is remembered years later and welcomed when he stumbles onto the same group of Indians.

Treated like royalty, he is taken into the tribe with a feast and gifts. Then he finds himself being gifted with a pretty Sioux maiden as a wife. Big Eye, he calls her, after the two of them have indulged in a little idle flirtation. She’s French-Indian he concludes, since she seems to be a half-breed, and he’s more than a little taken with her.

Mac can’t tell if the Indians are serious or having a joke at his expense. So, he doesn’t know how to extract himself from the situation without seeming unprincipled as a “billy goat.” Finally, when the whole affair has gone on long enough, he leaves the camp with a promise to return. Years later, long married to another woman, he regrets not sticking around for what might have been.

Women. In one episode Mac meets a young waitress named Sally, who offers a stark portrayal of a woman’s life on the prairie. Sally blithely marries an immigrant settler, who takes her out to his sod-house and then mistreats her.

When Mac finds her again, she is digging a grave for her dead baby. The settler has left her without food or firewood. She and her young daughter are cold and hungry. Rescuing the two of them, Mac encounters the settler who is returning home. Holding the man at gunpoint, he coaxes Sally to slap him hard and box his ears, which requires little encouragement for her.

Later, he finds her in town wearing widow’s black as she goes about her new life. Is the settler dead, Mac wants to know. No, she says, it just feels good dressing like he is.

Wrapping up. When he wrote this novel, Lighton was just getting started on a literary career. In the seven years previous, he’d published seven stories and one serial in various magazines. In a couple years, he’d create a character, Billy Fortune, who would have a long run of stories in Saturday Evening Post plus a movie called Water, Water, Everywhere (1920), with Will Rogers as Billy.

Uncle Mac’s Nebrasky stands as an early sample of its author’s writing career. In this novel we see a gift for storytelling, with a mix of humor and grit that is grounded in experience of the frontier. It is currently available free online at google books. It’s also at amazon

, AbeBooks, alibris and for the Nook.

Coming up: Peter Brown, western photographer
Posted by Ron Scheer at 6:00 AM