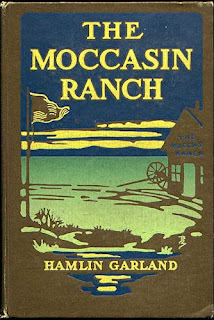 This novella by Hamlin Garland (1860-1940) is about a handful of first-year homesteaders on the wide-open Great Plains of Dakota. It has two stories to tell. One, the impact of elements of nature on the well being of early settlers. The other, the questionable relevance on the frontier of conventional morality.

Plot. Arriving in the spring of 1883, the new arrivals stake out their claims on the flat, treeless prairie. Everything about this unbroken land lifts their spirits and fills them with hope for a bright future. They throw up one-room cabins for shelter and begin to make improvements that will give them rights to ownership of their holdings.

As the year progresses, however, their tentative grip on a spot of land becomes more doubtful. First there is drought, then there’s a massive and terrifying storm. Finally winter weather sets in and they are isolated by blizzards that threaten them and their livestock with starvation and death by freezing.

A couple at the center of the story, the Burkes, do not weather well under these conditions. She develops an attachment to another man, Rivers, the agent who has led them to their claim and delivers mail from town. He is something of a ladies man and enjoys the idle flirtation.

With the arrival of winter snows, she despairs in the isolation of a drafty cabin, the wind howling day and night outside. Adding to her dismay is the discovery that she is pregnant. Throwing herself at the mercy of Rivers, she begs him to take her away.

Knowing already that he would have wooed her were it not for her marriage, Rivers puts her into his wagon. Together they brave the snow and cold with intentions to leave the country forever.

East vs. West. As a western story, The Moccasin Ranch finds its own way of pushing the limits of Eastern propriety. The weather forces the fleeing couple to stay overnight at the cabin of Rivers’ partner, Bailey, who instantly objects to the couple’s betrayal of her marriage vows. With his well-conditioned ideas of morality, he regards Rivers’ behavior as “lustful” and Mrs. Burke as “wanton,” and he tries to prevent them from going through with their plan.

While the three of them are snowbound in the cabin, Bailey tries to pass the time by reading aloud stories from magazines. Ironically, some are love stories about “innocent creatures” who overcome obstacles to find “bliss” in each other’s arms. Rivers and Mrs. Burke, alas, don’t qualify as innocent.

Then, the magnitude and indifference of the storm outside makes Bailey realize that on the frontier they do not inhabit a world of conventional values. The deep caring he sees between the two lovers surprises and touches him. He comes to see that it surpasses the man-made requirements of a marriage contract. The following day, they depart with his blessing.

Women. How this went down with readers in 1909 makes an interesting question. It hinges surely on how progressive were their beliefs about women’s rights. It’s maybe no coincidence that of the four states granting women’s suffrage by the turn of the last century, all of them were in the West (Idaho, Colorado, Utah, and Wyoming).

And in this case, Mrs. Burke doesn’t even need to claim that her husband was unfaithful or beat her. Burke is in fact a fine husband. It’s enough that she has finally found the man she would have married if she’d met him first. The love of true hearts is enough to free a woman from a marriage vow. Period.

Landscape. There’s some irony in the title of The Moccasin Ranch. It’s the name the Burkes give to their modest acreage, and it reflects their aspirations. It’s also in keeping with how they relate immediately to the land, thrilled and made hopeful by its beauty. There “the majesty of God’s wilderness” even affects the quality of folks' social relations. Neighbors mix freely regardless of origin or gender (with the exception of some clannish Alsatians). Gone are “envy and hate and suspicion.”

By November, however, after living for months on canned beans and crackers, the new residents are growing weary. The plain has become an “oppressive weight,” and the land is “gray and sad.” As winter approaches, it becomes a “menacing desert, hard as iron, pitiless as ice.” The wind, once a solace, becomes savage and unrelenting.

Wrapping up. The Moccasin Ranch is from Garland’s middle years as a writer. He’d already established himself with a collection of stories, Main-Traveled Roads (1891). These stories drew on his experience of growing up in rural communities in what is now known as the Midwest. Over the following two decades he published up to 50 fiction and nonfiction pieces. Many are set in the West, and most of them appeared in Saturday Evening Post and McClure’s. Though he spent his last years in Los Angeles, only two of his novels were made into films, both of them silent.

The anti-romanticism of The Moccasin Ranch no doubt reflects Garland’s early years on the rural frontier. Willa Cather knew it too from her girlhood in Nebraska. According to Garland, the frontier is a test of both fortitude and personal circumstances. Some thrive, some don’t. More than will power, the heart can make all the difference.

The Moccasin Ranch can be found free online at googlebooks and Project Gutenberg. It is also available at amazon

and for the Nook.

Coming up: Western photographer, Peter Brown
Posted by Ron Scheer at 6:34 AM