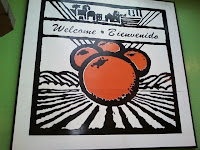 Almost 100 years old, this covered market in downtown LA has been in business since 1917. Between Broadway and Hill Street, it's located at the foot of Bunker Hill, once a high-end residential district, with its own funicular, Angels Flight, so-called shortest railway in the world. Bunker Hill is now the home of a cluster of soaring office buildings and the city's cultural center.

The market bustles with produce stalls, Mexican and Central American imports, eating places with counter service, even a Chinese massage. Bright daylight filters in from the streets outside, and in the half-light of the huge enclosed space, under a high ceiling, there are brightly colored neon signs and sawdust on the floor.  Here's what it all looked like on a morning in January 2012.