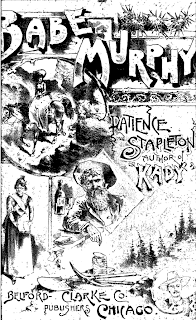 This is a sentimental novel set in the West that’s a blend of romance, morality tale, and murder mystery. The narrator is a fifty-year-old woman from New England, Lydia Wilder, who falls into a small inheritance and goes adventuring. She fetches up first in a Colorado mining town, where she befriends the young, independent woman of the title, Beatrice “Babe” Murphy.

A third woman, Clara Beach, provides the novel’s romantic melodrama. Unhappily married, she becomes involved in an adulterous love affair. If Douglas Sirk had been making movies at the time, this story would have fallen squarely in his ballpark. There would be roles for Jane Wyman and Rock Hudson.
Issues. Like Sirk, Stapleton uses this material to raise all manner of questions about expected social roles and limited opportunities for women. Smothered by her husband’s Victorian-era desire to preserve her “innocence,” Clara is trapped and isolated in her marriage. Finding true love in the arms of another man, she must bear the judgment of those who regard her as a wanton, fallen woman.
Were the story set in New England, we could expect something like scarlet-letter morality to run its course, but out here in Colorado, things are different. In a mining camp especially, there’s a bit more elbow room for the wanton and the forbidden. Even the surrounding mountains seem indifferent to the indiscretions of humans.
Lydia’s New England upbringing keeps reminding her that Clara’s infidelity is wrong, yet she reluctantly becomes an accomplice. She may refuse to carry messages between the two lovers, but she can’t help but be touched by Clara’s dilemma. A complicating factor is that Clara’s lover is Babe’s father, Con Murphy.
Another is that Clara’s husband became wealthy by scheming to gain ownership of Con’s silver mine. Taking his wife, Con reasons, is fair repayment. And there’s yet one further complication—Clara’s dashing young cousin Tom arrives from the East and begins to court Babe. Before long, the two couples are having idyllic picnics in the woods, with Lydia as something of a guilty chaperone.
Plot. The crisis point for Clara comes when her husband learns of her affair. She and Con then disappear, having run off together. Her husband is not only shocked and bereaved. He turns up dead, the apparent victim of foul play.
Suspicion turns to Con, who would have more than enough in the way of motive, but a grand jury decides they lack sufficient evidence to charge him. Lydia and Babe leave Colorado and eventually find the two lovers in Corpus Christi, Texas.
Con, exhausted and in poor health, lies on his deathbed, attended by the stricken Clara, who reveals how her husband was killed—not suicide or murder, but an accident. When Con is dead and buried, she leaves, a shattered woman, and we never see her again. At which point the story turns to its other plot, Tom’s courtship and eventual marriage to Babe.
Tone. Though the novel has a happy ending, there are numerous shadows in the telling of its story. Loneliness, loss, and death are frequent themes. These are expressed partly in the restrictive conditions of the remote mining camp. The mountains themselves are a wall that separates Lydia from a more hospitable terrain. She misses the ocean, and she much admires the prairies and flatland of Texas, where a person can see the horizon.
In the carpe-diem ruminations of characters, there’s also an awareness of the brevity of life, the emptiness of social forms, and the few pleasures granted to the living. When all is said and done, Con argues, we are just skeletons and dust. After death, there’s no difference between rich and poor, moral and immoral.
Character. What is the test of character for a woman? Through her narrator, Stapleton seems to say that it’s the courage to leave the domestic security of hearth and home and venture into the world. In both Lydia and Babe, she argues for a kind of gender equality that allows women freedom of movement and full exercise of their intelligence.
She laments how social restrictions keep women dependent on men, and she blames women themselves for colluding in that practice. Finding herself in an unhappy marriage, Clara seems as much the victim of her mother’s intentions as she is her husband’s. Prepared for nothing else, however, she has no resources for striking out on her own. And marrying Con would mean life as a poor miner’s wife—not much of an option either.
Her fault is one of weakness, a lack of moral strength to do the right thing—starting with being honest with herself and her husband about her unhappiness. Instead she uses her cleverness to excuse the doing of the wrong thing—lying and cheating on him. Given the circumstances, her behavior is understandable, but not excusable. At the end of the novel, we learn that the rest of her life has been a misery, and she yearns only to be dead and buried next to the man she loved.
Wrapping up. Patience Stapleton (1861-1893), like her narrator Lydia, came to Colorado from Maine. She wrote for the Denver Tribune and married an editor of the Rocky Mountain News. Writer of numerous short stories, she published one other novel set in Colorado, Kady (1888).
Babe Murphy is currently available at google books and Internet Archive, and for the nook. Friday’s Forgotten Books is the bright idea of Patti Abbott over at pattinase.
Photo credits: Wikimedia Commons
Coming up: Marah Ellis Ryan, Told in the Hills (1891)