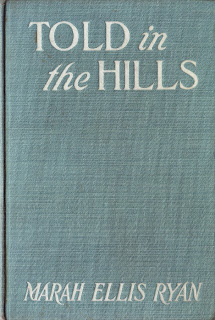 There’s a bit of Charles Dickens in this story of long-held secrets ending with a cascade of deathbed revelations. In its study of white-Indian relations on the frontier, it is also a critique of racial prejudice. As a study in character, its hero and heroine portray a stubborn independence and loyalty to higher ideals that put them at odds with their social equals.

The hills of the title are the ranges to be found on the western slope of the Continental Divide in Montana, where a handful of whites have settled amongst Native American tribes. We are in the verdant valleys somewhere north of Fort Owen and near what is now Missoula.
Plot. Arriving in the West as a visitor, the central character is Rachel Hardy. On a packing trip into the mountains, she is fascinated by the taciturn scout Jack Genesee, a white prospector and mountain man. He has befriended the local Indians and has close ties with them, having been adopted into the Kootenai tribe. He introduces Rachel to Chinook, the language spoken by the Indians.
Ruggedly handsome, Genesee reveals little of himself to her, and seems to prefer being a man of mystery. Their friendship abruptly deepens when he rescues her after her runaway horse leaves her afoot and lost in the woods.
Rachel, her sheep-rancher brother, and his wife, welcome Genesee into their midst until they learn that he is a squaw man—a white man who has taken an Indian woman as a “wife.” Having crossed a racial boundary, he has made himself according to custom unfit for the company of respectable women. Rachel, however, is not so quick to judge.
He disappears for a long while, scouting with the U.S. cavalry. During his absence, another Easterner arrives, Charles Stuart, whose presence in the West is not fully explained. Gradually we begin to suspect that he is the long-estranged younger brother of Genesee. Although Rachel and the rest of the Hardys are charmed by him, they do not know that he has a guilty past.
Matters become complicated and tensions heighten when a regiment of cavalry camp near the Hardys’ ranch. The theft of half the camp’s horses is assumed to be the work of the Kootenai, and suspicion falls on Genesee who is their ally. He is taken prisoner and hostilities break out with the Kootenai when the chief’s son is shot dead by a cavalryman. Forty of the soldiers wind up trapped by the Kootenai in a ravine and facing certain death.
In repayment for having twice rescued her from death by exposure in the woods, Rachel daringly frees Genesee, who comes to the aid of the cavalry by leading them through an ancient silver mine. Recovering the body of the chief’s son, Genesee returns it to the Indians, where he is mortally wounded. He then dies with Rachel, Stuart, and the Kootenai at his bedside.
Women. Ryan’s heroine, Rachel, exhibits a tough-minded independence that keeps her aloof from the petty prejudices of the other women. She also often defies the men who are committed to protecting her from harsh frontier realities. None of them comprehends the ease with which she befriends and converses with the Kootenai.
Regarded as a little “queer” even as a girl back home, she is content to make her own sense of the world, a trait that does not change now that she is on the frontier. She admires the strength and intelligence of the man Genesee, though she does not fully understand him. When she learns that he is a squaw man, she resists the urge to condemn him, and takes the attitude that to know all is to forgive all.
Her sister-in-law Tillie is more deeply conditioned to follow the dictates of her social peers. While she was first enchanted by Genesee’s presence in her home, she cannot forgive him for allowing them to assume that he is of equal social standing. Being a squaw man marks him with an indelible stigma.
Romance. Early westerns without a romance subplot are rare, but this is one of them. While you expect romance to bloom in some way between Rachel and Genesee, they never become more than respectful friends.
There’s a bit of Charlotte Bronte’s Rochester in Genesee’s mysterious reserve, the lonely, alienated man wounded by misfortunes of the heart. While he may fall in love with Rachel, we are only left to surmise, for there are hardly more than brief glimpses of his emotions. At one point near the end, he finally kisses her, elated with gratitude for her continued faith in him.
It’s a tragic romance. Lovers meet but are prevented by circumstances, morality, and social customs from acknowledging that love. It’s interesting that Rachel’s surname is Hardy, because there is more than a little Thomas Hardy in the way Genesee is deprived of a fully rewarding life. Even his brother Stuart sadly observes that his life has been “one immense sacrifice—and no compensations—one terrible isolation.”
Character. While Genesee is a physically powerful man, the strength that Ryan celebrates in him is his moral courage. His acts of compassion and sacrifice come at great cost and are the cause of considerable loss. The squaw Talapa originally came into his life as a woman he rescued from beating by another Indian. He did not acquire her as a “wife,” like other squaw men. But rescuing her made him one of them.
Macdougall, a friend of Genesee, remarks after his death that his life was wasted. His kindness to an Indian woman won him the disrespect of other whites. Rachel disagrees, seeing in the man a Christ-like generosity. “He is not the first lion who has died to feed dogs,” she says. 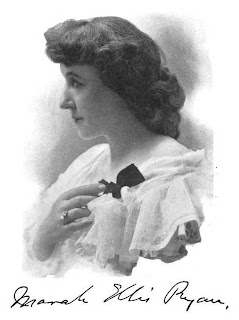 Wrapping up. Marah Ellis Ryan (1860-1934) was a prolific novelist during her lifetime. She developed an ongoing interest in Native Americans and seems to have been regarded as an authority. Her novel is unusual for its attempt to present white-Indian relations with a degree of candor that would not have been widely accepted among many readers.
It also takes on the potentially sensational subject of crossing racial boundaries. While stopping somewhat short of advocating mixed race marriage, the novel presents a clearly sympathetic portrait of a white man who has taken an Indian wife.
Told in the Hills is currently available at google books, Internet Archive, Project Gutenberg, and for kindle and the nook. Friday’s Forgotten Books is the bright idea of Patti Abbott over at pattinase.
Illustrations: Stanley L. Wood