Commentary: Family values in the western 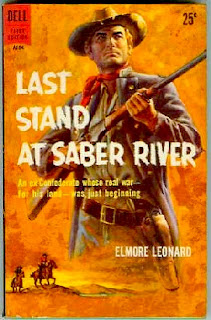 Two westerns have been on my mind lately: Elmore Leonard’s Last Stand at Saber River (1959) and Louis L’Amour’s The Quick and the Dead (1973). Add to that another, Jack Schaefer’s Shane (1949). All of them concern small nuclear families on the frontier that are being menaced by villains.

In Schaefer’s Wyoming, the villain is a cattle baron who simply wants settlers off his open range. The mysterious stranger Shane, takes up residence with a settler family, the Starretts, then defends them by killing the cattleman’s hired gunslinger. The story is told by a boy, who has only a boy’s understanding of conflict and danger, so the violence is muted.
A decade later, Leonard’s novel, set in Arizona, whittles this story down to a long confrontation between a settler and a whole family of villains. Civil War veteran, Cable, has been off fighting for the Confederacy. After being wounded several times, he is sent home. There he finds that Union sympathizers have taken over his house and pastures. He has to evict them by force in chapter 1, and for the rest of the novel he must defend family and property. It’s kill or be killed.
L’Amour blends these two stories and sets his short novel in Colorado, where his family, the McKaskels, is protected from a nasty gang of villains by a Shane-like frontiersman and gunman, Con Vallian. The atmosphere from the start is another one of kill or be killed. While the killing in Shane takes place at a saloon in town, Leonard and L’Amour bring it right to the family’s doorstep.
Fiction, including westerns, is a product of the time when it was written. And put in chronological order, from 1949 to 1973, these three westerns make an interesting progression. While the central situation is the same—family vs. menacing villains—the escalation of violence from Schaefer to L’Amour is notable. 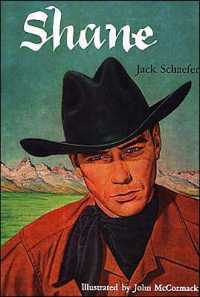 Shane. I have come to read Shane as a postwar story in tune with the reentry of WWII soldiers to the homeland. Trained to kill, many of them survivors of fierce combat, these returning veterans were not all successful making the transition to peacetime. We know now from modern psychology, especially after Vietnam and with wars in the Middle East, that the stress of life-and-death conditions can be traumatizing.
Shane can be read as a return from the killing fields to hearth and home. Like the combat veteran, Shane has a history he does not speak of, and he attempts to leave it behind by becoming another kind of man, a farmer like Starrett. Unlike the film, which preserves Shane’s identity as a gunman, Schaefer has him actually put away his gun belt, like a past he wants to disown.
The lesson of the story is that Shane is forever marked by his past. Like the returning veteran forever changed by his experience on the battlefield, he’s fated never to settle down into family life and the workaday world. Most of all, he can never find peace.
There is sadness and a sense of loss as he rides off at the end, but only after there is no longer need for his services as a gunman. His job is done. For Starrett, the range war and the killing are also over, and the novel ends with him at the center of stability and restored order—husband, father, and respected community leader. 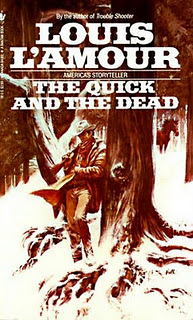 Leonard and L’Amour. But you can tell from Leonard and L’Amour that the conflict at the heart of Schaefer’s story has not been resolved. It comes back even more fiercely in a West where a man must be hyper vigilant and well armed, to protect his property, his wife, and his family. And always it is kill or be killed.
This constant state of high alert bears a strong resemblance to PTSD, a condition found in men and women who have experienced an overwhelming threat to their lives. The condition is not limited to combat veterans but can affect any survivor of extreme violence. Stories like Last Stand at Saber River and The Quick and the Dead are set in a similar high-risk world of constant danger. Their titles even suggest close encounters with violent death.
I’m not a psychologist, and I’m not saying PTSD accounts for the popularity of these three westerns, all of which were made into movies. The parallels do strike me as curious, however. In all the many early westerns I’ve been reading (1880-1915), I have not come across a novel with a plot even remotely similar to this one.
Clarence Mulford’s Bar-20 boys get themselves into high-risk situations and the body count can be high, but his stories are exaggerated beyond any resemblance to reality. His is a dime novel world. Zane Grey’s penchant for intense melodrama can lead a character into extreme situations, but a plot like what we get in Heritage of the Desert (1910) is the familiar one of the hero rescuing a woman from the clutches of an unsavory man.
Leonard’s and L’Amour’s is a different kind of intensity. It goes for raw nerves and primal fears in the reader. And it does so by portraying an assault on the nuclear family, including insults and threats against the welfare of a man’s wife. At a time when many perceive the nuclear family as under attack from all sides—not from foreign invaders but enemies within—maybe the appeal of this theme is understandable.
But it doesn’t fully account for the kill-or-be-killed world in which defense of family and property takes place. A related storyline often found is the revenge plot, in which a man avenges the death of a family member, often a wife or sweetheart. I don’t know how these came to be such prominent themes in westerns, but they are there and apparently there’s an audience for them. I don’t believe it’s because western writers lack the imagination to come up with other kinds of stories.
Wrapping up. We know that death from disease and accident was more prevalent on the frontier than death by violence. For instance, one out of ten Americans back then died of TB. The arid air of the West made it a common destination for people with respiratory illnesses. Maybe in the age of modern medicine and less danger of accidents, readers find it easier to identify with other kinds of threats.
James Reasoner recently commented that the economics of the western favors storytelling that is steeped in mythology. And I can appreciate that. But there’s an appetite for the kill-or-be-killed story that puzzles me, because I do not share it. I’ll be honest here and say so. The historical West will continue to be of more interest to me than this mythical one.
Coming up: Clint Eastwood, Pale Rider (1985)