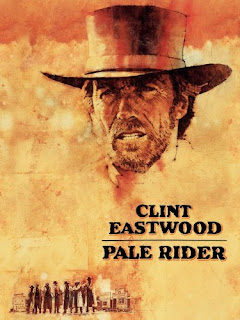 This retelling of the story in Jack Schaefer’s novel Shane is handsome to look at and has notable performances by director Clint Eastwood, Michael Moriarty, and Carrie Snodgress. Eastwood’s “Preacher” gunman is probably closer to what Schaefer had in mind when he created the character in the first place. Many have said that Alan Ladd’s portrayal in the movie is too family friendly. The Shane in Schaefer’s novel is a visitor from a noir world, a killer on the drift from a shadowy past, which is more of what we get here.

Eastwood sticks pretty much to his one-note mysterious gunman role, wearing the same flat hat and long coat that he wore in High Plains Drifter (1973). Michael Moriarty actually delivers more of a three-dimensional performance. He plays a miner, working alongside a community of other prospectors and their families in gold-rush era California. Instead of the cattleman-settler conflict of Shane, we get a corporate boss attempting to run them off their claims.
Boss LaHood’s thugs have license to terrorize the miners, and they are beating up Moriarty when Eastwood arrives in town. He comes to the outnumbered miner’s defense, taking on a gang of a half dozen with an axe handle. The rest of the film involves his providing aid, assistance, and encouragement to the miners.
LaHood has a high tech outfit, under the direction of the young Chris Penn, which operates in a way like strip mining with similarly devastating environmental effects. For those who enjoy explosions, as I do, there is plenty of dynamite pitched into the works by Eastwood and Moriarty to bring this operation to a temporary standstill.
Producing a greater sense of finality is the demise by gunfire of a good dozen thugs, including a small force of deputies in long coats, who look like they may also work as strike breakers. Eastwood takes down all but one. Moriarty does in LaHood.
It should be said that the thugs, LaHood, and the deputies earn their deaths. LaHood's goon squad are hateful, uncouth men. The deputies are like robots. And John Russell is a coldly handsome and business-like lawman who says “You!” before Eastwood empties his revolver into him. I guess there’s some history there that doesn’t need to be explained.
Carrie Snodgress plays a widow with a 15-year-old daughter who has moved in with Moriarty. Both women take a shine to Eastwood in a romantic subplot. In my opinion, this makes an awkward fit into the movie, though it may have seemed daring and exciting at the time. Eastwood honorably and sensibly deflects the daughter’s advances but obliges the mother.
I say “awkward,” but it might be just the ticket for any women in the audience who fancy a vicarious tumble with the likes of Eastwood. All tastefully done, of course. There’s a bird’s eye view of the mining camp after nightfall, and the lights go out in one window.
The film’s ending borrows shamelessly from the movie, Shane. The fifteen-year-old daughter arrives in town, after the killings, too late to say goodbye to Eastwood. She calls out to him as he disappears in the distance, “We love you. I love you,” her voice echoing back from the mountains. Hard not to recall the young Brandon DeWilde calling out “Shane, come back!”
Shot on location in the Sawtooth National Recreation Area and Sun Valley, Idaho, the film has some dramatic photography of snow-covered mountains. The scruffy settlement looks like it was plunked down from the sky and not quite yet lived in. There’s also a little confusion about whether to dust the town with fake snow. Sometimes it’s white as Christmas, sometimes not.
Altogether, I’d recommend this one over High Plains Drifter by a country mile. Pale Rider is currently available at netflix and amazon. Tuesday's Overlooked Films is the much-appreciated enterprise of Todd Mason over at Sweet Freedom.
Photo credits:
Coming up: Marah Ellis Ryan, Told in the Hills (1890)
Posted by Ron Scheer at 6:00 AM