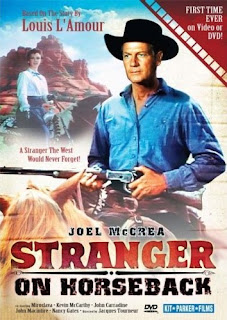 The French may not make westerns, but this western by French-born director Jacques Tourneur shows a bit of Gallic sensibility. Shot in all of 18 days in Mexico and Arizona, it features fine performances by Joel McCrae and John McIntire. It also captures the desert West in warmly muted Ansco Color, a process developed by Agfa in Germany.

The script was based on an early story by Louis L’Amour. While the rest of the characters are chiefly recognizable genre stereotypes, McCrae’s circuit judge Richard Thorne is something of an original. He’s so original that his job has to be explained at the beginning of the film.
Unlike the dark, mysterious presence of a central character like Sam Elliott’s frontiersman in L'Amour's The Quick and the Dead, McCrae is squarely on the sunny side of law and due process. We first see him riding his horse while reading a law book. Arriving in town, he is business-like and resolute in carrying out his duties, even if it means inquiring into a killing by the son of a local cattle baron.
John McIntire is the crusty, blustering ranch owner, who also owns the town. Rather than the two-dimensional heavy often portrayed in westerns, McIntire is more complex. He’s an intelligent man, and his offer of hospitality is genuine. He also recognizes McCrae’s judge as someone not easily intimidated, whose strength comes from the force of the law he represents, not the six-gun.
Kevin McCarthy is the arrogant and over-confident son of the powerful McIntire, never wiping the lop-sided sneer from his face. But it’s a niece, played by the Czech-born actress Miroslava, who has McIntire’s real admiration. Fearless and good with a gun, she rides an uncertain line between loyalty to the family and her growing respect for the handsome circuit judge.
Its story told in little more than an hour, Stranger on Horseback is no B-western. It deftly manages a large cast of characters, including a garrulous Southern lawyer (John Carradine), a second woman (Nancy Gates), her gunsmith father, and the town banker. Republic Pictures veteran and comic actor Emmett Lynn plays a wonderful town drunk, and Emile Meyer is enjoyable as the town marshal, glad to help McCrae take on McIntire and his henchmen.
The film is interesting for its lack of violence. Advocating rule by law, as it does, physical conflict and gunfire seldom result in more than a bloody nose or broken windows. In one scene, a cowboy asking for trouble gets tossed by McCrae into a horse trough. When a gun is drawn, it’s to fire a warning shot or to persuade a reluctant law-breaker to go directly to jail.
The obligatory shoot out comes at the climax of the film as McIntire and his men apprehend McCrae, who is escorting murder suspect McCarthy to the next town for a jury trial. By now McCarthy has caused the death of another man, and Miroslava has switched her allegiance to McCrae.
Instead of resolving the confrontation with a bloodbath, the story has McIntire call the gun battle to a halt and permit his son to face justice in a court of law. And the film ends not with a kiss, a ride into the sunset, or even the killing of the villain McCarthy. In the moments before the last fade out, McCrae enters a courtroom and opens the trial of “the people vs. Tom Brannerman.” We never discover the trial’s outcome. The film’s point about law and order has been made.
The original negatives of this film were lost, we are told, and the version currently available on DVD was restored by the British Film Institute. It can be found at amazon and netflix. Tuesday's Overlooked Films is the much-appreciated enterprise of todd Mason over at Sweet Freedom.
Photo credit: Wikimedia Commons
Coming up: Women writers and the early western
Posted by Ron Scheer at 6:00 AM