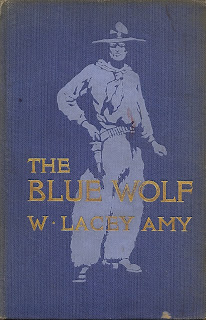 The Canadian West has its writers, and among the earliest was William Lacey Amy (1877-1962), later known as Luke Allan. His first novel, The Blue Wolf, was published in London in 1913. It’s a mystery-adventure set in the Cypress Hills and surrounding prairie south of Medicine Hat, Alberta.