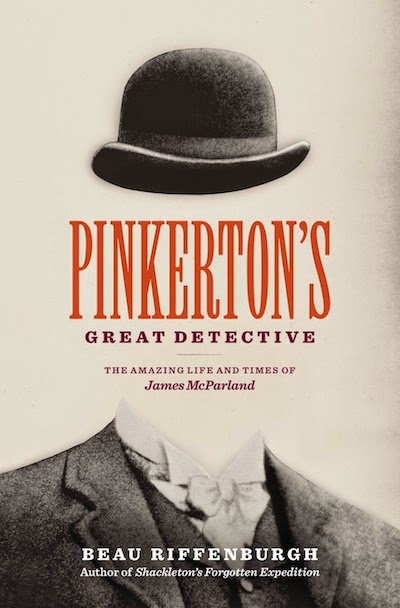 For starters, this book is not about Allan Pinkerton, founder of the famous detective agency. As we discover in the subtitle, it’s about The Amazing Life and Times of James McParland (1843-1919), who headed up Pinkerton’s western division, based in Denver. McParland, in his early career had been instrumental in infiltrating the Molly Maguires, the secret militant arm of a union of Irish coal miners in Pennsylvania.

His success in dismantling this organization was controversial, and remains so today, where sympathies gather in favor of exploited labor against ruthless and unchecked capital. At the time, the 1870s, it gained him a reputation that impressed even the fictional master of detection, Sherlock Holmes. Later years would find him in the hire of mine owners, breaking sometimes-violent strikes with hard-knuckle tactics of his own at locations throughout the West.

McParland, by Riffenburgh’s account, makes an elusive subject for a biography. He boasted of accomplishments that seem not to have been his own, and he seems to have masterfully covered his tracks for anyone attempting to reconstruct his professional and personal life. A man of subterfuge in the pursuit of troublemakers and outlaws, he left little trace of himself in the way of reliably documented records. The result is an account of him that is to a great extent guesswork.

Readers with an interest in law enforcement in the historical West will find the latter half of this book informative. Here we find McParland joined by his most trusted operative, Charlie Siringo. Fearless as was his boss, Siringo was also adept at winning the confidence of labor organizers and thieves, to find his way inside targeted organizations and gather intelligence to be used against them in court—or less admirably, to be leaked to vigilantes.

We learn of the crime-ridden frontier of the 1890s, marked by waves of train and bank robberies. Riffenburgh devotes chapters to the outlaws who drifted in and out of Butch Cassidy’s gang as they repeatedly eluded capture, even gloried in their ability to rob and steal with impunity over a vast area of the West. We also meet Cassidy’s compatriot, Harry Longabaugh, better known as the Sundance Kid.

Caveats. The book’s subject and its title promise more than they deliver. Riffenburgh has done yeoman’s work in piecing together a factual record of McParland’s career, but a reader may be disappointed in the results of his efforts. They seldom add up to what should be a vivid portrait of the man. Dashiell Hammett seems to have had him in mind as the prototype of his fictional agency director, “the Old Man,” known to operatives as “Pontius Pilate, because he smiled pleasantly as he sent us out to be crucified.”

That characterization comes miles closer to capturing the man in words than Riffenburgh’s final admission that McParland “was, is, and forever will remain an enigma.” These two quotes side by side are the best argument for historical fiction over history. (Curious and curiouser, to find the source of that Hammett quote, you have to go to a website online to find the book’s footnotes.)

If you want a ripping suspenseful account of high-risk detective work, Riffenburgh’s book (despite its four pages of acknowledgments and the 5-star reviews at amazon) seems hardly to find much depth or excitement in its subject. Despite its title, it will be not “amazing” for readers looking for both history and a page-turner.

Wrapping up. A historian with a PhD in history from the University of Cambridge, Riffenburgh is described on the book’s dust jacket as the author of books on polar exploration, including Shackleton’s in the Antarctic. Pinkerton’s Great Detective is currently available in ebook, audio, and hardcover at amazon and Barnes&Noble.